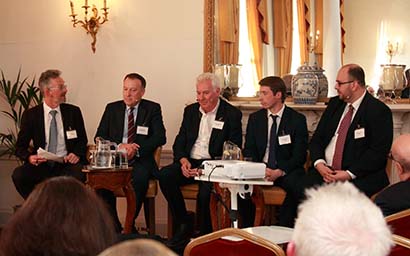 The European FundTech Lab roadshow arrived in Dublin in March for its inaugural Irish event. Ireland has long established itself as a leading domicile for cross-border fund distribution, asset servicing and fund administration. In recent years it has also looked to develop a thriving fintech market with a particular emphasis on the so-called regtech market.

With this in mind, the event began with a presentation from Gerry Cross, the Central Bank of Ireland’s (CBI) director of financial regulation, policy and risk, who talked about the challenge of balancing the protection of the financial market with the encouragement of greater innovation.

To this end, the CBI has developed its own Innovation Hub, which is designed to provide a mechanism for fintech start-ups and other innovators to engage with the central bank and to give the central bank an insight into the ongoing and upcoming developments in fintech. In its first eight months, the CBI has had 78 engagements, the majority of which have been with unauthorised entities and with regtech firms at the forefront.

Cross also touched on other issues such as the regulatory treatment of cryptoassets, a subject referred to recently by the European Securities Markets Authority, as well as the ongoing risks associated with the use of cloud providers and the concern that many firms lack the knowledge and skills to truly understand the service they are receiving and how to effectively oversee it.

A similar worry exists in the fund industry’s use of outsourcing, an issue which the CBI has sought to tackle through its CP86 initiative and a review of fund administration outsourcing arrangements. Cross was also on hand to take questions from the audience, which included concerns about the advancement of artificial intelligence and what protections should be in place in terms of jobs and data privacy.

There was then a panel debate on the role of regtech in the funds industry that covered the changing regulatory burden, from know-your-customer rules to the requirements of MiFID II, and the role of technology in helping to ease this burden.
The panel featured three of Ireland’s most prominent regtech firms – AQMetrics, Fund Recs and Know Your Customer, represented by chief executives Geraldine Gibson, Alan Meaney and director Kieron O’Brien respectively. The panel was completed by Janusz Lorenc, chief executive of software firm Metrosoft.

The primary job for regtech is to reduce the labour demands of compliance but the end goal is to help firms derive some more valuable insights from all the data involved in regulatory reporting, possibly through the use of artificial intelligence and machine learning. However, the panel agreed that the funds industry is still some way off this aim.

The day’s keynote interview featured Clive Bellows, head of Emea for asset servicer Northern Trust, who talked about NT’s growing base in Ireland and the challenge facing custodians in remaining relevant to asset managers amid a changing world.

Northern Trust has attempted to address this challenge through the development of its core servicing platform but also by working with new technology, notably its efforts to establish a blockchain-based service for the private equity market.

The final session of the day focused on a familiar topic – the perennial problem of dealing with legacy systems. The panel, comprising Campbell Brierley, CIO at Calastone; Paul Roberts, CEO at Milestone, Richard Clarkson, principal solutions consultant, Oracle; and Tony Peacham, head of data management and reporting at Amundi, debated questions about what constitutes ‘legacy’ in the fast-moving world of technology development.

There were also some wistful reminisces about legacy systems of the past that became an operational burden, not necessary through any failings of their own but because they are no longer supported, thereby proving that it is possible to be nostalgic about the technology of the past and also excited about the potential of the technology of the future.

Fins out more information about future and past European FundTech Lab events here.