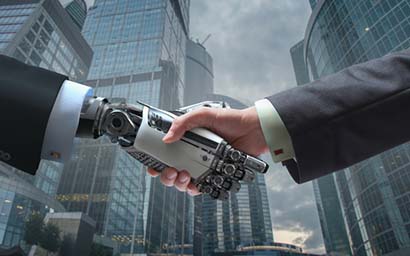 Emerging technology like artificial intelligence and the blockchain have become an area of focus for ETF manufacturers and promoters, finds Nicholas Pratt.

It is fitting that new technology such as artificial intelligence (AI), robotics and the blockchain has become a growing feature in the exchange-traded funds (ETF) market. Investment managers and banks have been highlighting the investible status of AI and the like (see p21), but it is the innovative and efficient ETF that has become the investment vehicle of choice as opposed to the more traditional mutual fund.

Such is the popularity of AI-based ETFs that they have begun a category all of their own on many ETF research sites.

According to ETF Database, which defines an AI ETF as one that has at least 25% portfolio exposure to AI-related companies or uses AI methodologies to select securities for the fund, the top five  AI ETFs  in the US have combined  assets under management in excess of $100 billion (€84 billion).

More than half of that total ($58.6 billion) is taken up by Invesco’s PowerShares QQQ but there are more AI-powered ETFs launching, including the Horizons Active AI Global Equity ETF, which launched on November 1.

This followed the earlier launch of the AI Powered Equity ETF, which purports to be an actively managed fund using AI to beat the market. This predictably led to a string of news stories heralding the arrival of the robots on Wall Street.

While it is clearly too early to judge how successful either ETF has been, it is inevitable that should they perform well over the next quarter, there will be a string of similar funds launched in their wake – a cloning, to keep with the robot metaphor.

This is not to say there are no mutual funds dedicated to new technology. In September, London-based investment manager Polar Capital launched an automation and AI fund that will focus on industrial use of the technology as well as machine learning and robotics. It will aim to outperform the global equity benchmark, the MSCI ACWI Index.

The fund is the first launch since the arrival of new chief executive Gavin Rochussen, who joined from JO Hambro Capital Management  earlier this year, and will be managed by three portfolio managers supported by a further three tech analysts, underlining the resources behind the new fund.

Polar Capital has been a big investor in technology for some time with its two core technology funds managing $1.8 billion and $1.6 billion in assets respectively, but the new AI and automation fund is designed to have more exposure to Japan and Europe (where AI is more prevalent) and a mandate to invest across more sectors, including not just the technology providers but the apparent beneficiaries of the technology.

Beyond Cryptocurrencies
Yet it is the ETF market that is attracting more attention in terms of AI-themed launches and now it is going after blockchain, buoyed by the seemingly (at the time of writing) unstoppable rise of bitcoin.

While banks and investment managers remain skeptical about cryptocurrencies – their lack of regulation and the possibility of a bubble – they are far more bullish on the prospects of the blockchain and other distributed ledger technology.

It is not just the fact that it acts as the supporting infrastructure for cryptocurrencies (akin to the pick and axe suppliers during the Great Gold Rush of the 19th century) but that it has so many possible applications in all kinds of industries.

In October, Swiss bank UBS stated that investing in blockchain was “akin to investing in the internet in the mid- nineties” and predicted that it could add as much as $300-$400 billion to annual global economic value over the next ten years. UBS added that it could have “significant impact in industries ranging from finance to manufacturing, healthcare and utilities”.

In November it was reported that two companies in the US had filed with the Securities and Exchange Commission for the right to launch blockchain-themed ETFs, both claiming that their respective funds would be the first in the market.

One of these companies is Chicago- based Amplify, which has filed for its Amplify Blockchain Leaders  ETF, another actively managed fund offering exposure to blockchain-focused companies. As Amplify’s chief executive Christian Magoon says: “We believe blockchain is a foundational technology that is still in its early stages, much like the internet in the mid-1980s.”

Amplify’s ambitions will be rivalled by Reality Shares, which filed for its Reality Shares Nasdaq Blockchain Economy ETF, a passively managed vehicle designed to “measure the returns of companies that are committing material resources to developing, researching, supporting, innovating or using blockchain technology for their proprietary use or for use by others”, according to its filing.

The Reality Shares fund will base its stock selection on its Blockchain Score, a proprietary ranking system developed by the index providers to identify those blockchain companies expected to benefit most, via economic profit, operational efficiency or transformational business practices, from the innovation, adoption, deployment and commercialization of blockchain technology. The 50-100 companies that receive the highest scores according to the ranking system will be included in the fund and weighted accordingly, says the ETF manufacturer.

Meanwhile, some of the largest mutual funds and ETF manufacturers are looking to the blockchain to simplify and add efficiency to the process of updating the index data underlying some of their index funds, with Vanguard recently announcing a successful test of blockchain-based index updating (see p6). BlackRock has tested the use of the blockchain with its custodian bank clients in order to reduce errors.

In Europe, hedge fund tracker HFR has launched two investable indices to capture what it describes as the “meteoric” performance of hedge funds investing in blockchain technology and cryptocurrencies.

The launch comes just days after the introduction of the first bitcoin futures contracts, a development that has been viewed as a potential pathway for institutional investors to throw off their shackles and become more active in the hitherto volatile and unregulated cryptocurrencies.