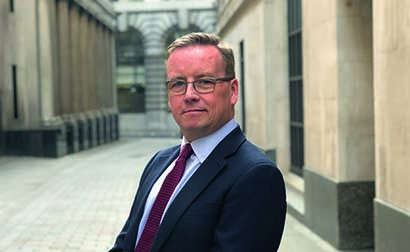 Calastone’s Vince Lucey tells Funds Europe why the industry needs to stop thinking of blockchain in purely technology terms and instead start considering how it can be applied to real-life problems.

A popular fear among asset managers is that some of the new technology is a solution looking for a problem. It is the idea that there is technology for technology’s sake. It is an accusation that has been levelled at distributed ledger technology (DLT) and the blockchain as various market participants search for its most suitable application.

There may not yet be a consensus on what this application is, but what is unanimously accepted is that the asset management industry definitely has problems in need of solutions.

The gravest issue in the current funds marketplace is its inefficiency, says Vince Lucey, managing director of innovation & change at Calastone. Distribution continues to be overly costly. It is partly this inefficiency that has contributed to so many investors moving from traditional, active mutual funds to passive, low-cost alternatives. Why pay hundreds of basis points for a mutual fund when an ETF will cost only tens of basis points in fees and expenses?

It is not just the fund vehicles piling the pressure on mutual fund promoters. There are low-cost non-bank competitors to worry about as well, for example e-commerce giants Tencent and AliBaba were given licence to distribute mutual funds across Asia.

Meanwhile there is the looming threat of big tech firms coming into the marketplace and using their tried-and-tested technology to compete with incumbents lumbered with slow-moving legacy systems. Not only are these legacy systems incompatible with new digital service models and applications, they are difficult to update and expensive to replace in both a financial and operational risk sense.

However, the longer these systems and processes remain, the more they cost to the whole industry, not least because manual intervention is needed to plug the gaps in processing. This in turn leads to errors and exceptions that all need to be investigated and reconciled.

A Deloitte survey on the cost of manual errors revealed that the industry carries more than €330 million in costs due to errors in the course of a year in Luxembourg alone. Given that Luxembourg is the home of distributing cross-border Ucits funds, it should be one of the more efficient regions in the market.

Added to this is the existence of the fax, which is still a feature of the sales and distribution process, even in 2018. “We have clients that still see hundreds of thousands of them every year and are left hoping the paper doesn’t get stuck in the machine, or come out too crumpled,” says Lucey.

“These are all real-life problems which, when combined, create a huge pressure on asset managers to be more efficient.”

Cutting back on costs
These problems are also leading more people to look to new technology and to DLT specifically. Lucey believes DLT has the potential to eliminate up to 70% of the costs associated with the funds distribution chain, which equates to more than £1.9 billion in savings for the industry when calculated across just a few of Calastone’s key markets.

“The best way to solve many of these issues is to share information,” he says. “If counterparties are sure they are looking at the same data, they don’t need to spend time and money on reconciliations. If this can be done on a blockchain that is held between those counterparties, it removes a raft of manual processes. It can also reduce infrastructure costs because there is no longer the need to store all of that data independently.”

But why DLT? “If multiple parties are going to share important data on a shared infrastructure, then the technology needs to be highly resilient and always available,” says Lucey. “You also need a consensus mechanism and authority to add information to the chain. With all of these properties in place, users can be assured that the infrastructure is secure, available, trusted and correct.”

Calastone began investigating the potential of DLT in 2014, which has led to the development of its private permissioned distributed market infrastructure (DMI). It is currently running both systems side by side with data able to transfer between the two networks.

The challenge for the industry is moving from its current legacy set-up, complete with reconciliations teams and manual processes, to one completely based on the blockchain, says Lucey. “How do you migrate an entire marketplace without breaking it or else causing huge disruption? After all, there is no point in having the best technology solution if no one can use it.

“One of the problems in any migration is reducing the need for a market-wide Big Bang moment, which is very hard to plan and is potentially high-risk for all participants. If you want all your trading partners to change over at the same time, it is a lot to co-ordinate,” says Lucey. “The migration path to our DMI allows Calastone clients to migrate to the blockchain in their own time without losing connectivity to their trading partners.”

Once migrated to the DMI, clients will then have the ability to implement new and improved services – for example, faster settlement cycles, electronic-only share classes, etc.

In the long term, the opportunities are exciting: a vision of an Amazon-style operation for funds, offering investors the chance to see their transactions happen in real-time, just as they have come to expect in retail banking and other services.

Deployment
Calastone expects to go live with the DMI early in 2019, confident that it has sufficient scalability and security to be fully deployed in the market. “We have tested extensively and with our full network of more than 1,600 organisations across 36 markets processing over £90 billion.” Calastone is now the biggest global transaction network in the market, says Lucey.

Calastone may be migrating its network onto the blockchain, but it is sticking to its principle of allowing customers to carry on with whatever technology they are currently using for their own processes, as was the case with its efforts to bring more automation to the order routing process with the original transaction network. “It is what Calastone has always done – to connect to any client, regardless of format. We conform to their technology rather than the other way round,” says Lucey.

The hope is that by the time its blockchain version has become fully operational, it will be compelling enough to lead the funds industry to migrate their own processes to the blockchain and gain the operational efficiencies, enhanced customer experiences and elimination of errors that will be needed to make themselves more competitive in the funds market of the future.