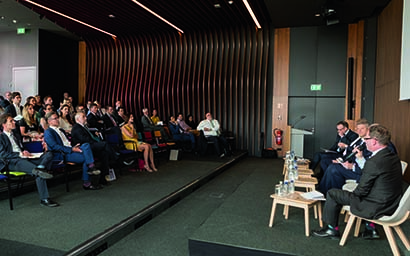 The second FundTech Lab event took place in Luxembourg, where a panel of experts sat in judgement on the asset management industry’s approach to new technology.

And once again, blockchain technology was at the centre of the debate. For some panellists, there is simply not enough recognition of the scale and complexity of many of the industry’s administrative processes when applying the blockchain to the typical manager’s back office.

As befits an event in Luxembourg, the role of technology in compliance was the next subject to be discussed. Regtech has become one of the most vibrant sub-sectors of fintech. Not only are fund managers employing automation and the cloud to greater effect, regulators themselves are also embracing new technology with the likes of the UK’s Financial Conduct Authority exploring a pilot into the creation of machine-readable rules. They are also working more closely with some of the regtech firms in the market.

Three of these regtech firms were featured in our panel, which comprised Susanne Schartz, chief operating officer, Seqvoia; Laurent Denayer, CEO, ume; and Patrick Hilt, chief technology officer, Kneip. Interestingly, the key figures in the regtech market are a mix of long-term compliance professionals looking to apply their understanding of the process to new systems, such as former fund manager, risk manager and now fintech founder Denayer; and Hilt, who spent several years at Skype prior to his role as Kneip’s CTO.

The potential for machine learning and artificial intelligence to be used in the compliance process at some point was also discussed, which raised interesting questions about what the compliance department of the future may look like.

Funds Europe editor Nick Fitzpatrick then interviewed Keith Hale, former CEO of investment fund software firm Multifonds and now a fintech investor and non-executive director. Back in 1991, Hale co-founded the data management company Netik, which was bought by the Bank of New York in 2014.

In his view, technology has not changed in essence in the past 30 years and is “not as unrecognisable” as he thought it might be when he started out as a software developer. One possible reason is that new technology, such as machine learning, has not been properly applied. “It is a fragmented industry at the moment and finding the right-use cases for the technology is a challenge,” he said.

Technology’s aim should be to reduce the cost facing investors. Robo-advice is a major step towards that goal but such disruption is being resisted by the industry’s incumbents and their vested interests, said Hale. The chief culprits are the investment managers, who enjoy a 45% margin while producing a 5% return, not the transfer agents and the custodians who are under ever-increasing pricing pressures.

Idiosyncratic
The final session of the day was on data. A five-man panel explored the challenge of effectively extracting, managing and analysing data and applying the concepts behind big data analytics to the asset management industry.

According to Janusz Lorenc, CEO of Metrosoft, the critical issue is the training of the model. “I don’t see many big players that are using big data properly and that is because there is a lack of data science.”

The funds industry is idiosyncratic in that it primarily pushes products rather than designs or manufactures them, said Fundsquare managing director Olivier Portenseigne.

It is also an industry that has struggled to impose standards – an issue that is seen as critical to improving the use of data. As Calastone managing director and head of continental Europe Henning Swabey said: “Everyone wants you to use their standard.”

Perhaps, said Frank Talsma, associate director, risk and investment data at RBC Investor & Treasury Services, the funds industry can learn from tech firms such as Google and Amazon that excel in using data to help sales. At the very least, it should be more proficient in analysing its own data to find out exactly where and to whom it is selling its funds.