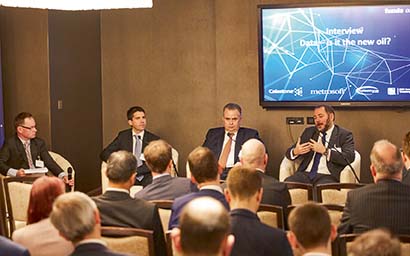 London hosted the inaugural European FundTech Lab event, where speakers and panellists discussed data, distribution, blockchain and the technology of the future.

A select gathering of Europe’s fund management operations experts met in London on March 22 to participate in the first European FundTech Lab event. The aim was to discuss and debate the most critical issues affecting the industry, from the opportunities offered by new technology to the threats of a conservative culture that fosters too little innovation.

With data the first topic on the agenda, the audience heard from Dr Ruben Lara, chief data officer at Aberdeen Standard Investments. Data may be seen as ‘the new oil’, but the chief data officer role is still in its infancy in the fund management world.

Appointed in December 2016, Lara was previously head of big data analytics at Vodafone and held similar roles at other telcos such as the UAE’s Etihad and Spain’s Telefónica. As he explained, there are lessons to be learned from other industries in how data can be used.

Thanks to advancements in data analytics and the growing demands for reporting from regulators and investors, there is no shortage of data. The challenge for fund managers – of what to do with it all – was discussed by a panel comprising Jamie Stevenson, global head of product management for data and analytics, RBC Investor & Treasury Services (IT&S); Richard Hale, head of business development, UK and Ireland, for regulatory reporting firm Kneip; Jon Willis, chief commercial officer at Calastone; and Dr Lara.

The debate then moved to technology’s impact on front-end operations, from fund distribution to the RFP process and from client onboarding to KYC compliance. This time, the panel was made up of Janusz Lorenc, CEO of software firm Metrosoft; Neil Curham, executive director, Alpha FMC; and Rob Sanders, co-founder of Door, a digital platform for fund due diligence.

No discussion of new technology would be complete without a session on the merits of the blockchain and it was left to Dr Ken Tregidgo, the deputy CEO of Calastone, to explain how distributed ledger technology could impact the industry.

The big winners, he said, will be the firms that manage to look beyond the technology and the changes to business models and learn to think differently.

The industry is at an inflexion point, said Davey, with computing power, sophisticated algorithms and vast amounts of data all coming together at once. The danger, though, is that new technology like artificial intelligence is a solution looking for a problem.

Similarly, said Davies, robotics has the potential to improve back-office processes, as long as firms don’t over-invest and are able to adapt to whatever technology comes next.

The final session of the day was left to the consultants – Paul Miller, managing director, Knadel; Jonathan Clark, CEO, Pentagon Consulting; and Steve Young, managing partner, Citisoft – who concluded that the most important issue for fund managers is the culture, and an innate conservatism that, while important for managing other people’s money, is not conducive to harnessing the potential of new technology.