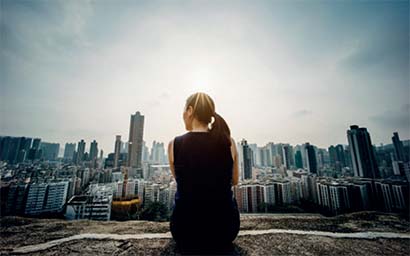 The EU’s Sustainable Financial Disclosure Regulation (SFDR) went live on March 10. It is a central plank of the EU’s action plan for sustainable finance and is designed to bring more transparency around ESG funds.

Efforts to bring greater transparency to the market are welcomed, but some fund managers are concerned that an overly prescriptive approach to ESG [environmental, social and governance] reporting may end up limiting the investment universe for ESG funds and negatively affecting their performance.

Speaking at a webinar on ESG reporting standards held by Funds Europe, Andrew Parry, head of sustainable investments at Newton Investment Management, said: “The reason that people buy investment products is for performance and returns, not for highly detailed reports.”

Parry said the market should reflect on the fact that despite the wealth of reporting, many end investors don’t actually know what ESG is. A survey conducted by Newton revealed that just 23% of its end clients understood the term.

“Demystifying what we do is important, but we must not lose sight of how we use that data to add value to our investors,” he added. “My concern is that we will limit the freedom of choice and our investment universe in the interest of greater clarity of reporting.”

Instead of being overly focused on reporting, ESG funds should concentrate on ensuring they are transparent with their investors and engaging with the companies in their portfolio, he said.

Shelved standards
The market for ESG funds has grown enormously and so have the reporting requirements: not just regulations, but also various ESG ratings companies and global initiatives like the Carbon Disclosure Project or the Task Force on Climate-Related Financial Disclosures.

This has resulted in a complex reporting landscape made all the more challenging by a lack of standardisation for ESG-related data. Front and centre of this landscape is the SFDR.

The regulation was published at the end of 2019 and went live on March 10 – but it has been complicated by the fact that the Level 2 technical standards were published last year, before being shelved because the EU decided there was not enough time to properly consult, according to Mikkel Bates, regulatory manager at FE fundinfo, a fund data platform.

Then, in February, the Level 2 technical standards were republished with quite a few changes, Bates told the webinar. Yet the Level 2 regulations still do not come into effect until January 2022.

This means that across the EU, there are Level 1 regulations. These are not very prescriptive, but are clear about who has to report and when. Bates said that over the next two years, greater prescription will come in.

Parry conceded that while the SFDR has involved a lot of work, it has proved to be a useful exercise because it focused minds on definitions around ESG and sustainability, as well as around clarity of reporting.

“We might have some issues on the level of prescription that will come in, but it does help with identifying the supporting narrative and evidence that goes behind your ESG definitions. I have often said that ESG is a great solution in need of a good definition and the SFDR gives a great framework for considering how to define ESG to your underlying clients,” he said.

ESG reporting has been further complicated by the UK’s decision in the wake of Brexit to divert from the EU’s taxonomy. It is also likely that the UK will adopt a more principles-based approach than the EU’s rules-based stance. There are also different standards within the EU, as well as the growing ESG requirements in Asia and the US.

Meanwhile, funds are increasingly global in terms of both their investors and the companies in their portfolio, adding yet more complexity.

“We are in a global industry and all ESG regulations require you to do a degree of evidencing, whether it’s rules-based or principles-based,” said Parry. “At the end of the day, it is about giving clarity to clients about what you do, the underlying exposures and the motivations behind them.” 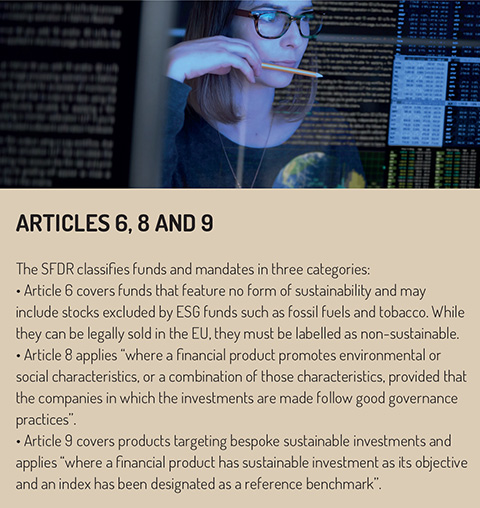 In addition, said Bates, there are the ESG ratings companies, which all have different methodologies on how they rate the various companies and sovereigns. “For the fund managers, distributors or even the end-investors, you need to have some understanding of what the agencies are rating and what criteria they are using. It is not as straightforward as the credit rating agencies.”

One of the obvious challenges is the low correlation between the different agencies. “As an active manager, having different opinions is not a bad thing if you are looking to exploit inefficiencies in the fundamental perception of companies,” said Parry. “But when you are trying to use these ratings as a reporting tool, clients get very confused as to what ‘version of good’ they should use. There are also issues when rating agencies are using AI [artificial intelligence] and the ratings are changing daily when the reality is that the world doesn’t change that frequently.”

ESG funds contain a complex series of nuanced inputs that vary across regions and industries and over time. So, trying to reduce things down to a single rating or score can be very unhelpful, said Parry. Instead, firms should be focused on transparency with their investors and engagement with their investees. “We’ll use the ratings information and triangulate it, but will always try to understand what a company is doing rather than rely on a third party’s rating.”

Model challenge
Numerous implications result from this complex and fluid reporting landscape, the first being costs related to data management and administration, said Oliver Oehri, co-head, ESG product group, FE fundinfo Liechtenstein (formerly CSSP). “The underlying data may be the same, but it is the models that are different and the challenge is being able to reuse that data in more than one model or framework in order to avoid a duplication of effort.”

For example, there will be five data models for the SFDR over the next two years and the cost of those models will rise over time, said Oehri. “Cost is going to be an issue and fund groups have to make a decision as to how many rating agencies they subscribe to, or do they use a consolidator of that data which is rating agency-agnostic. Alternatively, you can use a pay-on-demand approach, particularly if you are a smaller firm with less frequent reporting.”

Another unintended implication of the reporting requirements is that it may affect the credibility of ESG funds and encourage greenwashing rather than prevent it. “The SFDR’s aim is to combat greenwashing, but it has also had to balance comprehensiveness with comprehensibility,” said Bates. “Consumer research into the disclosures concluded that they were too complex for retail investors but too simple for institutional investors. In the end, the regulators chose to ignore that consumer research and stated that the regulations represent a workable compromise within the very difficult constraints of the SFDR.”

Another concern is that setting a very narrow description of what ‘good’ looks like limits investment opportunities, said Parry.

“If you corral everybody into the same stocks, they become very expensive and it is a potential market failure. A broker stated recently that only 5% of European securities would be fully aligned with the taxonomy, yet there are more than 10% of funds labelled as sustainable.”

This may encourage companies to settle for Article 6 status (see box, below) in the SFDR rather than striving for article 8 or 9 because they are worried that they will not have the supporting evidence to meet the tests, said Bates.

One possible solution is for a global authority to step in and standardise the process. But while this would be welcomed, it is unlikely to happen, Oehri told the webinar. “More likely developments [will be] a best-practice approach to regulation based on the SFDR and the TCFD and to client reporting based on accepted KPIs [key performance indicators] and other metrics.

“As for the ESG rating agencies, there is likely to be continued consolidation in the sector until it resembles the credit rating world where there are three dominant players, all using the same basic methodology, and investors take either an average or the lowest score.”

There is also a role for technology in both the collection and calculation of data, Oehri added, particularly the use of automation for reporting that covers multiple languages and regions and for producing the marketing-driven ESG reports for clients. “These cannot be done manually anymore,” he said.