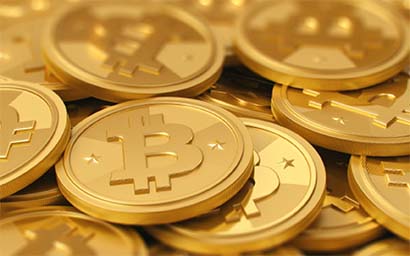 As the price of bitcoin continues to rise, some fund managers are becoming more involved while others continue to shun the cryptocurrency. Nicholas Pratt explores both sides of the argument.

One of the factors behind the recent rise in bitcoin value has been the involvement of institutional investors, from large-cap pension funds to major hedge funds. Yet the fund management industry remains divided on how best to gain exposure to cryptocurrencies or whether or not to gain any exposure at all.

The fund management establishment has historically shunned cryptocurrencies, seeing them as too risky an investment with too much volatility and too little investor protection. Instead, there has been greater attraction to the underlying technology, blockchain, as a way to improve the industry’s infrastructure, or in tokenisation where crypto technology is used to represent tangible assets.

Bitcoin has seen surges before, such as in 2017 when the price dipped above $10,000 for the first time, but the difference this time is the role of institutional investors. A client survey from Goldman Sachs (GS) released in March found that nearly 40% of the 300 clients on its global markets desks currently have exposure to cryptocurrencies and 61% expect this to increase over the next 12-24 months.

According to GS global head of digital assets Matt McDermott, this is “reflective of the demand we’ve seen over the past three to six months”. Based on this demand, GS is looking to resurrect its crypto trading desks.

At the same time, some of the funds industry’s biggest names, such as BlackRock, have become more involved. In February it was reported that BlackRock would add bitcoin as an eligible investment to two of its funds.

In a filing to the Securities and Exchanges Commission in the US, the world’s largest fund manager stated that its Strategic Income Opportunities and Global Allocation funds could use bitcoin futures.

The firm’s chief executive, Larry Fink, had told the Council of Foreign Relations in December that bitcoin was seeing big moves and could evolve into a global market.

At a turning point?
Assets in crypto-linked exchange traded products (ETPs) in Europe exceeded €1 billion in 2020. Speculation is growing that the US authorities will approve crypto ETPs at some point in 2021, which will doubtless boost the market even more.

Meanwhile, the handful of digital asset managers with cryptocurrency funds have seen their assets under management (AuM) surge in recent weeks. Grayscale Investments, a US-based hedge fund, has more than $25 billion in AuM. Its CEO Michael Sonnenshein claims that there is a greater risk for fund managers in not having a crypto fund than there is having one. 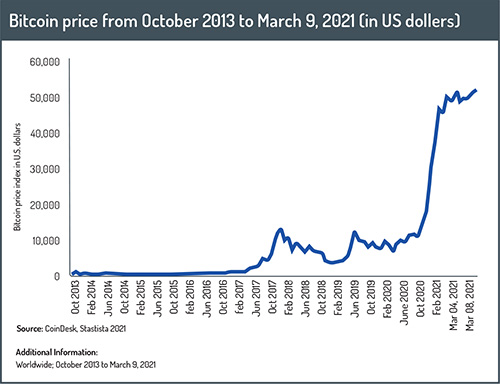 Another US-based crypto index fund, Bitwise, has recently surpassed £1 billion in AuM, leading CEO Hunter Horsley to declare that “crypto is at a turning point” and “professional investors value index funds because they provide exposure while delivering peace of mind that the strategy will be managed and rebalanced as the category evolves”.

This all suggests a softening stance towards bitcoin and other cryptocurrencies. Yet other fund managers continue to voice their opposition and scepticism, dismissing it as a bubble at best and a scam at worst. A recent article in Funds Europe by Research Affiliates vice president of research Alex Pickard stated that bitcoin is almost certainly a bubble and possibly manipulated. And if it is the latter, the losses may not be recoverable.

“Regardless of the reason for bitcoin’s astronomical price movement, investors should remember the sage advice ‘buy fear, sell cheer’ and proceed with extreme caution,” says Pickard.

Regulators are also wary about bitcoin. The UK’s Financial Conduct Authority issued a stark warning in January regarding firms offering investment in or linked to cryptoassets offering high returns. “If consumers invest in these types of product, they should be prepared to lose all their money,” said the watchdog.

It is a dilemma for the funds industry. Should it stick to scepticism and avoid a crypto crash, or is it failing its investors by refusing to get involved in an asset that is skyrocketing in value? Alternatively, is there a way for fund managers to get exposure to the rise in value without being directly linked to a crash? For example, would a bitcoin ETF achieve such a strategy?

Sat on the sidelines
Meanwhile, there are a growing number of funds dedicated to cryptocurrencies in both Europe and the US in addition to the likes of Grayscale and Bitwise. ARK36 launched in October 2020. The Danish managers delivered a 118% return in the last quarter of 2020 for their Cyprus-licensed fund.

The fund is actively managed and invests in multiple digital currencies, mainly trading on the long side of these assets based on the potential of cryptocurrency as a long-term asset class. It is targeting professional investors.

One of the biggest beneficiaries of bitcoin’s surge has been Grayscale. The firm has nine funds that are aimed at institutional investors, mostly large-cap pension funds and hedge funds, looking for exposure to cryptocurrencies but concerned about a lack of regulation.

“We identified early on that institutional investors wanted exposure to digital currencies but most of the currencies were outside the regulated market, so the investors sat on the sidelines,” says Sonnenshein.

Although the funds are passive, they are not traded on an exchange. Instead they are closed-end funds traded over the counter to qualified investors. Some can be traded on secondary markets to retail investors, but the majority of investors are institutional.

The funds are all Delaware Trusts with daily subscriptions. Two of them are SEC-reporting companies, while the other seven are licensed under the US Alternatives Reporting Standard.

Sonnenshein is not surprised by the increased involvement of institutional investors and says that it was a matter of when, not if. “That narrative really picked up in 2020, not least because digital assets bounced back relatively quickly after the massive deleveraging that took place during the initial Covid-19 pandemic and worldwide lockdown,” he adds.

“Institutional investors see bitcoin as the new gold. Many of them are rotating out of gold and into bitcoin,” he says. “They appreciate that gold has been around for ages, but we are in a different world now. It is more digital than physical and cryptocurrencies have more portability.”

Scarcity
In addition, the massive fiscal stimulus and quantitative easing caused by the pandemic has led to a concern among investors that fiat currencies are being diluted and therefore compare negatively to the relative scarcity of bitcoin.

An important property of the cryptocurrency is there will only ever be 21 million bitcoins created, unlike other commodities where supply increases in line with demand, says Sonnenshein. There are currently 18.5 million coins in circulation at present, but it is likely to be 2140 before that last bitcoin is produced. In the meantime, investors can predict the amount of coins in circulation at any given moment, he adds.

In some ways, these properties make bitcoin the ultimate long-only asset, says Sonnenshien. He also argues that the bigger risk for investors now is not being involved in bitcoin and criticises those firms that have shunned cryptocurrencies, preferring security tokens instead.

“Security tokens will evolve but it is still very, very early days,” he says.” Many of the products are solutions looking for problems. So, investors are missing out if they take that approach rather than digital currencies.”

Sonnenshein says that he has seen a material uptake from pension funds looking for a long-term horizon and to alternatives to generate returns. But there have also been warnings about bitcoin trusts such as Grayscale, noting that the value of the funds can deviate from the value of the bitcoin they hold. For example, the demand for Grayscale’s flagship fund was so high in December that its price reportedly soared to 40% above its net asset value, namely the market value of all the bitcoin it holds.

As Coutts head of asset management, Mohammad Kamal Syed, notes, all assets experience ups and downs, albeit not that extreme. The problem with bitcoin is that you cannot tell which direction it will go. “Bitcoin is an entirely speculative asset,” says Syed. “It has no intrinsic value in itself and no real connection to the general economy.”

Other ‘stores of value’, like gold, have a well-understood relationship to economic conditions and, particularly, inflation, based on a track record going back thousands of years, says Syed. “How bitcoin is influenced by underlying economic conditions – if at all – is not well understood.”

A further factor behind bitcoin’s surge in value is market liquidity, he says. “A decade of low rates has meant there is a great deal of money available for investors and, arguably, the availability of investments hasn’t kept pace,” says Syed. “This makes alternative assets like bitcoin attractive, especially when bond returns are so low.”

But, he adds, making money on assets like bitcoin is not the same as proper investment where you earn money through the long-term strength of companies and the economy.

“It can look a little dull compared to the thrill of taking on the hedge funds or being at the cutting edge of a bold experiment like bitcoin,” says Syed. “But traditional investing – based on an understanding and analysis of corporate and economic data – remains one of the best ways to access sustainable returns in the long term.”