A number of newly launched funds hint at a risk-averse attitude among some investors. Meanwhile, data on domiciles shows Luxembourg is still dominant. George Mitton reports

Of the 595 funds registered for sale in Europe in the first quarter of the year, it is interesting how few were of the conventional asset types. Although equity funds were the most numerous, at 113, they accounted for less than a fifth of the total, while bond and equity funds together made up a little over a third.

Data provided by Lipper shows that funds of funds took a large chunk, accounting for 107 launches, but perhaps a more significant trend was the large number of guaranteed, protected or target maturity funds. Put together, these categories accounted for nearly as many launches as equity funds. Analysts have speculated that uncertainty in the eurozone, fears of rising inflation and a general sense of unease about markets could push investors towards savings products that offer explicit guarantees. The evidence suggests they will not be short of funds to choose from.

The most prolific launcher of funds in the quarter, Belgian bank KBC, released 17 protected funds. These included funds from its EquiSelect range, which aim to protect 100% of the initial value invested. In total, the firm launched 22 funds through its Belgian or Luxembourg divisions. 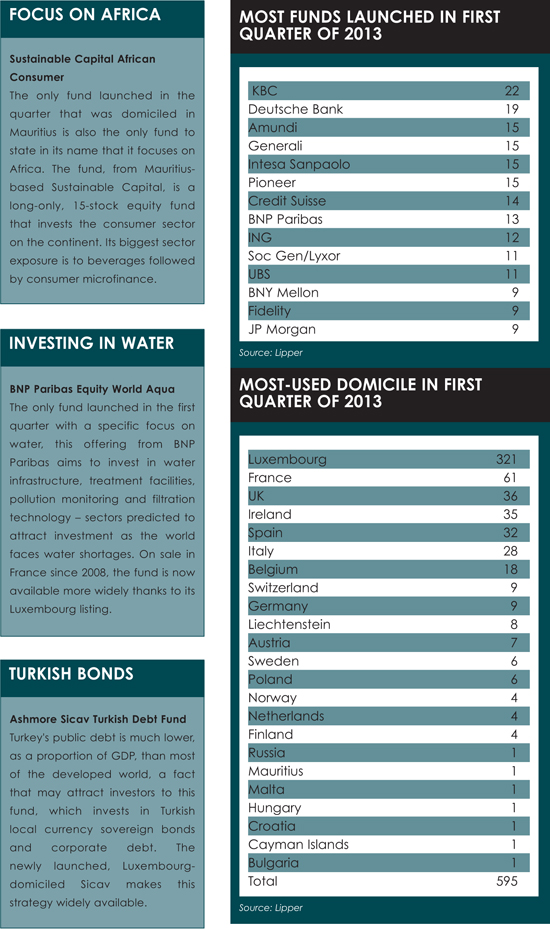 Deutsche Bank came next with 19 launched, a mixture of equity, bond, commodity and derivative funds, along with funds of funds and target maturity funds. Four companies were tied for third place with
15 launches each: Amundi, Generali, Intesa Sanpaolo and Pioneer.

The number of launches in the first quarter is in line with the trend seen in 2012, when 2,200 funds were launched, leaving a total of nearly 32,000 by the end of the year. As ever, a mixture of educated guessing, market research and, perhaps most importantly, learning from rivals’ success can help fund providers decide what products to launch.

“If a promoter has a product that is successful, human beings will by nature try to replicate that,” says Tom Carey, partner at law firm Carey Olsen.

DOMICILE
Luxembourg continues to dominate as the domicile of choice for European funds. More than half, 321, of the newly launched funds were domiciled there. For comparison, the second most popular domicile, France, accounted for less than a fifth of this sum, 61 launches.

Ireland was not so popular among companies launching funds in the first quarter, however. Only 35 of the newly launched funds were domiciled in the country, making it only the fourth most-used domicile in the quarter behind the UK.

Belgium was the domicile for 18 products launched in the first three months. After that, there were a string of countries that were domicile to fewer than ten products each. Switzerland and Germany had nine product launches each, followed by Liechtenstein, Austria, Sweden, Poland, Norway, the Netherlands and Finland. The variety of names shows how many options fund firms have.

At the bottom of the list were seven countries that were domicile to just one fund each. These products included a rouble-denominated bond fund, a money market fund denominated in Hungarian forints and Swiss-bond fund domiciled in the Cayman Islands.