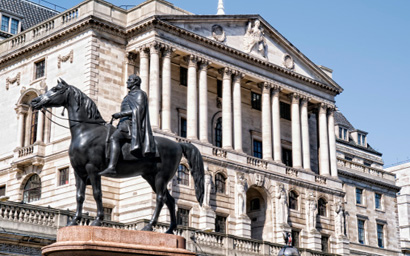 Neil Williams, group chief economist at Hermes Fund Managers, says that a rise in interest rates could come before the end of this year.

Following yesterday's Bank of England (BoE) inflation report, Williams says: "Financial markets are writing off the notion of a rate hike before Christmas. Yet, with GDP growing at potential and about to be revised higher, inflation probably troughing, and the Monetary Policy Committee [MPC] mindful of bubbling house prices, the first, 25 basis point hike could come sooner."

Mark Carney, governor of the Bank of England, said as he released the Inflation Report August 2014 yesterday that any increases in the interest rate were likely to be gradual and limited, but added that this was "not a promise".

Williams says: "I still expect him to cap the peak Bank Rate at 3%, supported after 2015 by pulling on the other monetary 'lever' – selling back the gilts bought under quantitative easing – which also takes cash out of the system."

Abi Oladimeji, head of investment strategy at Thomas Miller Investment, says a slow and steady approach to raising interest rates is important. He says: "The popular fixation on the precise timing of the first rate hike is not particularly useful. Clearly the next step in the policy normalisation process is for rates to start to rise, albeit slowly—and investors should position their portfolios accordingly.

"From an investment management perspective, far more important is the probable path and peak in interest rates. In this regard, when the BOE eventually starts to raise rates, it should only do so at a gradual pace."

He predicts that the peak level of interest rates will be lower than the historical average, based on the current pattern of the global economic recovery.

The BoE expects inflation to remain around 2%.

The inflation report shows expansion progressing well and sustained economic momentum looking more secure. Unemployment has fallen dramatically and is now expected to drop below 6% by the end of the year, a considerable improvement on previous forecasts and a contrast to estimated pay growth for 2014, which has been halved from 2.5% to 1.25%.

Steven Bell, chief economist, at F&C Investments, agrees with suggestions that rates may rise before Christmas.

"I've felt for some time that base rates will rise November this year or next February. But that depends on how wages develop and any forecast of those is definitely unreliable."

He also says the report was as much about Carney himself as it was about the economy. "The BoE's official remit is simple: to keep inflation close to 2% and, subject to that, to promote stable economic growth and stability. But the more pressing goal of the governor was to quash the growing sense that he personally is a source of instability."

Bell believes that an inconsistent approach, swinging from dove to hawk and back again, has left many agreeing with the suggestion from Treasury Select Committee member Pat McFadden, that Carney is "like an unreliable boyfriend".

Bell says: "Mr Carney did give an important clue about when the BoE would start raising rates: when prospective wage inflation picks up. That may seem to give them plenty of breathing space, given that wages appear to be falling. But the last year has shown that the UK economy can deliver rapid and dramatic surprises."