Event-driven Ucits hedge fund strategies have emerged as a favourite over the past year as investors warm to illiquid strategies. Stefanie Eschenbacher looks at developments in the alternative Ucits sector.

The share of event-driven hedge fund strategies launched in Europe under the Ucits banner has quadrupled to 8% over the past year, indicating that investors are prepared to invest in illiquid strategies that offer the chance of good yield.

Hedge fund Ucits strategies first became available under the Ucits III directive – which broadened the range of instruments these regulated funds can use, including derivatives – and the sector has since seen three-digit growth rates.

“Typically, the market is dominated by long/short and macro strategies, but we are seeing more illiquid strategies coming to the market under the Ucits regime,” says Amy Bensted, head of hedge fund products at the research and consultancy firm Preqin, which produced the data.

For the first time, there has been an increased appetite for event-driven Ucits hedge funds this year. “This is something we have not seen before,” she says, adding that there is still a much stronger appetite for long/short and macro funds.

PLAYERS
Lyxor Asset Management has been one of the more active players in the Ucits hedge fund space, having launched three products over the past year. The Paris-based asset manager has $110.8 billion (€81.7 billion) of assets under management, $20.9 billion of which are invested in alternative assets.

The Lyxor/WNT Fund, customised by Winton Capital, and the Lyxor/Canyon Credit Strategy Fund, by Canyon Capital Advisors, are both event-driven strategies. The Lyxor/Tiedemann Arbitrage Fund, by TIG Advisors, is a merger arbitrage strategy.

Nathanaël Benzaken, deputy head of alternative investments at Lyxor Asset Management, says these strategies were chosen because they are underrepresented.

“We want to come up with managers who are competitive and where there is little competition in the market.”

Preqin data show that long/short strategies accounted for 33% of fund launches year-to-date, macro strategies for 38% and relative value for 15%.

With the exception of event-driven strategies, these proportions have changed little in the past year. While still the most sought-after strategy, equity long/short strategies have lost some ground. In 2011 they accounted for 55% of all fund launches, but their share has dropped to 33%.

Preqin’s database comprises 730 Ucits hedge funds, 650 of which European investors can allocate to. While there are a few large funds, Bensted says the Ucits hedge fund universe is dominated by smaller funds.

The largest fund in Preqin’s data base is the Standard Life Global Absolute Return fund, which has $30.4 billion of assets under management. “This is absolutely the giant of the industry,” she says, adding that the fund’s assets are three times larger than those of its nearest competitor, JP Morgan Asset Management’s JPMIF Opportunity Fund.

She says it is a challenge for many Ucits hedge funds to gain enough assets to make the strategy economically viable. Among hedge funds, $50 million is considered the break-even point where asset managers make a profit after covering management, operational and technology costs.

The performance of Ucits hedge funds tends to lag those of other hedge funds, which Bensted says is a result of the need to be liquid. “Some investments might need a longer timeframe, which is not always possible because of liquidity requirements in Ucits. Correspondingly, they have lower volatility and lower returns.”

However, she says the attraction of Ucits hedge funds does not necessarily only lie in their performance but also in the fact that they deliver better risk-adjusted returns and are more liquid.

“Performance of Ucits hedge funds has been, to some extent, disappointing when compared to other types of hedge fund structures. But they allow investors to get exposure to hedge fund strategies in a regulated way,” Bensted adds.

Benzaken says in the Lyxor/WNT Fund, for example, commodity derivatives had to be taken out of the non-Ucits hedge fund because they are not eligible under the Ucits regulations. “When we backtracked the performance, it was still competitive and in line with that of the hedge fund.”

UPSIDE
Similarly, the Lyxor/Canyon Credit Strategy Fund had to be adjusted, though he says while the Ucits hedge fund version lagged the non-Ucits fund only by three percentage points in terms of performance this year.

The Lyxor/Tiedemann Arbitrage Fund, on the other hand, complies with the requirements of Ucits.

All the team had to do is ensure that the strategy can go short using derivatives permitted under Ucits.

These similarities were also taken into consideration when it was decided how to structure fees. Disappointed investors have put pressure on hedge funds to roll back their fees, which average 2% of assets under management for the management of the fund and 20% for outperformance.

“We have been actively negotiating the fees for clients to somehow compensate the higher cost of the Ucits structure and the liquidity premium.”

Cost is an important factor for New York-based Neuberger Berman, which launched its first Ucits hedge fund product this year, the Neuberger Berman Absolute Return Multi-Strategy Fund. Of its $227 billion of assets under management, $18 billion are invested in alternative assets.

Fred Ingham, head of international hedge fund investments, says Neuberger Berman wanted to provide “fairer and more equitable means of accessing alternative investments”. He says investors could potentially benefit from the diversification of investing in hedge funds but have not done so for reasons of fees, illiquidity, opacity, and a lack of corporate governance and control of assets.

“We wanted to offer investors the upside of hedge fund strategies but take away the structural impairments.”

Ingham says the idea was to create a fund that is fairly priced, stripped of performance fees and excess expenses, with a high level of liquidity, transparency and accountability. He adds
that under Ucits the assets are appropriately governed, without the risk of getting suspended, gated or locked up. “Hedge funds become a really interesting and attractive asset class once you take away the structural impediment.” 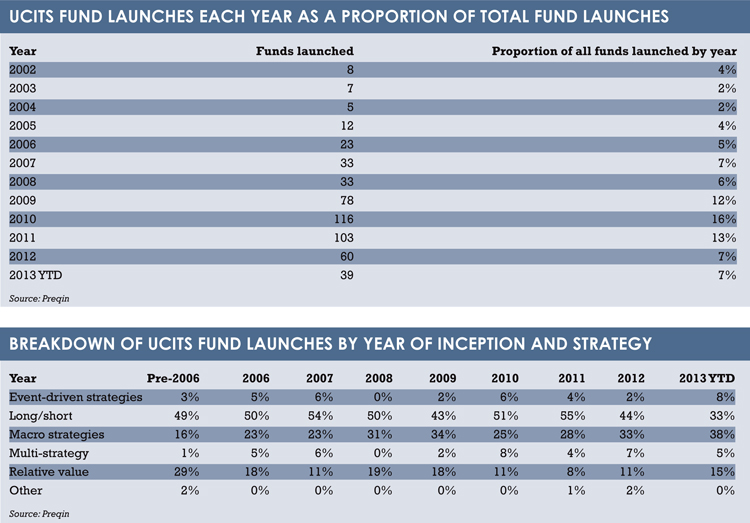