As fund managers recover from an immensely challenging year, George Mitton finds out which of the 50 largest firms launched products, in which asset classes, and which strategies they favoured.

The summer sell-off was damaging for many fund managers. As the market adopted a low risk strategy, stock prices tumbled. But an interesting result of our survey of fund launches in the six months ending 30 September, 2011 is that asset managers nevertheless launched a range of new equity funds.

Funds Europe contacted the top 50 asset managers in Europe by assets under management and received information from 17 firms about 66 funds. Equities were by far the most popular class, accounting for nearly half, 28, of the funds. 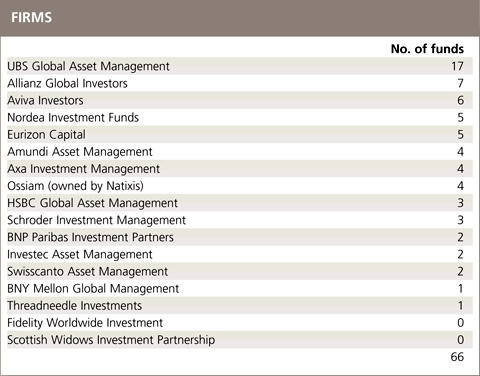 Other asset classes were not nearly as well represented. There were eight investment-grade corporate bond funds, seven funds focusing on emerging market bonds and seven multi-asset funds. There were a handful of multi-bond and sovereign bond funds; and  five real estate funds, all from Aviva Investors.

UBS was the most prolific provider in our survey with 17 launches, most of them exchange-traded funds (ETFs). Its performance shows the firm’s product development team were hard at work despite the bad press its parent company received this year when an alleged rogue trader lost over two billion dollars.

Allianz Global Investors came second with seven new funds that display an international focus: four global, two Asia-Pacific and one focused on the United States, followed by Aviva with six launches – most of them UK real estate funds – then Nordea Investment Funds and Eurizon Capital with five each. 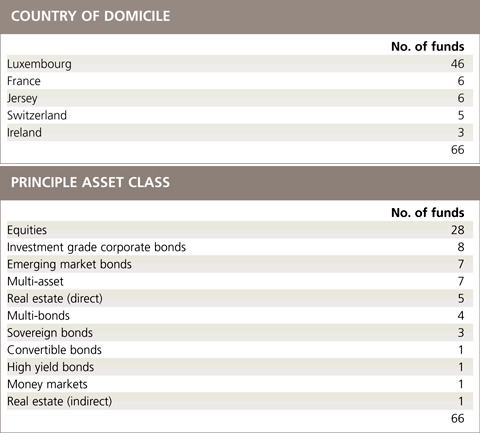 Nearly 80% of funds said they invest directly into their asset class. However, there was a significant minority of seven funds which rely on derivatives. All of these were ETFs that use swaps to gain exposure to their index.

UBS had two, BNP Paribas Investment Partners had one and the remaining four were from Amundi.

Swap-based ETFs have come under increased scrutiny this year from critics, mainly from the world of active management, principally because of their exposure to counterparty risk. But it seems several providers are confident enough to launch new products despite the criticism.

The results were similar to those of the previous Funds Europe survey, when we asked managers about funds launched in the nine months ending 31 March, 2011.

There was another key difference. In the last survey, there were several Ucits-compliant long-short funds and providers seemed to be divided about whether to describe their products as hedge funds or not – 40% did, and the rest did not.

This dispute is irrelevant to the current survey as there were only five long-short funds. Only one, the Threadneedle Global Opportunities Bond fund, describes itself as a hedge fund. The other four are Ucits-compliant but do not use the hedge fund name: they include products from BNY Mellon Emerging Markets Local Currency Investment Grade Debt fund, AXA WF Optimal Absolute, the BNP Paribas Double Garantie Juillet 2017, and the Schroder GAIA CQS Credit.