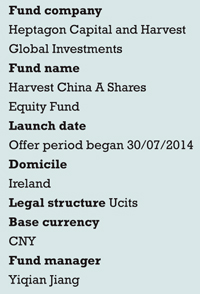 HARVEST CHINA EQUITIES
Investors have another fund to access the Chinese equity market due to a joint venture from London-based Heptagon Capital and Harvest Global Investments, one of the largest Chinese asset managers with more than $50 billion of assets.

Heptagon’s founding partner Fredrik Plyhr says that with the Shanghai composite trading at its cheapest level on record, the launch’s timing is “opportune”.

Heptagon has launched the fund on its Irish Ucits platform and Harvest Global Investments acts as sub-investment manager.

The fund was launched under the renminbi qualified foreign institutional investor (RQFII) programme, which allows asset managers to raise offshore renminbi and invest it in China. 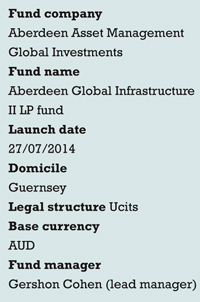 No wonder, then, that Aberdeen Asset Management has succeeded in raising institutional assets from Asia for its fifth infrastructure fund.

The firm says its 24-person infrastructure team, which already manages $2.2 billion (€1.6 billion) spread across 90 investments, has a bias towards greenfield projects in politically stable countries where government procurement policy is clear. In a statement, the firm mentions Australia, which it says is an active market for public-private partnerships.

Aberdeen Asset Management says activity is increasing in North America, despite the complexities of a state-by-state procurement regime. “The interest in this fund is an insight into the increasing demand from institutional investors who are attracted by the potential for a stable income over a sustained period,” says Andrew McCaffery, global head of alternatives at Aberdeen. 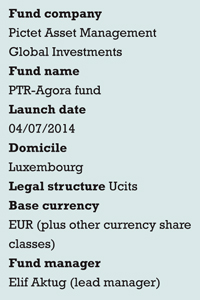 NEUTRAL IN EUROPE
Pictet Asset Management has had a European long-short strategy for three years as a Cayman Islands-domiciled fund, but says the time is right to relaunch the strategy under the Ucits banner.

The PTR-Agora fund aims to profit from predicting market events such as corporate restructurings and mergers and acquisitions. The fund takes both long and short positions in a bid to remove market risk.

“We believe the availability and cost of financing, the strength of European corporate balance sheets, the search for non-organic sources of growth and the growing stability of the economic environment, all point to a continued pick-up in M&A activity,” says Elif Aktug, lead manager of the three-person strong team.

The PTR-Agora fund is one of five strategies in Pictet AM’s Total Return fund range. 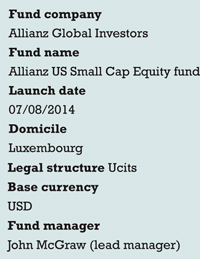 SMALL IS BEAUTIFUL
Allianz Global Investors has offered US investors access to small-cap equities for more than two decades – now it has announced it is letting European investors in on the action.

The Allianz US Small Cap Equity fund mirrors the strategy of the firm’s existing small-cap US equity fund, launched in 1993, and is managed by the same team in San Diego led by John McCraw.

The fund, which is benchmarked to the Russell 2000 Growth Index, will invest in US companies with market capitalisations of between $100 million and $3 billion.

“Giving UK and European investors access to our time-tested US small cap strategy is a natural addition to our wider global small cap franchise,” concludes McCraw. 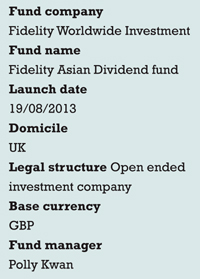 ONE YEAR ON
Although Asian equity markets – like those of all emerging markets – are perceived to be about growth, Fidelity Worldwide Investment says half the total returns of equities in the Asia-Pacific region since 1999 have come from reinvested dividends.

Last August, the firm launched the Fidelity Asian Dividend fund, aiming to invest in between 60 and 80 income-generating stocks in the Asia Pacific region, excluding Japan.

Fund manager Polly Kwan said the aim was to deliver long-term total returns “with less volatility than other strategies exposed to the Asian growth story”.