Talk to senior staff at French asset management companies and you are likely to hear the same argument: business is good, but not in France.

Executives are happy to report inflows from Asia, North America or the rest of Europe. They may be keen to discuss acquisitions or expansion plans. But in their home market? A Gallic shrug, a wave of the hand, a frown.

What is the trouble in France? If you look at the retail market, the main problem is that the banks are still responding to post-financial crisis regulation that requires them to improve their capital positions. In this climate, the banks want as many assets on their balance sheets as possible, hence they want to prioritise on-balance-sheet bank deposits over mutual funds. Put simply, most of the banks don’t want to sell mutual funds and, to a large extent, French retail customers aren’t buying them.

A SHRINKING MARKET
“The French market is very difficult,” says Yves Perrier, chief executive officer of Amundi. “The retail banks have a policy of arbitrage from off balance sheet to on-balance-sheet assets, to improve their ratio of deposits.”

It shows how difficult the French market is that Amundi, the largest asset manager in France by assets, saw an €8.1 billion net decline in its flows from French retail networks in the first half of 2013, compared with the previous six months.

Largely because the French network flows have been so bad, Perrier concedes his firm is unlikely to attract as much net new money this year as in 2012, despite strong inflows from foreign networks, institutions and third-party distributors.

“We have consolidated our position in France, but in a market that is shrinking,” he says.

Amundi must compete for French retail customers not only with the banks but with life insurance companies and government-regulated savings products such as Livret A, a tax-free savings account.

The asset management industry has complained for years that its funds do not enjoy the same tax advantages as other savings products, a state of affairs that many do not expect to change.

Perrier says the solution to this malaise is to be aggressive in foreign markets, and tireless at improving efficiency.

“The whole industry will be under pressure. The relevant strategy is to be offensive in new markets with new products, and be efficient on cost. The combination of these axes will make the difference between success and failure.”

Amundi has tried to increase its foreign exposure through acquisitions such as the purchase of Smith Breeden Associates, a US-based institutional asset manager specialising in US fixed income, which has $6.4 billion (€4.7 billion) under management.

The firm is also present in a number of Asian markets and Perrier says he hopes to increase the amount of assets it gets from the continent to $100 billion in five years’ time, up from $70 billion now.

Saving costs, meanwhile, is a constant battle at which Perrier has a reputation as a brawler. He says Amundi has closed half its funds since 2008 and is only two-thirds of the way through this process of rationalising its range. Along with other measures, this strategy has so far reduced Amundi’s costs by 30%, he says.

PRICE OF INNOVATION
Joseph Pinto, global head of markets and investment strategy, Axa Investment Managers, says his firm has also tried to control costs by stopping unpopular funds. He says the firm aims to rationalise 100 funds a year, though this is not a net figure since the firm launches new funds all the time.

“One way to cut costs is to stop paying for legacy products that are irrelevant to investors,” he says.

The firm does not spare newly launched products. Pinto says about five of the 25 or more funds launched since 2010 have been terminated, remarking that “this is the price of innovation”.

Besides cutting costs, Axa IM spends time ensuring it offers a range of products, some with low fees and some with high fees. The high-fee products are important because they tend to yield bigger profit margins.

“We have to pay attention to the product mix,” he says.

Axa IM has found its US high yield bond funds to be profitable in recent months because they are have high margins. He adds that the firm’s banking competitors have lots of assets in money market funds, at very low fees, which do not make up a large part of Axa IM’s assets under management.

The firm must update its product range to respond to trends such as a decline in demand for country-specific funds in favour of global equity funds, he says.

“The products we sell today are not the ones we sold twenty years ago.”

A BORING COMPANY?
Not every asset manager in France shares the concerns of Amundi and Axa IM at having a wide range of products, though. France’s many boutique asset managers often seek to attract inflows based on a handful of products. Probably the largest boutique asset manager in France is Carmignac Gestion. Didier Saint-Georges, member of the investment committee at the firm, says Carmignac has no plans to launch any new products soon. 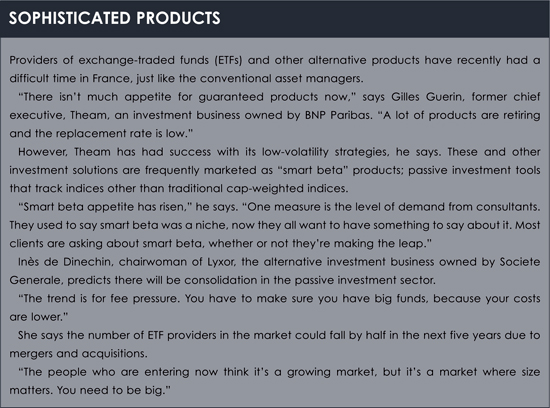 “We don’t try to create products to please the market. We first try to deliver on the products we already have. In a way, one could say we are a very boring company.”

Carmignac has been trying to expand its business, however. In 2012, the company opened a UK office and Saint-Georges says Carmignac funds are now on several UK distribution platforms. Maxine Carmignac, daughter of company founder Edouard Carmignac, has moved to the UK to be head of the London office.

“We are aiming for strong long-term performance based on a tight model. We |are keen to avoid over-extending ourselves.”

With all the challenges facing French asset managers – low fees, competition from bank deposits – some have forecast an increased level of consolidation, as weaker players are bought up by larger firms that are better able to realise economies of scale.

Perrier, at Amundi, expects to see more mergers. “This industry will continue to consolidate. There is pressure on revenues and profitability. Some asset managers are subsidiaries of banks, and banks are under pressure regarding their capital base. They may sell asset management units to realise gains.”

A hint of a smile passes over Perrier’s face when asked if Amundi has any significant acquisitions planned, but the chief executive would not give any names.

“We look permanently but it’s a question of opportunities,” he says.