In theory, absolute return bond funds should make money in all market scenarios. But when they are tested, such as during the 2013 taper tantrum, not all succeed. George Mitton reports.

“It was a prime example of how you can’t time the market,” says Torsten von Bartenwerffer, head of strategies and portfolio management at Aquila Capital.

He is recalling the launch of the Aquila Capital Risk Parity Bond Fund at the end of June 2013. The fund aimed to spread its risk across a range of uncorrelated fixed income assets to provide a positive return even in challenging market scenarios.

Unfortunately, the fund had launched amid a period of extreme turmoil in the fixed income markets. The previous month, the then US Federal Reserve chair, Ben Bernanke, prompted a mass sell-off when he hinted the Fed would soon begin tapering its bond purchases.

Bond markets went haywire with emerging market debt and high-yield bonds particularly badly hit. Only a few weeks into its public life, the Aquila fund was faced with a daunting challenge.

FINDING GOLD
The term acid test derives from a procedure that uses acid to distinguish gold from base metals. Over the years it has come to mean any challenge that proves an item’s worth. For absolute return bond funds, there can be fewer more stringent tests than the so-called taper tantrum that followed Bernanke’s hints.

Bond fund investors were watching carefully – this was precisely the traumatic scenario they wanted their absolute return funds to protect them against. The claims in fund brochures about how their products could offer downside protection were at stake.

How did the Aquila fund perform? It lost 3% in the three-month period between June and September. Not the start von Bartenwerffer hoped for.

“We launched it at a very bad time,” says von Bartenwerffer. “But, compared to what other funds lost in that period, 3% is not so bad.”

TEST POINTS
Market periods such as the taper tantrum are important because investors tend to focus on them when researching which funds to buy. If you are the manager of a fund that aspires to deliver a positive return in all market conditions, you had better have a good reason why your fund lost money during the tantrum. Remember, many investors were hit hard by poor performing “absolute return” funds in the financial crisis.

“There were a lot of alleged absolute return bond products in 2007-08 which proved in that environment that they weren’t anything of that name,” says Peter Martin, head of manager research, JLT Employee Benefits. “They spectacularly failed and a lot of them disappeared.” Experiences such as the crisis have taught consultants such as Martin to be wary. He notes that there are a lot of products on the market which claim to deliver an absolute return, but of this growing product set, “I like very few”. Traditional, long-only asset managers tend to want to launch absolute return products to benefit from the fashionable name, he says, even though they do not have the skill or the mindset to deliver what they promise.

What, then, are the main factors Martin would consider when assessing an absolute return bond fund? The nature of the risk-offsetting positions in the fund is an obvious place to start. Different funds will have a different range of options at their disposal, whether it’s being able to take exposure to volatility, to equity options or credit default swaps. “The main issue for these funds is when the world does something strange which they can’t anticipate. That’s when these mitigants come to the fore.”

Tied to the issue of risk mitigants is how a fund manages its derivative exposure and the accompanying cash pile it must keep as collateral. Martin would want to see this cash managed sensibly and not stored with only one custodian, which would increase counterparty risk. “There was one manager who needed 30-40% cash to support derivative positions. When I found out that it was all with one counterparty, that’s where the conversation ended.”

Then there is the question of fees. Martin says some asset managers, if not being outright greedy, are being unrealistic by charging fees he regards as “exceptionally high”.

MAKING MONEY
And for the issue of a funds’ past performance during periods of crisis? Take the taper tantrum: the kinds of fund Martin would recommend lost no more than 1% during the tantrum period. In such a period, their risk mitigants ought to have prevented greater losses. “Those funds we like, did what they said on the tin,” he says.

Of course, some funds did perform well during the taper tantrum. The Pioneer Absolute Return Bond fund actually made money during the period. Tanguy le Saout, head of European fixed income, explains that the fund had no credit exposure at the time and was short duration on US bonds. Its positioning meant that while many of its peers in the absolute return space were losing money, it was rewarding investors with modest gains. 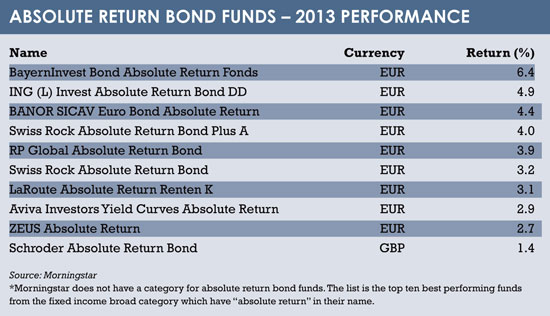 One of the reasons the fund could do this was its flexibility. By default, the fund has a duration of zero. It can move to a position of negative duration if needed, while taking bets using a variety of risk-taking positions, for instance on currency options, interest rate swaps or futures. Le Saout describes the fund as a defensive play, a treasury bill fund with alpha on top.

As such, the fund has plenty of options to make money from a bear market. However, this strategy does imply a good deal of complexity, which is not always easy to explain to investors.

“It’s easy with the consultants, who understand,” he says. “You can show the ideas and that it’s all collateralised. There’s no counterparty risk. But if you go to a pension fund trustee meeting, it can be a different story.”

And there are two sides to the coin. Although the Pioneer fund had stellar performance during the taper tantrum, it hasn’t fared so well in recent months. “We didn’t deliver too well on the absolute return bond fund this year,” he says. “We thought the US rate would be more challenging than it was.”

SUMMING UP
Le Saout’s comment underlines that it is difficult, if not impossible, to get a fund’s positioning right in all market scenarios. The cautious, risk-mitigating strategies that help protect assets in periods such as the taper tantrum will, if applied during a bond bull market, cause underperformance relative to other bond funds.

However, perhaps this is less of a problem than managers might think. It all depends on what the fund aims to achieve and what investors expect from it – whether it is capital appreciation or capital preservation.

At any rate, investors agree that fund selection in this product set is not straightforward. Grant Peterkin, senior porfolio manager at Lombard Odier Investment Managers, puts it this way:

“You’ve got to be careful with absolute return funds. The risk is they’re just an expensive beta. What you should look at is periods of heightened stress and how they perform.”