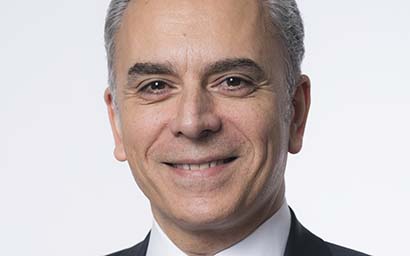 Unsurprisingly, the office is very quiet, but flexible working has paid off, he says. “We’ve got to look at this more strategically. Do we stay in location, or interact more remotely? It’s still difficult to say, but it will all be about development of a hybrid model and keeping close to our colleagues and clients.”

“We developed a number of mental health initiatives and practices over time, which I think it’s fair to say we are recognised for. We’ve held regular webinars on mental health, in French and in English, which continue to help us support our staff.”

“My appointment was about bringing my experience in capital markets to broaden SGSS beyond the core securities services,” he says, citing stock lending, derivatives, clearing and financing as examples.

As a custodian, SGSS has €4.38 trillion of assets under custody (at Q3 2020) and says it is set for double-digit growth for real asset servicing, the private equity and real estate segment.

Into the front office
A BBH survey published in December last year showed 30% of global asset managers were more likely to outsource operations compared to a year before, with firms targeting mainly data, IT and the middle office for efficiency improvements. More than half said they would look to reduce expense ratios or fees this year.

“There’s still a lot that we can do with our clients to help them improve their cost base,” says Abitbol. But as well as the middle office, he highlights outsourced dealing, which sits within or just behind the front office. Dealing is a battleground for some asset servicers at present, including French rival BNP Paribas.

“If you are an asset manager, you need to run an execution desk, so why not share and mutualise it, meaning you do not have to invest in dealing rooms, market connectivity, data and business continuity,” says Abitbol.

The firm’s most recent publicised win was to provide front-office infrastructure to a French fund manager, Sunny Asset Management.

More correctly, this was about providing front-to-back connectivity through Sunny’s business. The mandate win was an extension of Sunny’s existing custody contract with SGSS and became possible through SGSS’s partnership with SimCorp, a major provider of asset management front-office systems.

In this partnership, SimCorp’s Dimension, a portfolio management system, has been matched with SGSS’s CrossWise.

It is not an exclusive partnership. SimCorp has partnered its Dimension system with custodians BNY Mellon and State Street, for example. However, Abitbol says the SGSS partnership is unique, as CrossWise acts as a “one-stop shop”, combining Simcorp technology with the support of SGSS’s middle and back-office services.

Front-to-back connectivity and outsourced dealing are two central planks for many asset servicers as outsourcing evolves. Front-office outsourcing is not the only frontier, though.

Being highly commoditised, custodians are racing to distinguish their middle and back-office operations through technology.

In 2019, SGSS moved some of its post-trade employees to MFEX, a fund distribution platform, which now offers 80,000 funds on SGSS’s New Custody Information Platform, a European IT system.

Technology competition is like an arms race for custodians, and so it is digital transformation within fund operations that occupies the CEO’s mind the most.

“If there’s one topic I could invest my time in every day, it would be digitisation,” he says. “Digital is a real revolution and means we can deliver more services in a better way.”

He cites transfer agency (TA) – the process of record-keeping around funds transactions – as an example.

The firm has become part of several blockchain initiatives, including one with Liquidshare in France and another with FundsDLT in Luxembourg. Back in 2018, the firm carried out its first funds transaction via Iznes, a blockchain platform.

SGSS’s digital development also benefits from Societe Generale’s incubation capacities for internal and external innovation with as many as 60-start-ups. About 20 are embedded in the business.

How far will it go?
These partnerships, and many other collaborations among custodians involving large and small fintechs, show how the custody banks are dealing with the super-cycle of transformational change affecting the industry, mainly as a result of digital developments.

“Custody is still a scale business where the size of assets under custody matters,” the CEO says. “However, the key differentiating factor will be the digital disruption and the capacity to leverage data to provide new services in asset servicing.”

Recently, as part of SGSS’s strategy to support asset managers and asset owners where it has scale and growth potential, SGSS has proposed to “adjust” its UK business and retain “only commercial activities that support UK asset managers across its European operations, including Luxembourg and Ireland, where these managers are active” a spokesperson said. It is understood this will mean the closure of the UK-only funds business.

The interview with the chief executive was conducted before this organisational development.