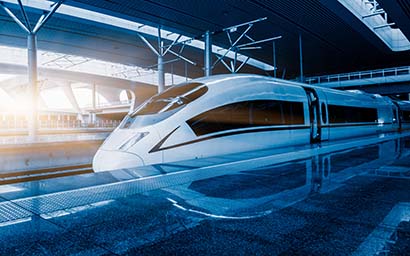 Anthony Cragg and Elaine Tse of Wells Fargo Asset Management argue that, thanks to good policy, debt and other concerns about China are much reduced, and consider the stock market’s prospects in 2018.

Overall China earnings growth accelerated to approximately 23% year over year in 2017 from flat the previous year. The macroeconomic outlook for 2018 is for mild growth deceleration as policy priorities – such as financial deleveraging, poverty reduction and environmental protection – focus more on the quality of the underlying economy over the speed of growth. Infrastructure investments will slow down, but solid domestic consumption (consumption now accounts for two-thirds of China’s GDP growth) and synchronised global recovery will provide support to the Chinese economy.

Rising inflation and global interest rates will spur policy rate hikes; however, the increases will be measured and are likely to be a fraction of the US Federal Reserve’s. A tightening bias remains to reduce systemic risks and preserve stability, but the People’s Bank of China will engage in open-market operations and lending-facility arrangements if liquidity becomes too tight.

Power consolidation under President Xi Jinping has been instrumental in the efficient implementation of the government’s agenda and previous concerns over debt levels, property bubble, currency depreciation and capital outflow have largely dissipated as a result of effective policy rollout.

We expect equity market performance to broaden out compared with the strong 2017, driven largely by high earnings growth and the re-rating of new economy sectors (for example, IT was up 92%). We project mid-teens earnings growth to drive double-digit gains for 2018.

Valuations generally are fair, with both onshore and offshore equities trading at 13.5 times forward earnings on average, but there is room for further re-rating on lowered risk, particularly for financials/real estate and state-owned enterprises (SOEs) trading at a discount to global peers. Fund flow will be positive on MSCI A-share inclusion and as global investors narrow their significant underweight exposure to a country that contributes approximately 40% of global growth.

Three reasons why
Despite our positive view of China, a stable government, expectations for 6.5% GDP growth, reform momentum and bold plans for the country to become an economic and technology powerhouse by 2035 and a “great modern socialist society” by 2050, potential investors continue to focus on risks as opposed to opportunities. 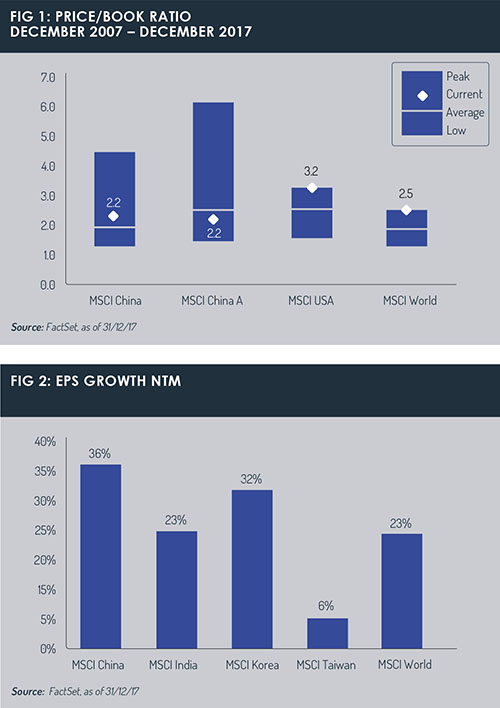 Below, we highlight three straightforward reasons why we believe an allocation to China is appropriate for investor portfolios: namely compelling valuations, premium growth and a growing share of global market capitalisation.

The valuation of the Chinese market is in line with historical averages, despite recent growth, and is attractive relative to developed markets. Fig 1 shows the MSCI China index trades 0.46 standard deviations above its ten-year average price-to-book (p/b) ratio (as of December 31, 2017) at 1.87, and domestic A-shares actually trade at a discount. Developed world stocks, on the other hand, as measured by the MSCI World Index and MSCI USA, trade at ten-year peaks.

Another factor to consider when making investment allocation decisions is the potential for future earnings-per-share (EPS) growth. Chinese company earnings are expected to outpace other emerging Asian market peers as well as developed markets, represented by the MSCI World index. Earnings expectations for MSCI China are actually the third-highest in the emerging world with only Greece (66.3%) and Peru (63.9%) expected to outpace it in 2018.

From obscurity to necessity
China was added to the MSCI Emerging Markets index in 1996. At that time, Malaysia was the largest exposure in the index at 16.6%, followed by Brazil (12.3%), South Africa (10.9%), Taiwan (9.3%) and Mexico (8.1%). As of the end of 2017, China represented 29.7% and is set to grow at least another 0.7% in 2018 with the addition of 239 large-cap A-shares at 5% of their market capitalisation in May and August. Over time, China’s weight within the index will continue to grow and is expected to surpass 40% when the remaining market cap of the aforementioned A-shares is eventually added.

China will continue to move up the value chain, not just in product but also in process (automation/artificial intelligence/robotics) and logistics and has the potential to leapfrog developed economies. SOE reform also has legs beyond supply-side reform and will further drive structurally higher returns. The annual urbanisation rate of approximately 1.2% translates to an additional 80 million to 85 million urban consumers over the next five years with new regions booming, such as the

Xiong’an New Area and the Greater Bay Area. The consumption upgrade trend is far from leveling off and we expect China’s higher-quality growth to be sustainable through 2020 and beyond.