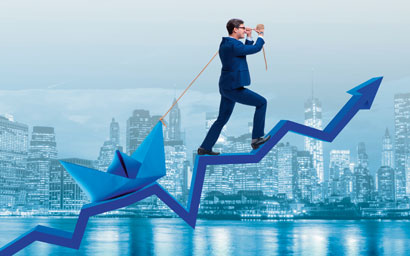 The new US president promised tax cuts, deregulation and increased infrastructure spending, but Stefanie Eschenbacher finds that multi-asset managers are becoming increasingly concerned he might overdo the economic stimulus.

Multi-asset fund managers were already largely positioned for an economic upturn in the US economy some months before Republican candidate Donald Trump was unexpectedly elected president last November.

The US economy had beaten growth expectations in recent months, wages had started to rise and unemployment had fallen almost to what is widely considered full employment.

In the immediate aftermath of the election, with investors expecting even more economic stimulus, the dollar and US equities rallied while US Treasuries declined. 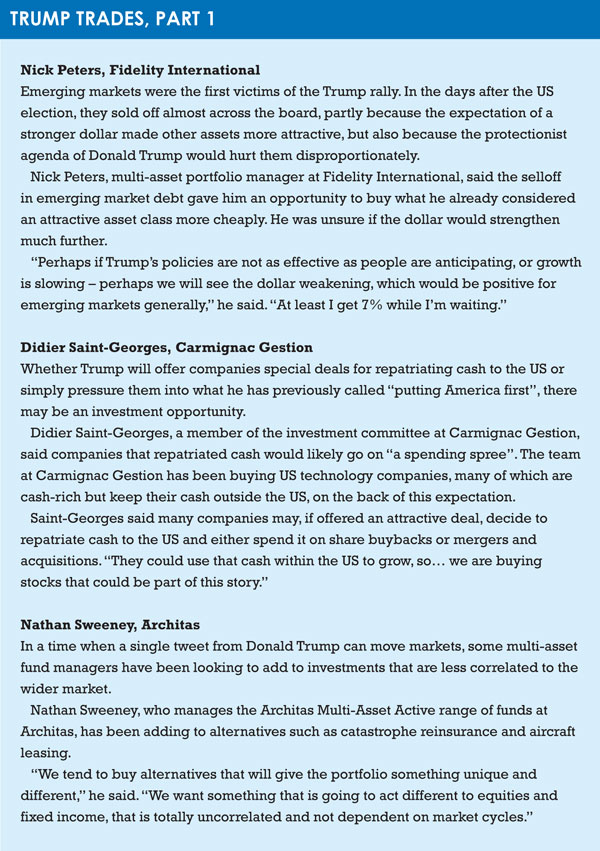 Didier Saint-Georges, a member of the investment committee at Carmignac Gestion, said what was happening in the market now had been accelerated by the election outcome, but that it had started long before. “It is not all about Trump,” he said.

The main risk now is that Trump will deliver too much of what he promised – to “make America great again” – during his 18 months or so on the campaign trail.

“Investors had been hoping and waiting for this recovery, this cyclical recovery, for quite some time,” Saint-Georges said.

“They should be careful what they wish for.”

The US economy could eventually reach a point when the credit cycle is slowing, equity valuations are suddenly considered too high while inflation is on the rise. Saint-Georges said the markets, particularly the bond markets, were not priced for a significant recovery in inflation – and therefore in rates – and if bond yields rose too quickly, it could have a jarring effect on equities.

The US Federal Reserve Bank is already on the edge. In January this year, it warned that even though the economic stimulus promised by Trump could spur the US economy in the short term, it may lead to higher inflation and debt problems in the longer term – and that it may need to counteract this.

Carmignac Gestion remains invested in US equities, but Saint-Georges said the team was becoming more and more cognisant of the limits to the economic recovery – or ‘Trumponomics’, as  he put it – seen since the election.

“Trumponomics could generate its own antidotes in the form of inflation, higher interest rates and more hawkish central banks that would trigger the end of the equity rally some time in the middle of this year,” he said.

“We are not positioned for it now, but we are getting more and more ready for it.”

Interest rates have been at or near an all-time low since the global financial crisis, which had fuelled concerns over structural problems. Those concerns were not shared by everyone, though.

LIFTED BY ENTHUSIASM
Shoqat Bunglawala, who heads the multi-asset business for Europe, the Middle East and Africa, Asia-Pacific excluding Japan at Goldman Sachs Asset Management, said the outcome of the US election and the enthusiasm of investors had simply accelerated a cyclical recovery that had already been underway.

“The market had underpriced the level of growth that we have experienced,” he added. “It was overly pessimistic.”

He said his team had started repositioning the portfolio to capture an economic recovery in Europe, which he said was typically behind the US economic cycle. 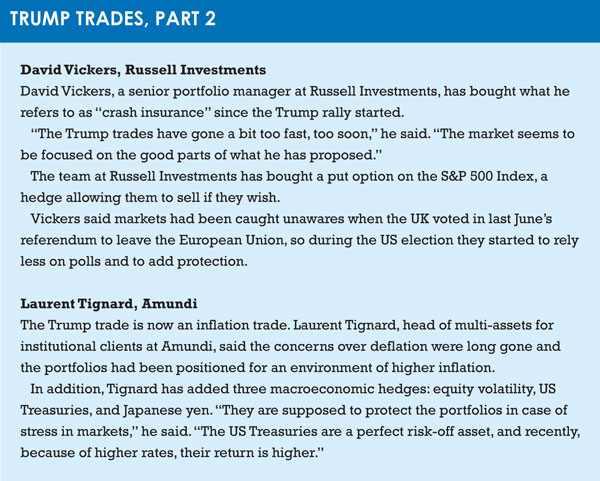 “We have peak margins in the US and we think these peak margins have been driven by low interest rates and low wages, both of which are turning a corner,” he said.

“Wage inflation is already coming through and interest rates are clearly on the rise… there is going to be margin pressure, which is going to lead to earnings pressure.”

Vickers said he now spends more time thinking about the downside risk in the US economy, increasingly convinced there is little room for US equities to rally further.

“Every day I wake up and hope that every other person in the equity market believes that equity markets are still appropriately valued today. That can change quickly in an uncertain environment.”

There are multi-asset managers who believe the US equity market has still further to go. Nathan Sweeney, who manages the Architas Multi-Asset Active range of funds at Architas, said the US was actually in a mid-market slowdown but on the cusp of breaking out.

He said companies had been all about cutting costs and avoiding risks since the global financial crisis, but the question was whether the new wave of populism would change that.