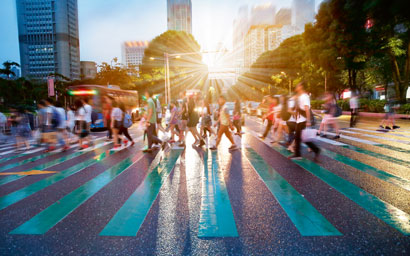 Much of what’s happened in China’s economy is not as eventful as you might think, says Andy Rothman of Matthews Asia.

At the start of 2016, many were predicting an exciting year of crisis for China. Pundits had proclaimed that by year-end, capital flight would leave China without enough foreign exchange reserves. That was supposed to have resulted, by now, in a 25%-30% devaluation of the Chinese currency. A banking crisis was sure to follow, many said.

It was, however, a relatively boring year in China. Foreign exchange reserves declined by 9.6% to $3 trillion (€2.8 trillion), far more than necessary (and a bit less than the 13.3% decline in 2015). The renminbi fell by only 6% against the US dollar, roughly the same level of devaluation as it saw during 2015. For both years, renminbi weakness was driven by dollar strength, rather than by underlying weakness in the Chinese economy. In fact, about one-third of the full year devaluation in 2016 came in just the last 53 days of the year, as the dollar surged after election day.

REBALANCING CONTINUES
The structural rebalancing of the Chinese economy continued down its uneventful path last year, the fifth consecutive year in which the services and consumption (tertiary) part of the economy was bigger than the industrial (secondary) part, according to data published on January 19, 2017 (see Fig 1). 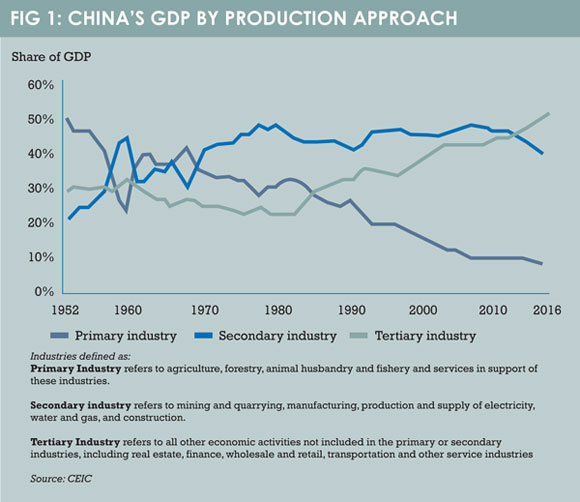 My expectations for 2017 are also generally positive: rebalancing will continue, and although the growth rates of retail sales and income are likely to continue their gradual deceleration, I believe China will remain the world’s best consumer story. A new study by Oxford Economics forecasts that the number of Chinese middle-class consumers will exceed the entire population of the US by 2026. (This is why 87% of the Chinese equities we hold, across all strategies, are in consumer and services sector companies.)

A TWO-TRACK ECONOMY
For a little excitement, we can turn to the weakest parts of the economy, the sectors connected to heavy industry and construction. The growth rates of coal, cement and steel production have been anaemic over the past few years. But, over the past four years, average annual growth rates of more than 35% for sales of online  good  and SUVs – as well as more than 50% growth in express package deliveries and Chinese tourist arrivals in Japan – demonstrate the strength of the largest part of the economy: services and consumption.

In my view, the data I’ve just discussed is far more important than China’s GDP growth rate. After all, how much weight do investors place on GDP growth rates in other countries? 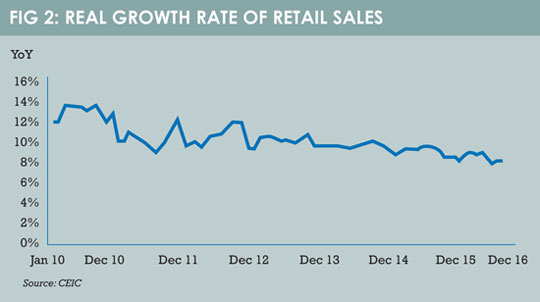 Some media reports will describe last year’s GDP growth of “only” 6.7% as the slowest pace in 40 years. True, but it was still growth of 6.7%! The GDP growth rate has been decelerating gradually for many years, and is likely to continue on that path for many more years.

And, let’s remember the base effect. The size of the incremental expansion of the Chinese economy last year, when growth was 6.7%, was roughly the same as the addition to the economy five years earlier, when GDP growth was 9.5% (in local currency terms, at constant 2010 prices). In other words, the opportunity for selling goods and services to the Chinese at the slower growth rate last year was just as big as the opportunity five years earlier, at the much faster GDP growth rate.

THIS YEAR SHOULDN'T BE AS BORING
Overall, the Chinese domestic economy should be healthy and fairly stable this year. But 2017 will be far more exciting than last year, especially in the coming months.

By the summer, however, I expect most investors will realise that China will still have more than enough reserves; that Trump’s steps will have little concrete impact on the Chinese economy; and that even if new home sales fall 10%, that would make 2017 the second-best year in the brief history of China’s commercial housing market, with sales of more than 11 million homes. Those stories won’t seem so scary by mid-year.

Also, by the summer, I expect sentiment should improve as it becomes clear China’s transition from a high-speed, heavy industry-based economy to a moderately fast consumer and services-based economy is well underway. The challenges of completing this transition will result in gradually slower growth and increased volatility, but the risks of a hard landing are very low.

China is again likely to account for about  a third of global economic growth, higher than the US, Europe and Japan combined. Investors, however, will have to be patient during a turbulent first half of the year.

Finally, I want to mention the wildcard possibility of President Trump blowing up America’s longstanding ‘One China’ policy. Recently, he said “Everything is under negotiation, including One China.” That would be a very dangerous outcome, but I believe that the CEOs and retired generals who advise Trump are likely to dissuade him from taking that step.