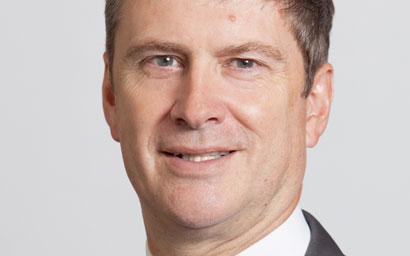 Mark Weeks, head of ETF Securities, reflects on Brexit’s trampling of the FTSE and tells Nick Fitzpatrick he hopes to see stock and bond inflows top commodities for the first time this year.

The chief executive of ETF Securities, Mark Weeks, could not believe it when the FTSE 100 plummeted in the aftermath of the Brexit vote in June last year.

“The massive decline in the FTSE post-Brexit was shocking to me. Some stocks falling 30% was incredible because Britain’s intended exit from the EU [meant] little immediately had changed for those firms,” he says.

He’s got a theory about the FTSE’s battering. Regulation meant there were fewer proprietary traders to support the index’s decline. Prop traders would have in the past bought up falling shares and supported the market.

“What has happened in the years since the Lehman Brothers collapse is that new regulation has taken away the attractiveness of prop trading for investment banks. Their ability to act as a shock absorber in such situations is thus severely reduced.”

Weeks is a former Goldman Sachs worker and his background is rooted in securities finance sales and trading.

Inevitably, as CEO since 2013 of an ETF business, the performance of indices like the FTSE is of interest.

ETF Securities was founded in 2003 and launched the first gold exchange-traded product the same year. Weeks joined in 2009.

The firm is described by one expert as a “gold shop, but it doesn’t want to be seen that way” and Weeks has been diversifying the business with products linked to stock and fixed income indices.

“[ETF Securities] has been focused on diversifying our revenue streams, although we are very clearly a specialist and haven’t lost sight of our commodities heritage. We need to continue to broaden our revenue streams so that we are not susceptible to commodity downturns,” says Weeks.

The firm now has $21 billion (€19.7 billion) of assets under management – $18 billion of that represents Europe, while the remainder is Australia and the US. Deutsche Bank figures show about €629 million of inflows went into the firm’s ETFs last year, compared to €380 million the year before. Its larger exchange-traded products (ETP) business saw €4.03 billion of inflows last year.

Certainly the firm now has products for bulls and bears in the kind of volatile environments investors are increasingly told to expect. As well as gold and silver products, in 2014 the firm launched triple-leveraged short and long FTSE ETFs, for example, and it has a fundamentally weighted fixed income offering. More products in commodities, equities and bonds will come this year, Weeks says.

However, he also thinks ETFs linked to major indices is a crowded area and hard to compete in without having huge assets from which to harvest low management fees. “We cannot compete in that space. There are 60 Eurostoxx products. Why launch another one?”

Weeks hopes that this year, for the first time, greater inflows into non-commodity products will be realised, thanks to specialist equity ETFs, most notably hi-tech robotic and cyber equities, which are offered in partnership with other fund management firms. ETF Securities is also notable for its Canvas platform, which gives other fund managers an ETF construction box.

TRAVELLING BRITAIN
With four of the top-five fund promoters in Europe now having large ETF businesses, fund data provider Lipper suggested this month that a structural change is taking place in asset management.

ETF assets in Europe climbed for the fifth consecutive year in 2016, and are comfortably over €500 billion.

Concurrently with the nearly €40 billion of net European sales last year, a small ETF industry group was travelling up and down Britain to persuade independent financial advisers (IFAs) to get onboard with ETFs.

ETF Securities, one of the top-ten largest ETP providers in Europe, is a member of this ETF Forum, along with WisdomTree and BMO Global Asset Management.

Weeks says the “non-partisan” push reached 200 IFAs across 18 cities. The result was that two-thirds of the advisers indicated they’d be taking up usage of ETFs over the next year.

In theory, the advisers should not have needed encouraging to buy ETFs, not since the UK’s retail distribution review (RDR) came into force. The RDR levelled the playing field between active funds and ETFs by removing a commission-led bias for IFAs to sell active funds.

“When the RDR came in [2013], there was expected to be a huge surge in ETF volumes from IFAs – but it didn’t happen,” says Weeks.

There is significant need for ETF education for advisers to be comfortable with this kind of product, he says, but the push by the ETF Forum was working. Nearly 70% of the IFAs said their knowledge was now higher.

It was part of Weeks’ remit to extend ETF Securities’ footprint in Europe when he became head of sales in 2010, a year after joining the firm. He became CEO in 2013 after the firm’s founder, Graham Tuckwell, devolved that role. Tuckwell continues as chairman.

In Europe, along with every other asset manager, the firm faces MiFID II, the updated Markets in Financial Instruments Directive. On the one hand, MiFID II should be a boon for ETFs, given its aim of bringing greater price transparency to funds.

But MiFID II’s appropriateness tests will also provide a distribution hurdle for providers, like ETF Securities, that have some products considered ‘complex’.

Many of ETF Securities’ products are backed by physical securities rather than derivatives and are not complex, but commodity products are by necessity backed by swaps and it is these that will be classed as complex under MiFID II. This means appropriateness tests will have to be carried out for retail customers.

Weeks is encouraged, however, by the market response to this. “We’re getting more requests from platforms to tailor appropriateness tests because they want to make sure they are asking the right questions.”

It may have taken longer than some expected for ETFs to take off in Europe and start to display the same level of popularity found in the US, but ETF Securities is a beneficiary of the increasing popularity now that it’s here.

Figures from ETF consultancy ETFGI showed that ETF Securities saw the second-largest yearly inflows for ETFs/ETPs for the year-to-date at the end of November last year, with $5.22 billion. BlackRock figures showed ETF Securities was the third-best seller for the year.

The ETF trajectory looks set to continue. No doubt more IFAs will learn more about ETFs this year. But perhaps the best lesson they could learn from Weeks is that fewer prop traders will lead to steeper falls when investors push the panic button.