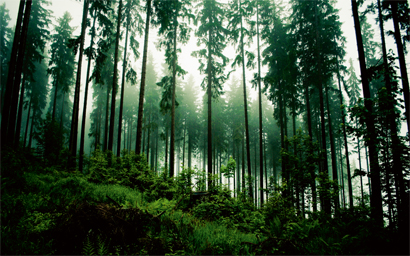 Drivers for investing in forests cover a vast range, from a recovering US housing market to wood’s use in nanotech. Fiona Rintoul reports on an eco-friendly asset class with alternative-investment benefits.

When it comes to investing in forests, or ‘timberland’, some of the advantages are obvious. You won’t find anyone who dislikes trees. Trees are nice. And trees are tangible – the diametric opposite of the sterile ‘derivative future’.

“You can see the growth,” says Maurice Ryan, timber marketing manager at Green Belt, an Irish forestry management company. “One thing forestry has over every other asset class is biological growth.”

Not only does timber grow in a reliable and visually accessible way, statistics suggest it is less volatile than other investments.

As the chart on page 14 shows, it did not enjoy the exuberant highs of, say, global emerging market equities in 2007, but neither did it plunge into a trough in 2008; it just kept on chugging.

“In a diversified portfolio, timber provides a hedge against inflation and has a low correlation with other asset classes,” says Nils von Schmidt, fund manager for timber at Aquila Capital, an alternative investment firm that manages two retail and two institutional timber funds. He cautions, however, that this holds true only “if you invest in forests and exclude processing”.

Aquila Capital’s funds can invest 10%-30% in processing facilities if needed. Other funds may invest more. However, some retail funds such as the Pictet Timber fund, a sub-fund of a Sicav domiciled in Luxembourg, may not invest directly in timber at all, but in the shares of timber management companies. “Our fund is basically an equity fund,” says Gabriel Micheli, co-manager of Pictet Timber. “If there is volatility on the equity market, then we will have volatility from that.”

Therefore, some of the advantages of diversification are lost – although Bob Flynn, a director at Risi, which provides information about forest products, suggests all timberland has tended to be more correlated with other investments over the past four or five years.

Against that, the equity-based fund gains in liquidity by investing in timberland company stocks. This helps to explain why Pictet Timber has many retail clients. The fund also provides a way in for retail investors who want exposure to timber but don’t have enough money to invest directly.

And, says Micheli, there are good deals to be had on the listed market. “We are able to buy high-quality timberland – often better than private equity investors.”

Typically, however, timber is a long-term investment. “You need at least ten years to make a forestry investment really worthwhile,” says von Schmidt. “It’s treated as an alternative investment and has some similar characteristics to certain real estate or infrastructure investments.”

As such, timber may be ideal for institutional investors, particularly pension funds, which, according to Flynn, might invest about 1%-2% of their portfolio in trees. Certainly, a timberland investment management organisation, or ‘timo’, is a common way into this asset class for pension funds. Few retail investors can stomach such longevity.

“When pension funds invest through timos, either in pooled accounts or single accounts, the forest is typically acquired for a fixed period (eight to 15 years), and then the investments sold out after that period,” says Flynn. “Currently, some timos are trying to develop more ‘evergreen’ funds, but the secondary market is still in the early stages of development.”

GROWING ALL THE TIME
Assuming investors can metabolise the long time horizon and the illiquid nature of timber investments, what are the advantages of investing in this asset class?

The discussion quickly comes back to biological growth. “Because timber is growing all the time, it can ride out the low points and wait for the high points,” says Ryan at Green Belt.

If you have the right kind of forest, you can also spread your risks. Aquila Capital is trying to do this with 3,100 hectares of forest it has acquired at three locations in Scotland. “We are amalgamating three forests to create a model forest,” says von Schmidt. “An ideal forest has a young forest with vibrant growth that will appreciate in value and cash flow from harvesting mature trees.”

Scale is important, as is having a balance of different trees. Conifers are the most heavily traded species, so will typically make up a large proportion of a forestry portfolio – Aquila Capital’s is 70% conifers – but, as with any investment, it doesn’t do to put all your pine cones in one basket.

Conifers and deciduous trees have different end products, and a mix is desirable. Wood from deciduous tress is typically used in furniture. There is an element of fashion here, and von Schmidt suggests that a trip around a kitchen showroom can be an instructive exercise for a timber investor. But a mix of trees is also an end in itself.

“Foresters like diversity, and it’s good for sustainability,” he says.

Even if some wood products are subject to fashion and can be cyclical, overall forestry tends to be a stable investment. In any case, an array of factors means that right now is a good time for timber. For a start, timber is being used in ever more ways. Last year’s COP21 UN climate change conference in Paris has helped to promote the benefits of biomass fuel.

“In Ireland, a lot of power stations are being forced to reduce their use of fossil fuels by 30%, and in the UK there are renewable heat incentives,” says Ryan.

“Seven per cent of clothes are made from wood, and that will probably increase,” says Micheli.  “New engineered wood products are being used more and more in building, and, in the future, nano-materials will be made from wood.”

Demand from the USA and Asia in particular is high at the moment, largely because of construction projects. “The US housing market, the largest user of wood anywhere in the world, is in a phase of recovery, but it is still well below normal levels and should increase in the coming years,” says Micheli. “Countries such as China and India don’t have much forest and need to build as they urbanise.”

Exploiting these opportunities requires guile, however, as timber doesn’t travel well. Timber is sold very locally, says von Schimdt, and in most areas, it doesn’t make sense to transport timber more than 100km. 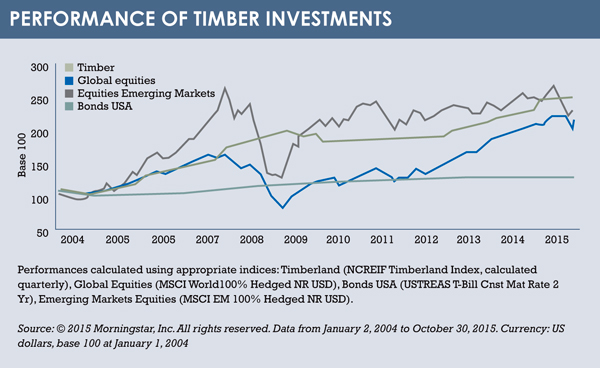 Of course, investors can go where the demand is, but that requires both local knowledge and the ability to introduce new ways of thinking to external markets. Von Schmidt cites the example of central and eastern Europe, where the forests are just like western Europe’s. However, the post-communist restitution process can create ownership issues and the management of the forests is often different.

“Typically, 50 years of communism have drastically changed the thinking of the people,” says von Schmidt.

For him, management is the main risk in timber investments, even if it is not the risk potential investors ask about. Typically, investors are concerned about biological risks, such as fire and disease, he says – but while these are real risks, the right management will bring them under control.

“The best forest is useless if you don’t have proper management,” he says.

COMMON PITFALLS
At the same time, market practices vary and you can’t expect to find the same standards in developing markets that you might find in Germany. Proper due diligence and spending time in a jurisdiction are the keys to avoiding getting stung, as Harvard University was in Romania when an agent it hired in connection with its forestry investments was convicted of bribery.

“A lot of countries in South America are worth looking at, but you want to look very carefully at the provenance of the title and how clean it is,” says Ryan.

The most common pitfall, according to Flynn, is investors not understanding the vastly different land tenure issues in Africa and other developing countries, compared with the secure land ownership typically found in North America and western Europe.

Of course, a higher risk offers the possibility of a higher return. One of the beauties of forestry, says von Schmidt, is that anything is possible.

“The world is huge, and there are so many opportunities. If you look at a graph showing the risk/return profile of all the countries in the world where you could invest in forestry, there is everything from high risk/high return to traditional low-risk investments, such as our forest in Scotland.”

Again, it’s a question of balance. A high risk/return profile may be fine, but every rational investor wants to avoid forestry investments that aren’t sustainable. For one thing, regulations are tightening around the world. For another, not only does playing fast and loose with trees feel wrong on all kinds of practical levels, it is intellectually repugnant.

“The whole concept of sustainability was developed by foresters, starting with Hans Carl von Carlowitz in 1713,” von Schmidt says. “That’s why European forestry has developed in terms of these criteria.”