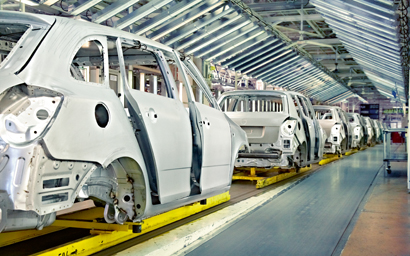 A fund launch can be fragmented and potentially expensive, but processing specialists have sought to bring costs down and take market share from law firms in recent years. Nick Fitzpatrick reports.

A cross-border fund launch begins with a new investment idea – even if it’s another firm’s new idea. That’s the easy bit.

Next comes thrashing out the investment strategy, which probably involves complex derivatives, while simultaneously deciding an appropriate legal structure and regulation for the new fund (will it be Ucits or an alternative fund?). Finally, a few encouraging remarks from a consultant about the fund’s viability would be nice.

If you market yourself as a low-cost manager, your decision on whether to build an umbrella structure from scratch, or just launch a sub-fund, will have a major effect on cost. You can expect to pay €150,000 to set up an Oeic umbrella, whereas a sub-fund might be €10,000.

If you’re a manager that wants to get to market before the latest investment fad expires, speed takes on even more urgency. Three to four months, culminating in regulatory approval for a new fund launch, might be a reasonable benchmark for a Dublin or Luxembourg Ucits – though the rising regulatory workload might cause pressure at the approval stage.

Ultimately, a slot with an administrator is needed. This is not always easy, and if you miss a slot, your fund is failing to make fee revenue.

OUT WITH THE LAWYERS... ALMOST

The Ucits IV regime in place since 2009 has sought to streamline the fund launch process. It ended the requirement for local legal counsel to submit fund applications to regulators, allowing other actors to offer the service more cheaply. However, for fund firms – unless they are able to carry out launch processes in-house – external actors are still needed for tasks such as drafting, translating and filing documents for regulatory approval. These actors still include lawyers – typically for drafting prospectuses, and also local firms for registrations of approved funds in local markets.

The Big Four business services firms (EY, Deloitte, KPMG and PwC), are also big actors, especially when it comes to leveraging their global reach to ‘passport’ Ucits funds into Asian markets. Finally, there are multiple regulators whose authorisation is needed for cross-border marketing.

In recent years, a crop of service providers with a niche role in fund launch processes has sprung up. They include Fundsquare in Luxembourg, which describes itself as a “utility” that reduces launch costs through efficiencies, and Global Funds Registration (GFR), based in London.

These and other firms, such as Kneip in Luxembourg, deal with at least some aspects of the fund launch process and, in addition, often provide ongoing services for a fund in its life-cycle. In doing so, they are competing with legal and business services firms.

It might be an exaggeration to call them fintech ‘disruptors’, but they have sought to reduce the need for expensive lawyers, and to replace manual processes and faxes with intuitive dashboards and workflow process systems.

Liontrust, a UK-listed fund manager, has been expanding its fund range into the cross-border European market. Its principle centre for cross-border administration is Dublin, though it also has a distribution branch office in Luxembourg.

With £4.6 billion (€6 billion) of assets under management and net inflows last year of £163 million, Liontrust is substantial enough to have an in-house team for much of its documentation, but it also uses GFR for registering funds across Europe.

“Our recent experience of launching our global strategic equity fund [Liontrust GF Global Strategic Equity] in the summer, and a global water and agriculture fund in January, shows that the process of putting a Ucits fund together is very straightforward.

“The documentation is not that complex. If you have an exisiting Oeic, there is already a structure and a prospectus, so you just have to create a supplementary prospectus,” he says.

Then it’s largely a matter of getting regulatory approval, which might traditionally take two to three weeks.

FRICTION IN THE CHAIN
That said, anecdotal evidence suggests that over the past year, the regulatory approval process has created friction in the fund launch chain.

“Funds that should sail through in a matter of weeks are taking double the time to get regulatory approval,” says Abrol. “Where we have launched a fund that is very similar to an earlier fund, we find even the language the regulator agreed on as recently as the summer will be questioned just a matter of months later.”

He puts this down partly to derivatives. “The level of disclosure around financial derivatives is three to four times what is was for a fund approved a few years ago – but this is quite right, given the complexity of these instruments.”

Similarly, Mario Mantrisi, senior adviser at Kneip in Luxembourg, says: “What I hear from the market is sometimes the approval process from the CSSF [the Luxembourg regulator] takes longer, but they have their job to do and a responsibility to make checks.” 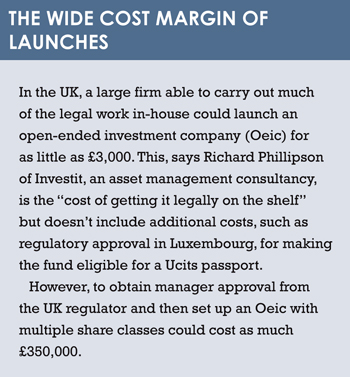 Although Abrol at Liontrust describes the approval process as somewhat complex, he says communication between service firms and regulators in both Ireland and Luxembourg serve to create efficiencies.

MULTIPLE PARTIES
Donnacha O’Connor, a financial services partner at law firm Dillon Eustace in Dublin, says of the fund launch process: “It’s as efficient as I imagine it could be, given that multiple parties have to come together.”

A Ucits fund might take three to four months to launch, with the regulatory approval process perhaps taking up six to eight weeks of that. It will include questions and feedback from the regulator. As they are aimed at professional investors, hedge funds are quicker to launch, between one and two months, says O’Connor. Hedge fund directors can be pre-approved online in two weeks.

The CBI has introduced the online Orion system for applications to set up as a Qualified Investor Alternative Investment Fund, or QIAIF, which can be approved within 24 hours. A CBI spokesman says the regulator intends to extend Orion to cover other fund applications, including Ucits.

Providing a kind of digital ‘pipe’ like Orion for documentation and approvals is what firms like Kneip and Fundsquare in Luxembourg are largely about.

Fundsquare’s head of product management and marketing, Paolo Brignardello, says: “Technology is not traditionally very strong in the launch process and the stakeholders are many. Managing the actors around the value chain, that’s where Fundsquare tries to play.”

Funds can still use their lawyers to file directly with the CSSF for regulatory approval, but Brignardello says that circumventing Fundsquare may render the process less secure. “Email is a competitor,” he says.

Fundsquare, along with Kneip in partnership with CetrelSecurities,  are the only two CSSF-authorised filing channels.  Filing covers a range of necessary papers, from prospectuses to ‘key investor information documents’, known as KIIDs.

A difference between the two firms is that Fundsquare does not produce these documents (a fund’s lawyers might do that), but brings together various actors to channel them. Kneip produces them as well.

Both providers are also involved in ongoing fund reporting once a fund is live. So too is London-based GFR. Martin Neason, a GFR director, says: “Ucits IV has made [fund launches] cheaper, but it has also allowed companies like us to introduce our own in-house technologies and distribute them, whereas under Ucits III, there wasn’t any benefit in a company considering developing this service because firms had to deal with a disparate number of lawyers across Europe.”

It is in both Luxembourg’s and Ireland’s interest to make the cross-border fund launch process as efficient as possible. Lawyers will remain important to the process. A prospectus can hardly be produced without one. But the reduced reliance on lawyers is one of the successes of Ucits IV.

Noel Fessey, managing director at Schroders in Luxembourg, says: “The result [of Ucits IV] is that we no longer use host-country lawyers to file market access notifications and we have a faster and cheaper service for our funds, at least within Europe.” Schroders uses Kneip for this, he says.

“International fund registration is still subject to local law firm intermediation, but there are many services offered in the market to make that easier – the Big Four all have something, and all seek to use technology to lower the cost of production.”