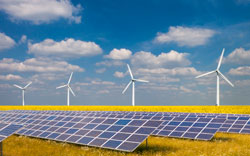 Renewable energy producers are finding regulatory support globally, and accessing the sector is possible through numerous avenues. But how altruistic are investors themselves? Fiona Rintoul reports.

There’s more to investing in renewable energy than just sitting at a desk, looking at a screen. “I can show you my muddy boots,” says Oldrik Verloop, co-head of hydro investments at Aquila Capital.

The firm invests in the renewables sector through renewable infrastructure in the solar, wind and hydro power sectors. The key word here is ‘infrastructure’. Aquila Capital’s real assets division often takes a large stake in projects – sometimes 100% – and is very much involved operationally.

However, as the sector and the companies within it have developed, it has also become possible to invest in more conventional ways – with less of a need for muddy boots.

Ian Woods, head of ESG (environmental, social, governance) research at AMP Capital, notes that there is increasing choice available to both proponents and investors – from traditional listed equity funds and direct infrastructure funds, to ‘green’ bonds for more established clean energy technologies, through to venture capital funds for emerging companies and technologies. “From the proponent perspective, the best vehicle depends on, among other things, the state of the technology,” he says.

Vontobel Asset Management’s New Power fund is an example of a traditional listed equity fund. Many of the stocks that fund manager Pascal Dudle invests in are found in generalist funds, though there are also a number of pure plays. “In the end, it’s all about finding the right stocks at attractive valuations,” says Dudle.

The main difference, says Thomas Guennegues, senior equity analyst for the renewables sector at Robeco, is the volatility of the stocks and the often small-cap character of investments.

“It’s important for fund managers to be dynamic,” he says. “It’s a fast-moving sector that can turn in days. It’s more difficult to look at 100 clean energy stocks than 100 European equity stocks, because they are less covered by the sell side and there is more movement.”

Understanding the risks is important, as in any sector.

“Some risks are reasonably straightforward to quantify, such as the probability of debt default, but many risks are hidden, at least to the superficial investor,” says Andy Gardner, fundamental equities portfolio manager at AMP Capital. “These typically include valuing externalities and regulation.”

REGULATORY SUPPORT
Regulation – on which so much in the clean tech sector has traditionally depended – is beginning to look more stable.

“Regulations support the whole theme,” says Guennegues. “There’s a very clear trend and very little probability that it will reverse.” That is as true in China as it is in Europe. “The world is changing to a cleaner environment,” he adds. “There are now nine cities in China that have emissions trading schemes. We see a strong will from the state to reduce the share of coal generation.”

But there are other, more subtle risks. AMP Capital’s Gardner notes that clean energy is incredibly disruptive to the status quo. This is because costs always go down in the technology sector, whereas in extractive industries, which produce fossil fuels, costs almost always rise in nominal terms over the long term, remaining flat in real terms.

“Renewable and fossil fuel costs per unit of energy are now roughly comparable in many locations across the world but are heading in opposite directions,” he says. “One key difference in the research process with any emergent industry is the lack of history, so we must look to similar disruptions in the past for precedent.”

At the same time, renewable energy is prey to macroeconomic developments like any other sector. At the time of writing, Guennegues says the solar sector is affected by the plunging oil price. That doesn’t necessarily make a lot of sense as the only link from oil to renewables is through transportation. “The portfolio manager must be able to interpret the signals,” he adds.

This obviously applies less to infrastructure funds, where the investment timescale is usually 10-20 years or more. There, it is more a question of matching investors to projects.

GOOD INTENTIONS?
The main motivation for renewable energy investment is returns. A survey by Aquila Capital of 64 institutional investors, asking about their attitudes to renewable infrastructure, showed that 73% consider economic viability to be a key driver of investment in renewable infrastructure, with 41% citing increased desire for socially and environmentally responsible investment. When it came to criteria for infrastructure allocation, 63% said their strategy was based on portfolio returns, with just 6% citing environmental and ethical impact.

Evidence suggests that, broadly speaking, this is common to investors in other renewable energy fund vehicles.

Dudle says: “Sometimes investors comment that they are mainly looking for performance, but it isn’t negative for them if they do something good for the next generations.”

These findings may not light up the lives of environmentalists, but it could be that the renewable energy industry is at a point where it no longer needs people to want to do good. Instead, they can do what makes sense financially and do good anyway.

Take energy efficiency, which is one of the most promising areas in the short to medium term. According to Gardner, every dollar spent on efficiency means $2-4 in lifetime cost savings, and two-thirds of the economic potential to improve energy efficiency remains untapped. If people do the financially sensible thing and use energy more efficiently, they could end up doing a lot of good.

“Historical energy savings from efficiency have exceeded the output from any other single fuel source, and if the trend continues at its current pace, efficiency gains could halve the energy needed to power the world by 2035,” says Gardner.

In terms of energy sources, Gardner believes that of all the mainstream renewables, solar photovoltaic has the most potential. “Even Shell and BP project solar will dominate the global energy mix by the middle to end of the century,” he says.

As technologies mature, the renewable energy sector is coming of age. Crucially, renewable energy is increasingly viable without government regulation and will be driven by market forces. “This is not charitable work,” says Verloop. “This makes sense from an investment perspective.”