Would you like to hire an active fund manager but pay them a passive-like fee if they underperform? Wyoming's pension fund has done just this and says other plans could do too, if they 'dig their heels in'. Nick Fitzpatrick reports from New York.

Wyoming’s mountainous landscape at the foothills of the Eastern Rocky Mountains reflects the stock market’s peaks and troughs. State capital Cheyenne, known as “the Frontier City”, is the base of the Wyoming Pension System (WPS), an institution that is keeping Cheyenne’s reputation alive.

WPS has overhauled its investment approach with consequences for active asset managers.

In the past year, under John Johnson, chief investment officer, the pension plan has been paying its active managers fees that start at a level more like passive.

If the long-only active managers to the $6.5 billion (€4.8 billion) pension plan outperform an agreed benchmark, then outperformance in dollar terms is split 80/20 in favour of the fund.

“If at the end of the year the manager’s performance-fee bank is negative, they would only receive the base fee and no performance fee,” says Johnson.

ALARMING LEVELS
It may sound tough, but when US public pension plans like Calpers are lowering their return assumptions and underfunding in some public schemes is reaching alarming levels, pension boards in the US know they need to toughen up.

Yet the new fee structure has a benefit for investment managers too, because WPS may show more patience with underperformance.

“When a manager is not performing well, it gives us more patience with them because at the same time we know we are getting a return stream from the asset class cheaply,” says Johnson.

He says the fee structure “pushes the return risk onto active managers” and effectively creates a high watermark.

The idea came to him in a brainstorming session with other pension plans.

Johnson joined WPS in 2009 and became CIO last year. He was part of a series of hires under the pension board’s executive director, Thom Williams, who wanted to create an internal investment team.

It was in 2009 when, Johnson says, there was a realisation that Wyoming needed to recast its whole portfolio. WPS pointed itself towards more passive investment management.

ILL WIND
Surely an ill wind blows from Wyoming across the US asset management industry. In any case, asset managers are able to feel which way things are going.

In New York, Russell Investments and AllianceBernstein both report strong interest in passive from clients and prospects – and, in particular, interest in newer forms of passive investment variously referred to as smart or enhanced beta.

In fact, AllianceBernstein is a passive and active provider to WPS.

Lynn Blake, chief investment officer global equity beta solutions, at Boston-based State Street Global Advisors, says that though passive has been a core strategy for many pension plans since the 1990s, it is becoming more mainstream now and penetrating the defined contribution (DC) individual pension market.

“It is moving outside institutional and into retail DC, touching every investor in the market,” says Blake.

It is a similar story in San Francisco, where Mellon Capital Management saw its equity indexing business double since 2008 and grow last year by 23% to $198.6 billion. Karen Wong, managing director equity index strategies, says the increase was due more to inflows than market appreciation.

“People were really looking at their active and passive allocations and some began to realise they were paying active fees for factor exposures, like value or volatility.”

In other words, a carefully constructed index that is tilted towards these factors could get investors the same return for a smaller fee.

The idea may not be a new one given that index providers can wield academic research going back years to support their point. But if WPS is anything to go by, there is a discernable trend for pension plans to look at smart beta.

At the end of 2011, Wyoming announced it was employing smart beta indices as it moved towards a larger passive allocation.

“It’s not alpha. Alpha is where an investment manager adds value. Risk premia, you could say, is between alpha and beta.” 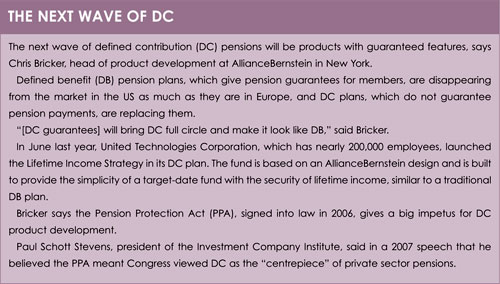 Saying that around 30 global institutional investors have adopted an MSCI risk premia index, Bender also claims “it’s a huge opportunity for investors to get better returns and lower costs”.

So far, Johnson says, the approach has been an “all-round success”, though he acknowledges one year is a short space of time. He says the pension plan has lowered its volatility and that returns are “commensurately higher than the typical index return”.

And what about fee reduction, a major aim for WPS since 2009?

“We have gone from paying 40 to 50 basis points in base fees, to below 15 basis points on a blended basis,” says Johnson.

If an ill wind does blow for active managers from Wyoming, it may blow further than New York and San Francisco.

“The factor tilt and the fee structure can be implemented across any plan in the world,” says Johnson.

“If plans dig their heels in for a better fee structure, they’ll get what they want. The market is changing rapidly for long-only active managers.”