Share prices for all ten of the biggest asset managers in Europe have fallen in the past year. George Mitton looks at how these supertankers might steady themselves in the years ahead.

These are hard times for asset managers of all kinds, and the largest ones have the most to lose. As the eurozone crisis bubbles on, worries about bank solvency and risk aversion have blighted the industry.

Funds Europe looked at the ten largest managers by assets held in European funds and examined their finances in the second quarter compared with the corresponding period of 2011.

With a few exceptions, assets under management have declined due to negative market movements and outflows from risky products such as equities. Profits at most firms have also fallen. But the most startling indicator is that every firm in our list has seen its share price or the share price of its parent company decline in the year ending 30 June 2012, some by alarming degrees.

The question arises: Do these giant firms have the strength and stability to survive this difficult time? Or are they lumbering Leviathans, too unwieldy to adapt to the new pressures?

Not even the world’s largest asset manager, BlackRock, has avoided the pain of the straitened circumstances. Assets under management were down 3% in the second quarter, compared with the same period in 2011, and net income was down 10%. The share price at the end of June was down 8%, compared with the previous year. 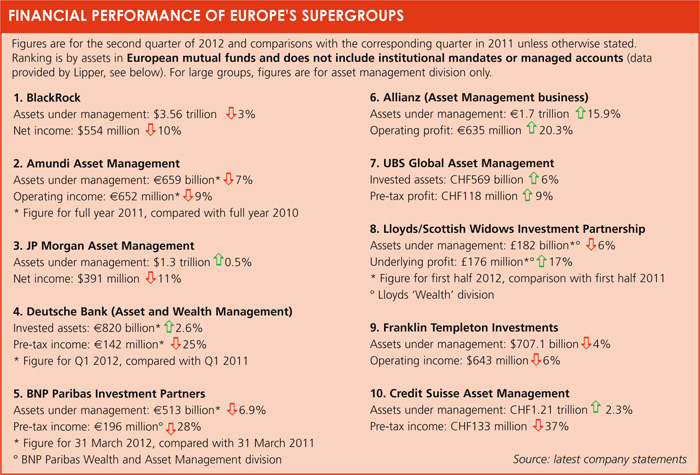 The environment is “very tough”, says James Charrington, chairman of Europe, Middle East and Africa at BlackRock. But he insists the firm has had inflows in many areas, such as exchange-traded funds and alternatives. The firm has also carried out advisory work, such as stress tests for the Irish banking system, that came about only because of the financial crisis. This proves, he says, that BlackRock can generate revenues even in difficult markets.

“We wouldn’t be getting those pieces of business it if wasn’t for the turmoil and dislocation that there is,” says Charrington.

Amundi, which has the second-biggest asset pool in Europe according to our list, has not released detailed financial information for the second quarter, but a look at its 2011 statement reveals it is in a challenging situation. Assets under management declined 7% during 2011 and gross operating income declined 9%. French bank Crédit Agricole – which owns three-quarters of Amundi, the remainder is owned by Societe Generale – had the most alarming share price drop in our study, falling 67% in the year ending June 2012.

Yves Perrier, chief executive of Amundi, accepts that this is a difficult period. At Funds Europe’s roundtable in Paris (see pages 20-28), he noted the profit margin for large institutional asset managers has fallen since the financial crisis.

“We need to take an industrial approach to the business in order to decrease costs – but one that also allows innovation,” he said. 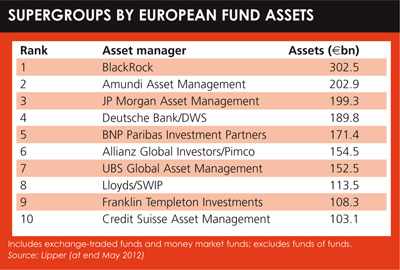 JP Morgan Asset Management (JPMAM), in third place by assets, was one of the few firms to increase its assets under management, by 0.5% year-on-year in the second quarter, but its net income fell 11% in the same period. The share price of parent firm, JP Morgan Chase, fell 9%; on a par with BlackRock and modest in comparison to the falls seen at other firms.

“Yes, we are having outflows in equity – which is inevitable in these circumstances – but we have inflows into fixed income, mostly in high value added products such as emerging market debt [and] high-yield bonds,” says Massimo Greco, head of continental Europe for JPMAM.

He denies that the decline in quarterly net income was significant and says the asset management division is continuing to hire staff and invest despite the downturn.

Some firms have performed well in recent months if measured by assets, though. Allianz says in its second-quarter statement that assets under management were up 15.9% compared with the same period in 2011, and that operating profit had risen more than 20%. UBS Global Asset Management says its assets under management rose 6% in the same period and that its pre-tax profits in the second quarter were up 9% year on year.

Change
What can large managers do to stay profitable in this difficult environment? One option is to take steps to control their cost base. Many firms have sought to outsource their back and middle-office operations, thereby turning fixed costs into variable costs.

The only problem is that outsourcing can require great changes in the way a company is run, and change is not always easy. “There’s a recognition in asset management and across financial services that we are not good at implementing change in our business. It tends to go over budget and over time limit,” says Gill Lofts, a partner at consultancy Ernst & Young.

Lofts’s warning applies to another strategy that firms can employ to reduce the cost base: simplifying their product range by closing unsuccessful funds. Although it is satisfying to offer clients a very large and diverse product range, it is not efficient to run sub-scale products. Even the biggest asset managers must be careful not to spread themselves too thinly.

“The killer of an asset manager is complexity,” says Simon Stratford, a principal at investment consultancy Investit. “Asset managers need to ask themselves: Do you really need the complexity you’ve got? If you’re sub-scale in some products, do you really want those products, [or] can you consolidate assets into a smaller range?”

A diverse product range entails significant IT and operational costs. Before launching extra products such as hedge funds, asset managers should ask themselves if the return will justify the outgoings.

Investit’s research suggests that the asset management industry could absorb 38% more assets under management without significantly increasing operational costs – an indication of unused capacity that is not efficient.

As Lofts says, big changes are not easy to see through at asset managers, which is why companies must manage change effectively by giving senior staff the power to make decisions and sticking strictly to time scales. Some asset managers have succeeded in managing change by employing project management groups.

Consolidation
For some players, acquisition by a big firm could be a solution to their problems. Richard Phillipson, also a principal at Investit, says one of his large clients has been approached by 40 asset managers that want to be bought.

And yet, surprisingly few deals have been done, partly because potential buyers consider the prices too high given the costs and risks associated with a merger.

“Your problem is you don’t know how sticky the client money is or the talent that you’re buying is,” says Phillipson. “Will the clients stay, will the managers stay, and is it worth all that messing around for an income stream that is rather difficult to predict?”

Mergers can be particularly problematic in the case of captive managers, which make up a large portion of the industry, because of uncertainties about the contract that exists with the rest of the group.

“I’ve gone on record more than once to say consolidation will happen, but I haven’t been proved right yet,” says Pars Purewal, UK asset management leader at consultancy PwC.

Asset managers have been sold successfully in the past. For instance, when Zurich Financial Services disposed of Threadneedle Asset Management in 2003. But the consensus among the analysts consulted for this article is that consolidation will only happen gradually.

What may occur is that some unsuccessful firms become progressively weaker and effectively wither away. This is unlikely to happen to any of the largest firms. However, for the big players, there could be pain ahead in the form of layoffs, cost-cutting and restructuring. Management must make sure these huge companies are agile despite their size.