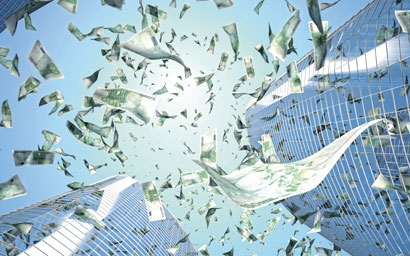 Central bank stimulus and huge fund inflows that followed it have propelled European stocks. Alix Robertson asks if this is good or bad for active investors.

A thick skin helps if you are a genuinely active manager in European equities. You’ve spent years, with sweat on brow, defending your anti-benchmark bets, while economies you depend on have nearly disintegrated; and all the time your reputation has been dragged through the mud, confused with that of a pseudo-active index-hugger.

Then the European Central Bank (ECB) announces a stimulus, millions of euros flow into passive funds, indices rocket and index-huggers can suddenly be heroes – at least in the eyes of the undiscerning. Index-hugger returns, generated with barely any sweat at all, might even, momentarily, be higher than the returns of their active competitors.

So, what is the European situation like for active investors and their portfolios?

THE QE BOOST
The improved sentiment towards European shares began in January when, after much anticipation, Mario Draghi, president of the ECB, finally launched a programme of quantitative easing (QE) and pledged to pour €60 billion a month into the bond market and buy more than €1 trillion in assets.

In response, funds flowed into European equities, with the European Fund and Asset Management Association (Efama) reporting net Ucits equity sales in February of €13.8 billion – up from €8.7 billion in January.

Research from EPFR, provider of fund flow and asset allocation data, also showed equity fund flows being buoyed by QE, drawing in $5 billion (€4.7 billion) a week globally in March as the most popular among the developed markets fund groups it tracks. In the first week of April, European equity funds were on track to post their 13th consecutive weekly inflows, indicating the fastest growth in nearly a year.

At Liontrust Asset Management, Stephen Bailey co-manages the Macro Equity Income Fund, and the Macro UK Growth Fund. The funds had active shares of 83.4% and 85.1% respectively at the end of March, meaning they deviate considerably from their reference benchmarks. Reflecting on the influx into European equities, he says: “The very nature of QE has created a very expensive bond market – we think it’s going to stay expensive for quite some time to come. Investors are now looking at migrating into other asset classes.”

Bailey currently sees opportunities in the financial sector, and the fund has exposure to rival fund managers Schroders, Jupiter and Henderson, which he says have seen strong fund flows into their European equity offerings.

That said, he thinks the future is unclear: “We’re constantly reassessing where we should be exposed to,” he adds. “We’re of the opinion that perhaps we’re not going to be seeing a decisive result from the [UK] general election and I think the worry is that we’re going to have a period of further uncertainty.”

“I suspect it’s possibly true that when you get big inflows or outflows to an asset class then stocks tend to behave with a bit more homogeneity. Inter-stock dispersion has been quite low this year and that may be one of the reasons,” he says.

He remains positive on the outlook for highly active managers. “We tend to see those periods as opportunities to pick stocks,” he says.

The improving conditions in the Eurozone have led Meech to give his portfolios a domestic bias. He has edged down the market-cap scale and is looking at domestic banks, travel companies and media stocks.

“If everything’s being treated the same, then obviously some anomalies will begin to appear,” he says. “We may well see a quieter period for performance for managers with active share, but that will change over time.”

STANDING OUT
In an effort to stand apart from the index-huggers, some active managers are publishing their active share. This statistical metric measures the difference between an investment portfolio and its corresponding benchmark.

Typically, highly concentrated stocks and low turnover – a long-term view, in other words – are what characterise high active share portfolios.

US-based growth equity boutique Polen Capital has brought out papers on active share, which it says is central to its philosophy, adding that a long-term outlook is important.

Founded in 1989, Polen Capital offered only one investment strategy – active domestic large-cap growth equities – until this year, when it launched a new global fund. The firm maintains an active share of between 80% and 85%. Its older fund runs a concentrated portfolio of around 20 stocks; the new strategy features 29. Its focus is on companies with sustainable, above-average earnings growth.

“There are certainly times where there might be a lot of momentum in the stock market and in a particular index, and in some cases it becomes difficult to keep up,” he explains.

But this is where the long-term outlook stands to work, because experience has taught that these periods usually don’t last long – perhaps only a year or two, he says – before becoming unsustainable.

“Even if you’ve lost ground in the short term, you tend to make up that ground once the momentum ceases,” he says. “We’re willing to be different from the benchmark, even if that means short-term underperformance, because we know those types of markets typically don’t last long and tend to normalise.”

Hemmant is part of a team that runs the Parvest Best Selection Europe fund, which has 47 stocks and an active share of 81%. He says that as a highly active manager there are questions to be asked about the present valuations in Europe.

“We’ve had a 60% move up in European equities – it’s all rerating. It hasn’t been supported by earnings growth at all, it’s been cash coming in chasing particular aspects of the market, predominantly yield.”

Yield is the aspect that investing keeps coming back to, he says, because of low yields in the bond markets.

“We see that come through into particular parts of the equity market, and it’s then obviously difficult from a fundamental perspective to decide on whether you want to participate in that.”

True active management, he says, is about “being a long-term investor in a business that you think is a great franchise and creates economic value”. He adds that flows into index funds that boost the percentage position of a sector or a stock, without that lift being justified by fundamentals, are a distortion and a risk.

Following a trend such as the current interest in European equities could lead to a back-to-front approach, Wallington warns. “It’s not passive investors that will drive the long-term economic value of a business; it’s the business itself.

“There will often be scenarios where prices get out of sync in the short term and its not beneficial to active investors … But, ultimately, I’m fairly relaxed.

“Even if market prices are moving away from me, inasmuch as they’re concentrated in areas where I don’t have any active interest, that will correct itself.”

For Wallington’s fund, the greatest overweight is in the consumer sector, both staples and discretionary companies. The focus is on the long term, with investments in companies that have been around for some time, such as fashion house Louis Vuitton and wine producer Château d’Yquem.

“We do think that there are some fantastic long-term franchises in the consumer space, where brands have tended to be very sustainable,” he says.

Confident though he is, Wallington is also realistic about the nature of highly active management. “We realise that you can’t manufacture portfolios for every eventuality, for every style characteristic that exists in the marketplace,” he says.

While there may be some tempting options in European equities at present, it seems that among these highly active managers, sticking to quality, long-term investments remains the priority. They will hope their clients robustly ignore the returns made with less sweat by others.