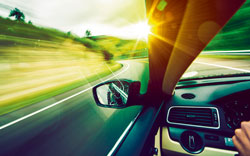 Chinese equities stand to become a normal part of global equity portfolios in years to come. Nick Fitzpatrick finds that the renminbi ETF is a vehicle towards that.

Also, at the beginning of the year, CSOP Asset Management, a Chinese asset manager, and Source, an ETF provider, launched the first ETF in Europe to offer physical exposure to China’s domestic equities market. The CSOP Source FTSE China A50 Ucits ETF was made possible with permission to invest in A-shares under China’s renminbi-qualified foreign institutional investor (RQFII) quota scheme, which allows renminbi held offshore to be invested back into domestic markets. 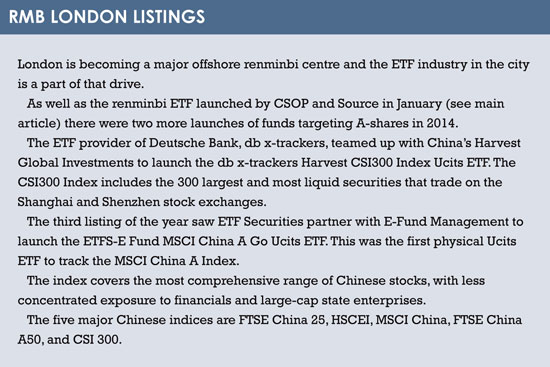 A-shares are equities listed on the mainland and account for 80% of total listings of Chinese companies, the remainder being in Hong Kong (H shares) and Singapore (S Shares).

Analysts at Moody’s say that, as global access to the A-shares market increases, Chinese A-shares are more likely to be included into broad global equity indices.

In a report, New Wave of Chinese ETFs Provide Foothold for Western Asset Managers, Moody’s says that, as investing in Chinese equities becomes more practical, index providers such as MSCI, S&P and FTSE will likely include them in their broad global benchmarks.

“This will open an important channel for indexed investment capital to A-shares and will broaden investor acceptance of a new asset class,” the report says.

Moody’s also says that early movers in the RQFII ETF market will benefit from interest in a hitherto hard-to-access market.

“This new avenue into Chinese A-shares is credit positive for the early movers into this product class, particularly those firms targeting investors located outside of Asia when raising assets for RQFII ETFs,” the report says. “For foreign investors, and particularly retail investors, RQFII ETFs make accessible a once largely unattainable asset class in a liquid fund vehicle backed by physical assets.”

The renminbi ETF that Hong Kong-based CSOP Asset Management and Source launched in January invests in the shares of the largest 50 companies in the China market. The fund is available to both retail and institutional investors and is denominated in renminbi with US dollar and sterling share classes.

CSOP is currently the largest RQFII manager of A-shares globally. At the time of the launch Chen Ding, chief executive officer, said: “There has been high demand for our Hong Kong-listed ETF and we expect similarly strong interest from Europe.”

CSOP’s existing FTSE China A50 ETF in Hong Kong is the largest and most actively traded RQFII ETF.

TRACKING ERROR
The 2012 move by the Chinese government to approve new RQFII quotas for asset managers to issue renminbi-denominated ETFs that track A-share indices was beneficial to ETF providers and investors. Moody’s says the new quotas largely eliminated problems with earlier ETFs that would have to track China indices using derivatives or a borrowed QFII quota, which could be costly.

Since their ability to gain A-share exposure was limited, says Moody’s, these funds would often trade at significant premiums to their net asset value when demand for A-shares was strong. But as RQFII ETFs have a creation and redemption mechanism that gives flexibility for increasing and decreasing A-share exposure as the fund’s assets fluctuate, there is a better tracking of the underlying index.

In May, Morningstar Asia said that providers of ETFs that track China indices need to continue improving transparency and accuracy of disclosures around performance. 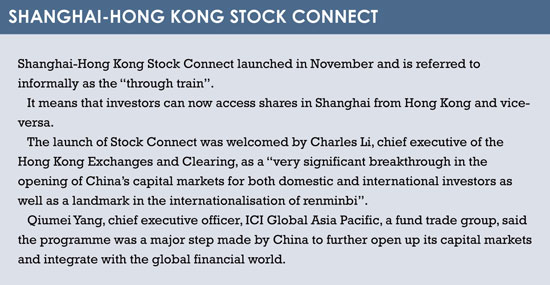 The comment came in a Morningstar Asia research report that looked at the tracking efficiency of Chinese equity ETFs.

“In general, we found that both Chinese equity and emerging market equity ETFs demonstrate similar levels of tracking efficiency, albeit at inferior levels than their developed market counterparts,” said Jackie Choy, ETF strategist for Morningstar Asia.

The Morningstar report, Called On the Right Track: Measuring Tracking Efficiency in Chinese Equity ETFs, examined 33 ETFs listed in markets around the world that track the five major Chinese equity indices. Morningstar analysts looked at tracking error, which is the measure of volatility of a fund’s return in relation to its benchmark, and at tracking difference, which is the difference between a fund’s actual return and the benchmark’s return over a specific period, on an annualised basis.

“Better disclosure will help investors compare and evaluate ETFs through common tracking measures, such as those we’ve proposed in our report,” said Choy.

Morningstar also found that synthetic ETFs, which use derivatives to simulate the return of Chinese indices, tended to have superior tracking error, but greater levels of tracking difference, compared with physical-replication Chinese equity ETFs.

FINANCIAL LIBERALISATION
Shanghai-Hong Kong Stock Connect is the latest way in which, over the years, the Chinese government has created methods for foreign investors to invest in A-shares (see box).

The qualified foreign institutional investor (QFII) programme, a forerunner of RQFII, was launched in 2002 and meant that approved foreign investors could obtain quotas to buy and sell mainland securities

According to Moody’s, as of last year there were 197 approved foreign QFIIs and, combined, they had a quota of nearly $42 billion.

The government launched the RQFII programme in 2011. This allows renminbi held offshore to be invested back into mainland securities. The programme is also subject to quota limitations.

Both QFII and RQFII allow foreign investors to invest in A-shares, but these products have targeted mainly fixed income and ETFs. RQFII hubs now stretch from Hong Kong to Singapore and London.

A recent Aite Group report, Internationalization of the Renminbi: Weaving a Web for the Redback, shows renminbi’s use in trade finance will increase significantly over the next three to five years. The size of China’s economy and its role as a leading power in imports and exports should mean the renminbi will gain significant traction in the universe of trade invoicing and settlement, which will later be followed by its use for global payments, especially for cross-border Asian transactions, and, in the longer term, by its use as an offshore investment currency.

ETFs have acted as a relatively safe way for foreign investors to invest in Chinese markets in the past. With the momentum of China financial liberalisation behind them, the new renminbi ETF products are likely to grow more and more.