In the ten months to the end of October, emerging markets equity ETF/ETPs gathered net inflows of $3,164 million (€2,435 million), accounting for nearly 40% of total net equity inflows, according to ETFGI. And they represented nearly 27% of fixed income ETF/ETPs, with net inflows of $1,919 million.

But the ways in which investors are choosing funds in these markets is changing, with regional concepts falling out of favour.

“First, they are low cost. There are large, liquid ETFs where the spreads are 20 basis points or less. Buying the underlying stocks costs a lot more.

“Second, they offer diversity at a low risk. You can invest in a highly diversified index while taking out the individual stock risk.

“Third, they are incredibly liquid. So in one trade, you can have that exposure in or out: quickly and efficiently.”

Huver says Vanguard offers a broad-based emerging markets fund. “And we selectively offer core single country mandates in markets that have a sizable portion of global market capitalisation or have enduring investment merit to local investors.”

Stephen Cohen, head of Investment Strategies in Europe, the Middle East and Africa for iShares, says investors are moving away from Brics.

I rarely get asked what I think of Brics. There are historic similarities in terms of long-term sector growth but the individual countries are very different.”

iShares offer access to emerging markets in three ways. “The Emerging Markets ETF offers broad exposure to the MSCI Emerging Markets Index. Then we have regional funds, ETFs covering Asia, Brics, Latin America and Eastern Europe. And then there are individual country funds.”

Cohen says the individual country funds are growing rapidly. “The Brazil and China ETFs are reaching critical mass, with funds domiciled in both America and Europe.”

This is driven by the increasing sophistication of investors. “Emerging markets has become a bigger part of people’s portfolios in the past ten years. As investors increase their exposure, they begin to take a more granular approach.”

“Investors are increasingly looking for specific asset allocation, and they are demanding the same flexibility in emerging markets as developed markets.”

“Regional funds have a strong place, but as markets develop, it will be about country funds. Investors want to allocate generally to emerging markets and then tilt towards a specific country.”

Of the individual Bric countries, Cohen says India is well-placed, while China “has underperformed for some time, making it cheap compared with both emerging and developed markets”.

He says Brazil saw strong performance at the beginning of the year, but has since lagged. India has seen good performance in the last quarter as news around potential reform drove markets upwards.

While access to a number of diverse markets in a single fund is attractive to investors, both Brics and emerging markets funds pose a tracking challenge for managers.

Alistair Kellett, international ETF analyst at Morningstar, says there is a pronounced difference in tracking error between physical ETFs and those based on swaps across both Brics and emerging markets funds.

ASYNCHRONICITY
“The four Bric funds [on Morningstar’s database] each follow a different index, which makes comparison difficult. But we do see a pattern of lower tracking error under the synthetic ETFs,” he says.

“On the MSCI Emerging Markets ETFs, we have eight funds following the same index, and there is a similar pattern where synthetic replicators show lower tracking error than physical funds.”

Kellett says this difference is particularly amplified in emerging markets and Brics funds. One contributing factor is asynchronicity. “The time zone differences between the ETF and the underlying shares it is tracking means there are times when the shares are trading and the ETF cannot.

“Brics funds tend to hold more illiquid securities. So the index will assume a price, but due to a lack of liquidity, the fund might have difficulty transacting at those prices.

“And individual markets have restrictions on buying and selling shares. There are capital controls in Brazil and China has restrictions on foreign entities buying local currency shares.

“Often, the fund is holding an American or global depositary receipt. This is a proxy for the stock itself that trades on a New York or London stock exchange. So that creates a layer of simulation or distinction between the actual stock and what you are buying, which in turn allows for a little bit of deviation.”

TRACKING ERROR
Kellett is not surprised by the tracking differences between physical and swap ETFs. “The synthetic providers outsource tracking error. They are entering into a swap where the counterparty effectively promises them the return from the benchmark.”

Cohen agrees that physical funds can have greater tracking error. “But with swap funds, the deal costs will appear in the fund performance at some point. 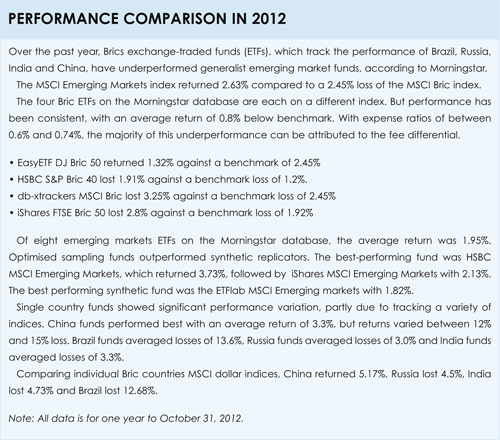 “And the risk profile of these funds is different. There is a counterparty risk in swap products.”

But Miller likes swap funds. “Synthetic ETFs have done well. But investors need to look at total costs, not just the headline total expense ratio [TER], but the spread. Over two years, the greater spread might be higher than the total expense ratio. Paying more for an ETF which holds the full index might be worth it.”

“I am not really concerned on a daily basis whether an ETF exactly matches the index. I want the relative return to the index over a period of time.

A fund might have a low tracking error but a high performance difference.”

“And tracking is particularly difficult in emerging markets: the index contains hundreds of diverse stocks.”