It is a year since Bill Gross, co-CIO at Pimco, stunned the fund management industry with an exchange-traded fund based on his Total Return Mutual fund. Nick Fitzpatrick looks at how each has performed.

Put aside the amusing, though flawed, observation that Pimco is competing against itself, the real cause of surprise that Gross chose to launch an ETF is that he would have to provide total transparency about his portfolio holdings.

Though ETFs are historically passive products that replicate a benchmark, Gross’s ETF is not; like the mutual fund that spawned it, the Pimco Total Return ETF is an active fund. Portfolio transparency is a fact of life for ETFs and leaves Gross’s largely winning strategy open to being copied or gamed.

With this in mind, many may still wonder why he chose to launch an ETF version of his mutual fund. Unfortunately, Pimco would not provide someone to speak to, but Deborah Fuhr, a London-based ETF expert, points out that the ETF offers Gross’s strategy an extra distribution channel that is not open to the mutual fund. 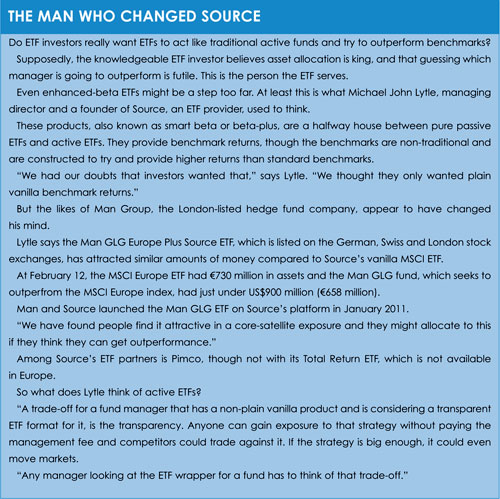 “Being listed on an exchange represents a new distribution platform,” says Fuhr, a partner at ETFGI, a research house.

The fund is listed on NYSE Arca and distributed in the US. Pimco says it does not have plans to distribute the fund in Europe, though its performance will be of interest there, where active ETFs have also been launched.

Funds Europe went to press before the February 29 “birthday” of the ETF so one-year figures were not available. However, Lipper figures show that between the fund’s launch date and the end of 2012 the ETF saw $3.7 billion (€2.8 billion) of inflows, while for the entire year, the mutual fund saw inflows of $16.1 billion.

Assets under management for the end of January 2013 in the ETF were $4.05 billion, according to Bloomberg data. For the mutual fund, which was launched in 1987, the figure was $285.60 billion.

Two other sets of figures are also notable. The ETF has had better returns (see table), but it is also more expensive.

The returns could have something to do with the stance of the Securities and Exchange Commission (SEC), the US financial regulator, on derivatives. “The ETF has had better performance than the mutual fund driven by the fact that the portfolio holdings are different. The ETF cannot use derivatives as the ETF was launched when the SEC would not allow new funds to use derivatives,” says Fuhr.

As for the higher cost, this is likely to do with economies of scale and the ETF will probably get cheaper as it builds mass. Gross’s mutual fund, don’t forget, is the largest in the world.

The figures signal success for Pimco’s ETF and potentially the same for providers of active ETFs. In particular, the flows and the assets under management may answer critics that question whether investors want active ETFs.

But could that promising picture be limited only to providers in the US?

European figures, from ETFGI, could hint at a different story.

The market share of active exchange-traded products (ETPs), including ETFs, was 0.7% of all ETPs at the end of January and the sector had $2.6 billion of assets under management.

“The challenge to date is that firms that launch active ETFs, with the exception of Pimco and WisdomTree, are not well known,” says Fuhr.

She notes that another challenge to growth is that investors approach active fund selection differently from traditional passive funds.

“Typically, when looking at active funds, investors use different processes. Usually they want a three-year track record and for a fund to have assets under management of at least, say, $75 million to $100 million.”

Pimco has shown that active ETFs can succeed, though with Gross being one of the best managers of his generation, success will possibly depend on star quality like this.

The greatest benefit for investors would be paying a passive-like fee for an active strategy, particularly as a lack of confidence in active managers’ ability to outperform continues.