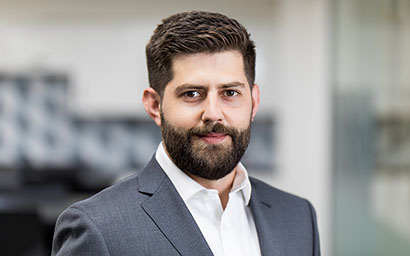 Jason Guthrie’s longstanding interest in cryptocurrency dovetailed with his professional role when he became head of digital assets at WisdomTree in 2018. He shares his experience of setting up its bitcoin and ethereum exchange-traded products (ETPs) and his views on the direction of cryptocurrency.

WisdomTree is an ETP specialist, which launched its first exchange-traded funds in 2006, and its first cryptocurrency product in 2019.

But with around 5,000 cryptocurrencies to choose from, the list has to be whittled down when selecting the right ones for an investment portfolio. Key criteria for consideration include a stated use case, track record, stability and signs that the currency is consistently attracting assets that are growing in size. To date, bitcoin and ethereum are leading the pack.

While crypto might mean secret, there is no mystery about where WisdomTree keeps its ETPs, which are physically backed, rather than synthetic: “There’s something in a vault,” Guthrie confirms.

However, choosing a cryptocurrency custodian is a little different than appointing one for more traditional assets, as they have a different approach and skillset, and a particularly strong focus on cybersecurity. So, the custodian who got the job was not one of the usual names; WisdomTree went with online crypto platform, Coinbase.

Here today, here tomorrow?
As cryptocurrency continues to develop as a new asset class, some might wonder if it is going to hit the big time, stall or fade away.

“There are never those big ‘cliff-edge’ moments where things move from obscurity to mainstream, but its prominence is definitely growing,” says Guthrie.

He reports that the institutional-investment community is gradually getting more involved, with demand growing slowly but steadily. The volatility at the end of Q1 this year, when Elon Musk appeared to disparage cryptocurrency via Twitter, slowed down the process. But there has not been a dissipating of interest, far less a mass exodus of those who had been dipping a toe in crypto waters: “It’s early days for cryptocurrency,” concedes Guthrie. “And I think as long as you understand that, believe in its growth and are investing in it for the long term, it’s something to make appropriate, risk-adjusted allocations to.”

As it becomes accepted as an investible asset class, cryptocurrency is unlikely to escape the scrutiny that its stablemates are accustomed to, as regulators move in the direction of bringing cryptocurrency and crypto-related activity into the fold. But this is easier said than done, as not all jurisdictions are looking at the same element of it at the same time, at the same pace or in the same way. Some jurisdictions are focused on looking at central-bank adoption of digital currencies, some on regulating service providers and others are more focused on investment products.