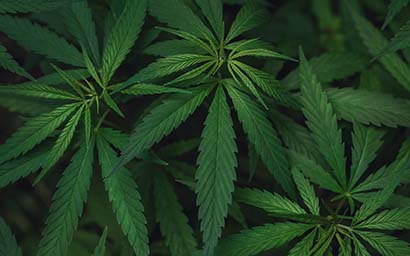 As attitudes to cannabis change across the globe, Fiona Nicolson examines the highs and lows of gaining exposure to the plant through ETFs.

Cannabis is well known as an illegal drug for recreational use, but it now has another, more salubrious reputation. It is becoming increasingly recognised for its health benefits.

Attitudes towards cannabis – both recreational and medical − have been changing over the past few decades. Momentum has been building in the US, where the number of states legalising the recreational use of cannabis continues apace.

But it’s not just the US which is relaxing its stance. Attitudes in Europe have been evolving too, with more countries becoming receptive to the medicinal use of cannabis in particular. However, development has not been homogeneous. The Netherlands legalised cannabis for medical use in 2003, while others such as Greece and Germany waited a little longer, following suit in 2017.

There have been other recent signs that medical cannabis is being viewed in a positive light. Towards the end of last year, the European Court of Justice ruled that CBD (cannabidiol, a medically beneficial substance found in the cannabis plant) is not a narcotic substance. Soon afterwards, in another landmark move, the UN Commission on Narcotic Drugs reclassified cannabis and removed it from a list featuring addictive opioids such as heroin.

Signs of its move into the mainstream have been apparent in the UK too. British American Tobacco took a 19.9% stake in a Canadian cannabis company earlier this year, then invested in another a few months later. Also, Cellular Goods, a London-based cannabis business which listed on the London Stock Exchange earlier this year, hit the headlines on reports that David Beckham was backing it. Its skincare products are due to launch in the autumn.

The numbers demonstrate how far things have come. The European Cannabis Report, published this March by cannabis advisory company Prohibition Partners, estimates that more than 60,000 people were able to access cannabis medications for the first time in Europe last year. Medicinal cannabis is used to help ease serious illnesses and conditions such as cancer, multiple sclerosis, epilepsy and chronic pain.

The report also anticipates that the European medical-cannabis market will be worth €403.4 million by the end of 2021 and that it will grow at a compound annual rate of 67.4% from this year, hitting €3.2 billion in 2025. According to Prohibition Partners’ estimate, Germany alone is expected to constitute more than half of the European market until 2024 and will be worth at least €840 million.

These have not gone unnoticed. According to Morningstar data, they had estimated net flows of nearly €23 million and just under €45 million respectively over the 12 months to June 30, 2021. Looking at year-to-date performance, Rize’s returns were 31.57% and Han ETF’s were 24.4% at June 30.

The cannabis journey has had its ups and downs, though, reflects Hector McNeil, co-chief executive at HanETF, which also invests in themes such as space and cloud technology. “The sector had a huge growth boom in 2018/19. Then the bubble got pricked and valuations got more realistic, but we’ve since seen a resurgence.”

The perception of cannabis is a challenge, he adds. “There’s still a fair bit of stigma around cannabis as a gateway drug, but I think that’s less relevant for the European market on the basis that you can only invest in medical-cannabis companies and medical-cannabis ETFs.”

Regulatory risk
So, who are these cannabis companies and what do they do? Some recent top-ten holdings within the HanETF cannabis fund include Charlotte’s Web (a US company that makes hemp-based health supplements), GW Pharmaceuticals and Scotts Miracle-Gro.

The last of these – based in Ohio, and a familiar name to gardeners looking to improve their roses and tomatoes – recently announced the creation of a subsidiary to focus on investments in the cannabis industry.

Meanwhile, the UK’s GW Pharmaceuticals, which was founded 23 years ago and specialises in cannabis-based epilepsy medication, was acquired by Dublin-based Jazz Pharmaceuticals earlier this year, reportedly for more than $7 billion (€6 billion).

More and more companies are getting involved, says McNeil. “Our holdings started off at about 13 when we launched the ETF and now it’s well over 30. Every time we do a rebalance, we seem to add about ten new companies, so it’s a burgeoning sector from that perspective.”

Rize seeks out companies that potentially stand to benefit from the increased adoption of medical cannabis, focusing on companies in the biotechnology/pharmaceutical, hemp and CBD sectors.

Co-founder Rahul Bhushan says: “There’s going to be an entire tech industry that’s going to sit around the cannabis industry and we’re interested in those that provide services to the medical-use market.”

Although medical cannabis is becoming more acceptable, the rules and regulations remain tight. Last September, the UK’s Financial Conduct Authority set out its approach to assessing cannabis-related businesses looking to list in the UK – which it permitted, as long as they are medicinal-based. It also drew attention to the potential to fall foul of the Proceeds of Crime Act (POCA) if they were not. In other words, they must not operate in the recreational-cannabis space (or in any other activity illegal under UK jurisdiction).

McNeil has already identified such a possibility and taken action to avoid it, as he explains: “It’s in the index rules that if a stock diversifies or moves into the recreational sector, it has to be taken out of the ETF immediately.

“We did this with Namaste Technologies, within two weeks of listing the ETF originally, because it diversified into the recreational sector. But this proved that we could spot it and remove it pretty quickly. I think that’s a big plus for investors.”

In the future, cannabis has further to go, according to Bhushan: “I think the medical-cannabis ‘story’ is going to get much bigger in Europe. As a continent, in terms of demand, it’s bigger than the US.”

The full potential of the cannabis plant itself is yet to be explored, which could lead to more discoveries. “We’re seeing a lot of capital pour into biotechnology start-ups that are looking to understand what the medical applications could be for the cannabinoids in the cannabis plant that we don’t yet fully understand,” Bhushan adds.

But while he expects medical cannabis to expand further in Europe, that doesn’t necessarily mean that the suppliers will originate in Europe, he says. “I don’t know if a lot of the companies providing medical-cannabis products will be European. Given that so much of the capital that backs the industry is in the US, and given that the most sizeable companies are either in Canada or the US, I think it’s far more likely that a lot of the cannabis companies that spring up in Europe will end up being acquired by the ‘giants’ in North America.”

“You only need to look at the number of countries that have legalised cannabis for medicinal use,” says Bhushan, looking at the growth trajectory of medical-cannabis products. “A decade ago, it was less than 15 – we’re already close to 70 now. I think that number is going to increase in the years ahead and it’s a curve that’s exponential.”