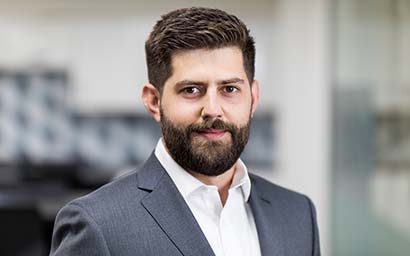 Jason Guthrie, a digital assets expert at WisdomTree explains the risks and the attractions of bitcoin.

If cryptocurrency was a band, then it may be moving past its ‘difficult second album’. After being hailed a gamechanger just a few years ago, it seemed to stall, not able to launch itself into the mainstream. It remained, for the majority, a niche product.

But, today, it is gaining some legitimacy. In October, PayPal announced it would accept bitcoin on its platform. This was followed in February, with Elon Musk announcing – with the expected controversy – that he would exchange $1.5 billion of Tesla cash for bitcoin.

The race, it seems, is back on.

Jason Guthrie is head of capital markets and digital assets for Europe at WisdomTree. He and the company have long been advocates of including cryptocurrency in a portfolio. So much so that, in December 2019, they launched the WisdomTree Bitcoin ETP.

“Cryptocurrencies,” Guthrie says of the launch, “really represented the rise of a new asset class, which was something that we hadn’t seen for a very long time. We felt that they had evolved organically and were here to stay. We also saw that there was a huge gap between the crypto world and the traditional investment space. There was a big opportunity to bridge that.”

Guthrie says that cryptocurrencies make up only around $250 million of WisdomTree’s AUM. The global ETF business for WisdomTree comes to about $70 billion. The figure representing cryptocurrencies, he admits, is an underestimate of how much work and effort goes into that segment of the business.

“Like the internet”
There is a lot of caution about investing in cryptocurrency. In January, the FCA warned: “Investing in cryptoassets, or investments and lending linked to them, generally involves taking very high risks with investors’ money. If consumers invest in these types of product, they should be prepared to lose all their money.” Guthrie acknowledges this hesitancy. “I would never encourage someone to invest in something that they don’t understand,” he says.

He adds: “It’s important to think about it as part of the bigger picture. It’s like the internet of the early 90s. In 1993, nobody could have accurately predicted Amazon or Apple or Google and the incarnations that they’re in today. But you could have said that the internet was going to be a big deal in how we share information. We’re seeing that in the cryptocurrency space. It’s going to do to financial services what the internet did for information sharing.”

“The volatility is high,” says Guthrie, “but not so high that it’s a barrier. When it’s contextualised as a percentage of holdings, and in how it relates to other assets, it can be an attractive part of someone’s portfolio.”

He adds: “When you think about it on an overall portfolio basis, you have to think about how the assets move in relation to one another. If one is going up and the other is going down, your overall volatility is lower. That’s why people search for uncorrelated assets. Bitcoin, I think, represents the most uncorrelated asset in the market.”