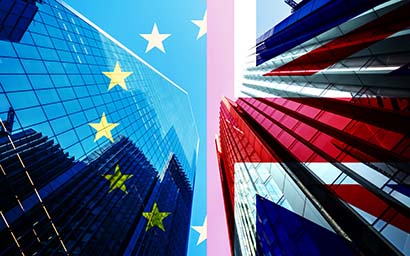 The UK has said it won’t be implementing the incoming Central Securities Depositories Regulation regime. Fiona Nicolson looks at the challenges this could present for ETFs.

Rishi Sunak made a number of significant statements in his first year as the UK’s chancellor of the exchequer, including his announcement last summer about his country’s position on the EU’s Central Securities Depositories Regulation (CSDR) settlement regime.

In Sunak’s estimation, the United Kingdom’s departure from the EU meant that it had “taken back control” of the governance of its financial sector. In the same speech, he stated that the UK will not be implementing the EU’s new settlement discipline regime set out in the CSDR.

According to Pierre Colladon, senior adviser in strategy and market infrastructures for Societe Generale Securities Services, certain issues following the UK’s decision to opt out of the settlement regime directly affect the ETF industry.

“As ETFs are traded on a trading venue, the settlement instructions failing to fully settle on the due date will be in the SDR scope irrespective of the market − secondary or primary.

Therefore, he says, from an ETF perspective, the announcement that the UK will not implement the EU’s SDR is an important one, as the CREST penalty regime will continue to apply and buy-ins will remain a CCP topic.

“Does this mean that nothing will change in the UK and there will be a huge divergence with the EU?  At this stage, it is not clear.”

Looking at the topic of penalties, Colladon points out that last summer, HM Treasury consulted on settlement efficiency in the UK and potential changes to settlement discipline measures. “This has provided the industry with the opportunity to express its support for a penalty regime more closely aligned with the one used by the CSDR,” he says.

“Moreover, the UK’s central securities depositary Euroclear UK and Ireland (EUI) has opened the door to a potential new regime.”

But, he adds, there is some hope: “Should the EC consider the arguments and proposals received following its consultation, the CSDR buy-in requirement will be reviewed.”

A key decision
It’s not just the UK which isn’t implementing the CSDR settlement regime. For the time being, the EU is not implementing it either. It was originally due to be introduced in February this year, but Esma (the European Securities and Markets Authority) recently decided to postpone it to February 1, 2022 due to the impact of coronavirus on preparatory work.

In the meantime, the European Commission will have issued its proposed amendments and the EUI may have given some indications on its future regime. “Then we will know how outstanding settlements on ETFs will be treated in the EU and the UK,” says Colladon.

The CSDR settlement discipline regime is expected to have a beneficial impact, according to Esma. A spokesperson tells Funds Europe that it is expected to contribute to increased settlement efficiency, buyer protection and market stability. It can also “drive standardisation of market practices and incentivise straight-through processing”, they explain.

Esma does anticipate some challenges, however. “We are aware of the complexities of the CSDR settlement discipline regime, which will affect a wide range of market participants,” the spokesperson says. Indeed, CSDR is likely to affect participants such as trading venues, investment firms, credit institutions and authorities.

The regime will also require “significant” IT system changes, market testing and adjustments to legal arrangements between the parties concerned.

The regulatory agency highlights that the UK will have to comply in some cases. “Regarding the impact of Brexit and the UK authorities’ decision not to implement the CSDR settlement discipline regime, we would like to point out that UK participants would nevertheless have to implement the regime in connection to their activity in the EU,” a spokesperson says.

This will particularly apply to UK firms that are participants of EU CSDs, or if their transactions are settled at the level of EU CSDs.

Esma adds: “The European Commission will assess whether clarifications or changes to the settlement discipline regime may be needed, as part of the ongoing CSDR Review.

“In the meantime, we encourage market participants to continue preparing for the implementation based on the current requirements.”

In good shape
The European ETF market is considered to be in good shape at the moment, according to the Euroclear white paper ‘Europe’s ETF industry geared for the next level’, published in January this year. It says that 2020 demonstrated the “extraordinary resilience of the product”. This follows the “severe stress test” that it experienced in the first half of 2020, partly due to Brexit.

However, Euroclear acknowledges in its white paper that there is more progress to make, with respect to smooth running of the ETF market. It points to specific areas, including settlement, raised in a recent PwC paper, ‘ETFs: unlocking future potential’. The paper says that practical solutions are needed if ETFs are to “flourish even further” in Europe.

“These solutions should address the current lack of ETF-specific rules and some of the nuances of ETFs – such as transparency, venue choice, clearing and settlement,” the paper states.

A spokesperson for BlackRock also points to settlement as a key point, commenting: “BlackRock are supportive of the CSDR settlement discipline regime and are active participants in the current discussion on the future shape of CSDR in Europe.

“The interconnected nature of settlement systems across Europe and the globe mean that appropriate calibration of the settlement discipline regime is even more important to ensure a level playing field and the avoidance of regulatory arbitrage”.

Some ETF participants believe it is unlikely there will be any meaningful disruption following the UK government’s decision not to implement the CSDR settlement regime, however.

According to Howie Li, head of ETFs at Legal & General Investment Management (LGIM), the efficient settlement of ETFs is a very important part of the industry.

“Over the last decade or so, we’ve certainly seen improvements in the connection between different exchanges and also tradability of ETFs and settlement of ETFs across countries,” he says.

But, he highlights, as Brexit was coming in, there were issues with CREST. Over the past few years, ETF issuers started moving into the ICSD – the international security depositary model – to ensure that everything would remain fluid, regardless of the UK’s departure from the EU.

“Pretty much everyone moved across to the ICSD, including ourselves, well before Brexit took place,” says Li, pointing out that as the ICSD has been around for a number of years, any issues that might have arisen have been ironed out.

“Our experience of moving over to it has been extremely smooth. One of the ways it’s helpful is that no matter what exchange you’re on, it all connects to this ICSD settlement framework,” he says.

The industry makes it work
Li adds: “When it comes to ETFs, the industry has always found a solution to make sure things remain tradeable, and moving to ICSD is one example of that. Regulations did not drive that move initially – it was the industry itself.”

So, despite the UK’s decision not to adhere to the CSDR settlement regime, Li does not believe that this will have as big an impact as people might imagine: “We’re on the other side of Brexit already, and things are continuing to trade absolutely smoothly.”

Li adds that, as an ETF provider itself, alongside the rest of the market, LGIM works closely with authorised participants, such as investment banks that are selling on shares in ETFs to end clients or intermediaries, as well as market makers who ensure secondary markets are there.

“We’re all in this together, to make sure this system continues to work and evolve efficiently. While CSDR might introduce some questions that are open-ended at the moment, I would question whether that affects efficiency or not, because a lot of the solutions tend to come from the industry first rather than regulation first,” says Li.

He concludes: “Everyone’s pretty confident that the ecosystem is going to remain trading and the challenge will be to remain sure that everything remains efficient through this whole process.”