Biodiversity loss
France’s Ossiam is another ETF provider that has taken up the food theme. In February, the firm unveiled the Ossiam Food for Biodiversity Ucits ETF, predominantly designed to tackle the destruction of global biodiversity.

When the fund launched, chief executive Bruno Poulin warned that “if current food production methods and diets are not drastically improved, there are likely to be calamitous environmental, social and political outcomes”.

The firm says that portfolio construction leads typically to a 99% reduction in negative biodiversity impact for the fund. This is the equivalent of saving 218km² of pristine habitat for $100 million invested.

“We can’t just exclude food companies,” says Carmine de Franco, Ossiam’s head of research. “Assume that we shut down Tesco, Unilever, McDonald’s tomorrow, are we going to solve the problem? No. We need to raise awareness, engage with these companies, and get them to show their real track record on physical metrics.”

According to de Franco, clients like the concept of biodiversity in the fund but often query its investment in McDonald’s. “My answer: they sell three billion burgers per year, so this is a pretty important stakeholder for climate and diversity,” he says.

No disclosure
Transparency across the theme is an issue. With climate metrics, there is a regulatory obligation for companies to disclose their own direct emissions, de Franco says. But companies are still not required to disclose Scope 3 emissions. 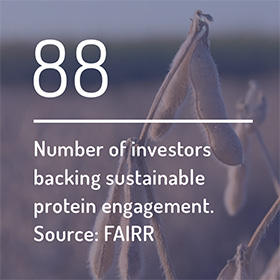 “For biodiversity, there is no such requirement. They don’t have to tell us how many tonnes of beef or potatoes they are using,” he explains.

When companies are required to disclose, the situation will be better, he adds. For the time being, the fund relies on models, available data, and maps of the world where biodiversity is endangered.

But Rize ETF’s Forbes says: “This is where the inadequacy of existing ESG data sets really comes to the fore, because you have companies like McDonald’s and Starbucks who can afford to pay a fortune to put out a sustainability report telling you how great they’re doing.”

He adds that “all you need to look at is the simplest of climate metrics, namely the emissions from beef production, to know where the focus should be”.

On CDP’s deforestation score, both Starbucks and McDonald’s scored poorly in 2020, with Cs and Ds across the board.

Despite progress on the number of companies disclosing how they are managing deforestation – 2020 saw a 27% increase – CDP has stated that action is “too slow and ambition too low”.

As the world’s population continues to grow, food and water security are set to be among this century’s biggest challenges. And while scientists have warned that deforestation and biodiversity loss are increasing the risk of future pandemics such as Covid-19, another pressing issue involves the habits of consumers themselves.

Ossiam’s de Franco says: “We cannot afford our consumption – if you think of increasing population and the changes in food habits from emerging middle classes, we don’t have enough resources. At some point, either we manage the transition, or we will end up fighting wars for food.”

Exponential growth
The momentum for change is building, however. Maria Lettini, executive director of the FAIRR initiative, an institutional investor group involved in impact investing, points out that assets under management from institutional investors invested in support for sustainable protein has grown exponentially year-on-year.

“Investors, who have been focused on some of the risks of how we are producing animals for food, are now looking at the climate impacts as well as the health impacts, and starting to think about what some of the sustainability risks are even with plant-based meat alternatives,” she says.

Companies like McDonald’s have to move quickly with their net-zero pledges, she says. “They almost can’t be left behind.”

At the same time, consumers’ appetite for vegan alternatives continues to increase. According to Dutch bank ING, European sales of meat and dairy alternatives have grown by nearly 10% a year from 2010 to 2020. By 2025, the market in Europe and the UK is expected to be worth €7.5 billion. 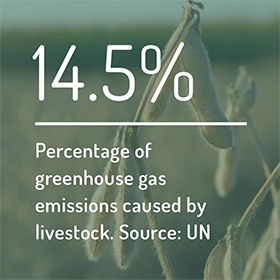 According to Lettini, thematic ETFs and funds targeting alternative protein companies will play a key role in how the space evolves. “The only way this is going to be truly disruptive is if you funnel and channel money into these companies and into the sector,” she says.

“On the investment side you have seen a growth in themes whether they be focused on food or nutrition, or solution providers. All that is really positive, but there probably needs to be more products on the market.”

At present, the basket of companies available remains relatively small. ETFs that call themselves vegan or agriculture-based don’t have many names to choose from as there aren’t enough publicly listed companies out there, says Roxane Sanguinetti, a quantitative trader at liquidity provider GHCO.

This is a common problem seen among thematic ETFs in general, she notes. “For a ‘vegan’ ETF, you end up with a lot of names that don’t have anything to do with veganism,” she says.

This is the case with Beyond Investing’s US Vegan Climate ETF (VEGN), launched in 2019. Its biggest weights are tech companies such as Tesla, Microsoft and Apple.

“You end up with investors who believe they’re investing in the theme, but are in reality investing in a combination of momentum or growth stocks, which increases the correlation between thematic ETFs as they tend to use the same names,” says Sanguinetti.

When it comes to the market, it may be a few more years before we see a rise in the number of ETFs focusing on plant-based companies and sustainable food production. Despite recent progress in alternative meat and dairy, mass agriculture remains embedded in the global system, trudging along towards net zero.

Biodiversity lossFrance’s Ossiam is another ETF provider that has taken up the food theme. In February, the firm unveiled the Ossiam Food for Biodiversity Ucits ETF, predominantly