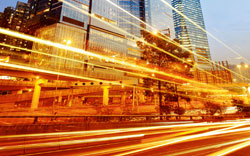 The debt problems in China do not worry all equity managers, and even where this is an issue, Nick Fitzpatrick finds reforms are promoting confidence.

“Unlike many, we are not too worried by the problems confronting China’s real estate markets, the shadow banking system and the related wealth management product issues,” says Robert Rountree, global strategist at Eastspring Investments, summing up the asset manager’s contrarian view of China markets.

The But the problems associated with the China property bubble and shadow banking are exactly what concerns many fund managers (see article, p10-12).

“These [problems] have been around for a long time and have been analysed to death,” Rountree says. But with some Chinese banks trading at price-to-book ratios of close to 0.8 times, investors are discounting a 20% slashing of balance sheets, meaning China is “no honey trap”.

He also notes that China is “attractively valued” with “pricing anomalies abound”. For instance, beneficiaries of economic restructuring, such as consumer discretionary stocks, are being valued at the same low levels as non-beneficiaries, such as capital investment-related sectors.

Rountree adds: “We urge investors not to take their eyes off Japan or China. In the case of China, in particular, when it does rebound, it could be far, fast and furious.”

GROWTH
Mark Mobius, veteran emerging markets investor at Templeton, says: “High economic growth rates will remain a key attraction of many emerging markets. Even with major economies like Brazil and Russia slowing down, overall growth in emerging markets during 2015 is expected to be comfortably in excess of that achieved by developed markets, with China and India likely to drive the Asian region to particularly strong growth.”

“BIG AREAS”
Mobius is attracted to China’s reforms, as is Dale Nicholls, portfolio manager of the Fidelity China Special Situations Fund. He says the ongoing reforms and the transition to a domestic, demand-driven economic model will be “big areas” for investors to focus on in 2015.

“The impact of the reforms cannot be underestimated…  Over time, I expect investors to become less fixated by headline growth figures and refocus on the compelling long-term growth opportunities that are being created by reforms and the shift to a consumer-driven economic model. This backdrop provides a strong tailwind for new China-related companies to continue to grow their earnings and this should be reflected in strong stock performance over time.” 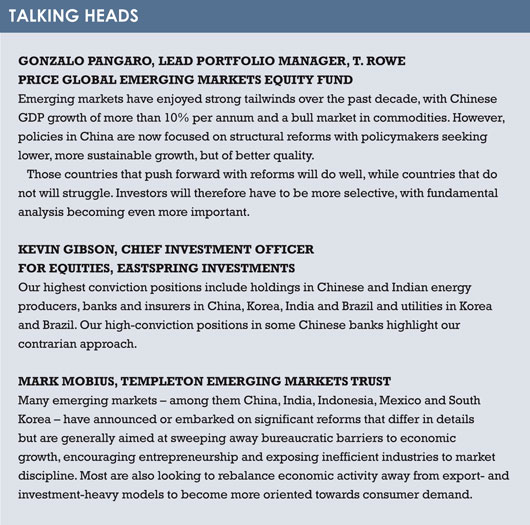 At the end of November, the MSCI China index was trading at 10.1 times on a price-to-earnings basis compared to 13.2 for the wider MSCI Emerging Markets and 18.2 for global equities as measured by the MSCI World index. Nicholls notes that this is despite a number of Chinese companies delivering strong and consistent earnings growth over the past few years.

RATE PLAY
Analysts at Bank of America Merrill Lynch recommended an overweight position in China equities in August. This was a shift from neutral.

BoAML recommends buying brokers and insurers, and, for investors with a high-risk appetite, property firms. This is one way to play the forthcoming “interest rate down cycle”, as these stocks are sensitive to rates.

In November China’s central bank, the People’s Bank of China, cut interest rates for the first time in more than two years.

“The country is on the cusp of debt deflation. The yen/yuan rate already predicts more deflation. While policymakers may not know it yet, and may not want to acknowledge it yet, they are about to surprise themselves by how much they are going to ease to fight oncoming debt deflation,” BoAML analysts write.

Another way to play the looser monetary policy is to buy long-term growers like internet and healthcare firms. Don’t rely on the economic cycle for growth, the analysts say, and buy in the “laggard” H-share market, meaning Chinese companies listed in Hong Kong.