Fear saw emerging markets sold off in January. But the sector’s fundamentals are still strong. Fiona Rintoul reports on what the experts say about emerging market fortunes and hears that concentrating on the Chinese consumer is still a good guide

The radio was playing in the Funds Europe office when news of the most recent market sell-off started to trickle through in January. “What you have to remember is that markets are irrational,” an analyst told a lunchtime BBC news presenter as the carnage unfolded.
Never a truer word was spoken. And nowhere, one could argue, was this irrationality more clearly in view than in the emerging markets. In general, emerging markets have survived the sub-prime crisis better than developed markets. In fact, as the old year crumbled away and the new took hold, the idea that emerging markets are risky while developed markets are safe was starting to look a little old-fashioned.

“The fundamentals in emerging markets are robust in their own right, and are often sounder than those in the developed world,” says Christian Deseglise, global head of emerging markets at HSBC Investments. “The latest IMF World Economic Outlook report shows emerging markets boast lower budget deficits and lower debt-to-GDP levels than the developed markets.”
Just the same, when the biggest dip since 11 September 2001 took hold, the emerging markets were punished along with everyone else (see chart), even though they weren’t necessarily infected with the same sub-prime virus.
“The downturn was caused by US problems,” comments Wim-Hein Pals, manager of the Robeco Emerging Markets Equity Fund, “problems that stemmed from US financial services companies. But they have been spreading across the globe, which in some cases doesn’t make sense, because markets like India for example don’t have these problems.”

In the emerging markets, the 21 January crash was more like a mass rush for the panic button by frightened lemmings than cold and rational investor sentiment. Oh well. The good thing about irrationality is that you can come to your senses. The world hasn’t changed so much that markets such as China and India can shrug off calamity in the US, so the emerging markets have been temporarily dragged down by problems with which they have little connection. But surely they will rise again if the fundamentals are strong?

The significance of the US
If they do, it will herald the beginning of a new global market paradigm – one where the US doesn’t matter so much anymore. “Decoupling; re-coupling; uncoupling…? Financial analysts are struggling to determine the term that will characterise 2008,” says Deseglise. “At stake is the nature of the relationship between the US and rest of the world, and the relevance of the old adage: ‘When the US sneezes, the rest of the world catches a cold’.”

That the fundamentals in emerging markets are strong is clear. “The economies will experience GDP deceleration, but the figures are still very rosy for the likes of China and India,” says Pals. “Even more developed emerging markets such as South Korea can expect 6% this year. These are shining numbers if you compare them with the US, Europe and the dismal GDP growth in Japan.”

And it’s not just that the economies are doing well. Writing prior to the downturn, emerging markets guru Mark Mobius, portfolio manager of Templeton Global Emerging Markets Fund, enumerated a list of positives, aside from economic fundamentals, that would mitigate in favour of emerging markets in 2008. These included: the privatisation and deregulation of key industries; appropriate fiscal and monetary policies; stable political environments; improving corporate governance; the removal of subsidies and trade barriers enhancing competition; higher productivity because of a younger and better trained labour force; and, a growing consumer base.

Then there’s the commodities story. “I could imagine that the whole issue of commodities, at least oil, will hold up well in 2008,” says Angelika Millendorfer, head of the emerging markets equities team at Raiffeisen Capital Management (RCM). “We believe in the long-term growth of the oil price, which is favouring countries that are exposed to that.”

Another important commodity story is steel. “China and India are going to need a lot of steel going forward,” says Pals. “Brazil is the country that has it. The largest iron ore company in the world is based in Brazil. A big proportion of our fund is invested in commodities.”

‘New’ commodities, such as water, are also becoming an important theme, though it’s a theme that can be hard to play. “I don’t see any stock where you could play that,” says Millendorfer. “There isn’t any stock that’s significant.” That’s something that may change going forward. “Invest in commodities, energy, food, water, air, and health and health care,” was one of the recommendations contained in the report ‘Scarcity in abundance’, produced by Iris, the independent research institute owned by Robeco and Rabobank, and commissioned by Robeco. The report deals with the sectors in which population growth and increasing global wealth are leading to scarcities, and with the consequences of such scarcities on our economy. 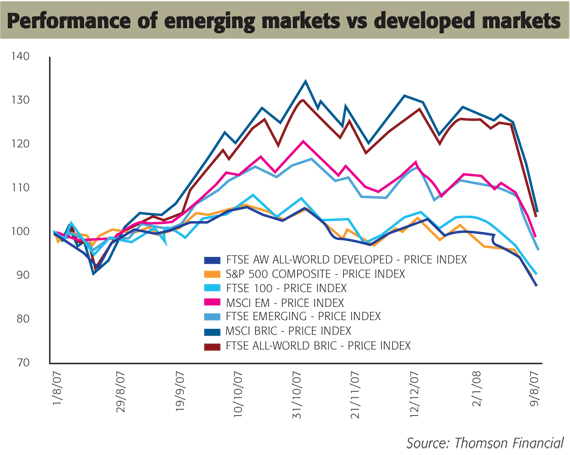 Meeting demand
Consumers in both the developed and the emerging markets have new needs and new companies are sure to emerge to meet those needs. But it is in the emerging markets that consumption habits are changing most rapidly. This isn’t just a matter of more people in China or India wanting fridges, mobile phones or cars – changing consumption habits also affect fundamentals such as water.

Pals agrees with Millendorfer that water is a hard theme to play. But it’s also an interesting theme, he says, with countries such as India and China requiring ever more water, not just for drinking, but also for irrigation.
“They have to grow crops to feed a population that is eating more Western-style food,” Pals says. “Pork prices, milk prices, egg prices are all rising. They need to grow their own food ingredients. That’s why we’re very enthusiastic about agricultural stocks. In India and China they are feeding a local population which is growing and spending more and eating different kinds of food. That middle-class theme is an integral part of our portfolio.”

From a government perspective there’s another compelling reason to promote local agricultural producers: food prices are driving up inflation in markets such as China and India.  “Inflation is not an issue outside of food,” says Pals. “It’s purely food inflation.”

Inflation is one of the inherent risks in these markets. Another is overheating. “If you look at high-growth economies like China and India, they want to cool down the economy,” says Millendorfer.

In the European emerging markets, things are slightly different. “We see Central and Eastern Europe as risky, particularly Poland, Hungary and the Czech Republic,” says Pals. “From an economic perspective they are not as healthy as Latin America. They have twin deficits, which puts the currency and long-term development at risk.”
Just the same, Millendorfer predicts strong GDP growth in these markets and says that “after a really steep correction” CEE stocks are looking quite cheap. “In Eastern Europe we still have a growth forecast of 5%,” she says. “But at this point it’s just a forecast.”

“One concern for emerging markets is the likely impact of slower US consumer spending on their exports if the US economy slows dramatically,” he said. “While dependence on the US as an export outlet has been decreasing in emerging markets, they may not be completely shielded in the event of a major slowdown in the US economy.”

Power shift
In an alternative, and perhaps more likely, scenario of mild recession or a prolonged slowdown in the US, the emerging markets would fare better. “Decoupling theories would probably continue to play if the US continued to grow slowly or were to go through a short and mild recession,” says Deseglise.

The experts are cautiously upbeat. “Overall, I’m optimistic,” says Millendorfer. “After the slump, valuations are again at attractive levels.”

Pals points out that the Fed rate cut could mean a less severe slowdown in the US and that valuations are now at “fair value” having been too high in August 2007. In any case, he says, although a severe US recession will hurt the export part of the emerging market economies, we are moving away from a world where a good rule of thumb for investors was to buy what the US buys into a world where it makes more sense to buy what China buys.

Perhaps the biggest story in 2008 will be this shift in global market power. The emerging markets are coming out of the footlights into the limelight.

“The newly acquired financial muscle of emerging markets is making daily headlines and the power of emerging market sovereign wealth funds is likely to be increasingly felt in the coming year,” says Deseglise. “In many respects, emerging countries are moving centre stage in the world economy.”