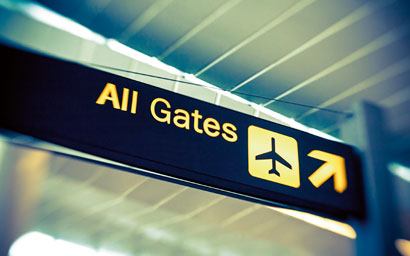 With the RDR, and potentially under MiFID II, fund managers in Europe face a proliferation of share classes. Nick Fitzpatrick examines the operational challenges that stem from this.

The share class of a fund is like a boarding pass for an airline passenger. Institutional investors go one way and find fully reclining seats and a waiting glass of champagne; retail investors go the other way, to economy, and wait for the drinks trolley.

Just as an airline would not have to print off another boarding pass to upgrade an economy passenger, a fund manager would not have to create a new share class to ‘upgrade’ a retail investor through the form of a fee rebate, obtained by the financial adviser or a fund platform.

But obtaining a better price for a fund in countries where rebates have ended, such as in the UK under the Retail Distribution Review (RDR), now means setting up a new share class – and for the UK, this could cost fund managers £20,000 (€27,500) for each share class created.

That figure comes from Stephen Mohan, head of UK and Ireland at Allfunds Bank, a fund platform. He anticipates the creation of thousands of new share classes as a result of ending rebates – a trend set to sweep Europe, principally under MiFID II.

“If the fund manager wants to offer a better price for a distributor, they now have to create a ‘super’ clean share class, and that costs them money. Anecdotally, the cost of creating a new share class is £20,000,”
he says.

The deluge of share classes will be more of a burden for some than others. Henderson Global Investors created 15 new share classes for its post-RDR business in the UK. The existence of institutional share classes meant it already had some share classes fit for purpose, says Ian Dyble, head of product development.

Yet at Kneip, a Luxembourg-based regulatory reporting provider, 400 share classes had to be created for many of its clients’ UK fund ranges, says Lee Godfrey, deputy chief executive.

That said, the principle still holds that individual fund management firms will have to create more ‘clean’ share classes as the rebate bans spread. Holland and Switzerland are two other countries in Europe where rebates are to an extent banned, and in December last year, Brazil took similar action.

A principal danger – and a prime case of unintended consequences, perhaps – is that fund managers could find themselves provoking the ire of customers for bank-style uneven charging.

What happens when some investors are paying 75 basis points and a newly created share class charges 65? If older investors are not moved into the new share class, then, says Mohan: “It’s like when mortgage providers offer better deals to new customers but not their existing ones.”

With the move towards ever-lower pricing as fund managers face competition from cheaper exchange-traded funds, it could cause a lot of problems, he says.

DIFFERENT CLASS
“But it’s just a matter of creating another share class, right? Big deal,” you may say.

Beyond the problem of bank-style charging, there are  operational vexations.

“So you start rolling up quite a lot of information at the share class level and it almost becomes like a mini-fund in itself,” says Marty Dobbins, country head of State Street in Luxembourg.

Keith Hale, executive vice-president, client and business development at Multifonds, also in Luxembourg, says: “Each share class has its own Nav [net asset value], based on its commission and fees structure, which are often valued daily.

“A separate Nav requires all the accounting functions including ‘capstock’, trade capture, reconciliations, expenses, valuation and tax processing to be processed for every share class, with the associated operational effort. The trick is to process each Nav and share class as efficiently as possible.”

Godfrey at Kneip adds: “Where fund managers have a legal obligation to publish their share classes, it means the new share classes have to be added to Morningstar, Bloomberg and Lipper. Together with key investor information documents (KIIDs), filings, updated written notices, it does mean a cost burden.”

Dyble, at Henderson Global Investors, says 10 share classes can be reached for one fund just by meeting ordinary marketing demand. On Henderson’s UK and Luxembourg Ucits fund range, there are 116 sub-funds and 616 share classes – so about six per fund on average, he says.

Henderson is to launch a renminbi share class for its Henderson Horizon Fund, a Luxembourg Sicav, Dyble says. It has also launched rebate-free share classes in Holland.

According to Dyble, Henderson has negotiated a tariff for each new share class it launches.

DISTRIBUTION EFFICIENCIES
Despite its complexities, the share class brings cost and operational efficiencies to the fund management business and it is a powerful, flexible tool for fund managers looking to broaden distribution.

Greg Jones, Henderson’s head of Europe, Middle East and Africa retail and Latin America, says a year and a half ago, Henderson created clean share classes for global banks.

Over the past three years, as Henderson globalised and put more investment capability in other countries and regions – such as US teams for high yield and growth equities – the company has launched more Sicav fund structures.

Asset managers from countries where the share class is not a concept will learn about share class strengths and challenges as they expand. A good example is Brazil’s BTG Pactual.

Ricardo Kaufmann, partner of BTG Pactual and head of international distribution of BTG Pactual Asset Management, says: “At present in Brazil, there are no share classes. Instead you would find a fund for institutions and another for retail. Each fund would have its own price. It is better to have different share classes rather than different funds. Share classes are aligned with client needs.”

BTG Pactual is a bank and wealth management group. Its asset management business has the equivalent of €61 billion of assets under management globally, including in Europe, where it runs Latin American funds with retail and institutional share classes, and a dividend-paying share class for retail investors in its corporate debt fund. The business – the largest asset manager in Brazil without a retail network – is expecting to launch a clean share class.

Kaufmann says: “There has been a lot of internal discussion here about whether we should offer a clean share class. We will make the decision this quarter, but we do feel a need to do it. I recognise that if we do not have a clean share class then there are a lot of markets in Europe where we will not be able to offer our funds.” 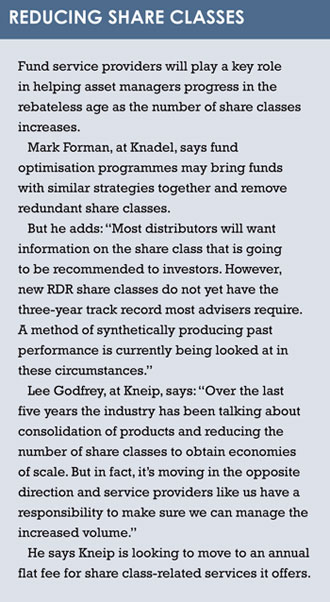 Many European managers are highly interested in Brazil – but if they think distribution can still be bought, it’s worth pointing out that the rebateless model is spreading to Brazil.

In December 2014, the Brazilian Securities and Exchange Commission said it would end rebate fees within investment funds that invest in quotas of other investment funds, with some exceptions. “The aims of the Brazilian regulator are aligned with the clean share class model in Europe,” says Kaufmann.

Mark Forman, retail and distribution practice leader at Knadel, a consultancy, says that as the use for new business recedes, the cost of an unclosed share class will have a deleterious effect on either the manager or investor, depending on where a fund’s prospectus directs the cost to be taken.

“Where fund managers have purchased back books of business from various sources and there is duplication of strategies across both ranges,  a high degree of confusion and propensity to treat customers differently – potentially not fairly – ensues. The situation only gets muddied further when there are many different share classes, too,” says Forman.

Surely it’s just a matter of closing a share class down, isn’t it?

“That could be the case, but it’s not usually that straightforward to take everyone out of one share class and drop them into another,” Forman says. “The prospectus is a legal contract and changes to the structure of funds are governed by strict rules overseen by the FCA [Financial Conduct Authority].”

Some investors may need to stay in a fund for a specific period of time and there’s no way of guaranteeing that moving them out will be fair.

Mohan, at Allfunds Bank, has proposed the “zero-percent share class”. The distributor would pay the manager 75 basis points “in the same way as shops pay Heinz for beans”. The price would come down for distributors who provided volume sales.

“The price could literally be changed daily – based on the manager’s commercial decisions – without the need for end investors to hold or change multiple share classes,” he says.

Fund managers could bring their prices down gently in a way that would not increase administration costs, because they would not be maintaining lots of different share classes.

Whatever the case, Mohan warns that a solution needs to be found, and implies that funds could suffer if no solution is forthcoming.

“There is a very real cost to end investors in the creation and administration of so many different funds and share classes,” he says.

“Meanwhile, rather than provide valuable transparency, it actually just generates incomprehensible data to those investors.

“They will probably feel it is better to go for something that is simpler, even if it turns out to be less good.”