Since the market bottom of the Great Financial Crisis in March 2009, the Russell 1000 Growth Index (R1G) has outperformed the Russell 1000 Value Index (R1V) by over 300% cumulatively. This level of relative outperformance is reminiscent of the 1990s, along with the angst and frustration it seems to manifest for investors who allocate between the two styles.

In fact, the cumulative outperformance of the R1G vs. the R1V during the 11 years from 2008-2019 was roughly the same as it was from 1988-1999. Many seem fearful that this current era of growth style dominance will end with the same thud as its 1990s predecessor.

We make no claims about the future and acknowledge this paper could be poorly timed. Yet, despite the appearance of style déjà vu, we think the factors that have driven the current outperformance of growth vs. value are different than the previous incarnation.

Valuation vs. Earnings Growth
Current P/E levels relative to the 90s combined with a low interest rate environment, in our opinion, indicates that earnings growth has been a more significant driver of the recent outperformance of the Growth index. In just the two calendar years of 1998-1999, the R1G outperformed its value counterpart by a cumulative 60%. This outperformance was valuation driven—the relative P/E of the R1G, at its peak, reached 3.5x the P/E ratio of the R1V, a level far above the longer-term trend. Analyzing 2008-2019, the relative P/E of both the R1G vs. R1V has certainly trended higher (above 1.5 at end 2019) but remains well below the levels seen in late 1999/early 2000. It is also important to note that interest rates today are much lower compared to twenty years ago— if anything, this fact generally justifies higher growth equity valuations.

The Economics of Today’s Growth vs. Value Dynamic
We can also examine the fundamentals behind the growth vs. value dynamic. Consider the accrued economic value (based on revenues and profits) generated by the 10 most significant contributors to each index’s performance. This can help to properly frame the value created by the companies most responsible for the performance of each benchmark.

The Price/Book Ratio is one of the key metrics that FTSE Russell uses to define their growth and value style indices. However, how helpful is it for understanding companies in the digital age? These businesses tend be more reliant on intangible assets (which naturally lends itself to higher P/B ratios) compared to traditional companies. With this type of methodology, digital, asset-light businesses will usually be classified in the growth indices even though, in our opinion, some of the world’s largest digital businesses currently trade at very reasonable prices relative to their earnings power (as opposed to their book value).

If overall revenue and net income generation and the growth of these metrics are an indicator of underlying business strength, then the companies driving the R1G’s performance collectively appear to be much stronger than those driving the R1V’s performance. In this context, the comparative outperformance of the R1G seems hardly surprising. The top contributors to the R1G’s performance saw far more economic value accrue to their businesses relative to their R1V counterparts. In our opinion, it would be irrational if the market did not assign a greater value, in the form of larger market caps, to these best-performing growth businesses. 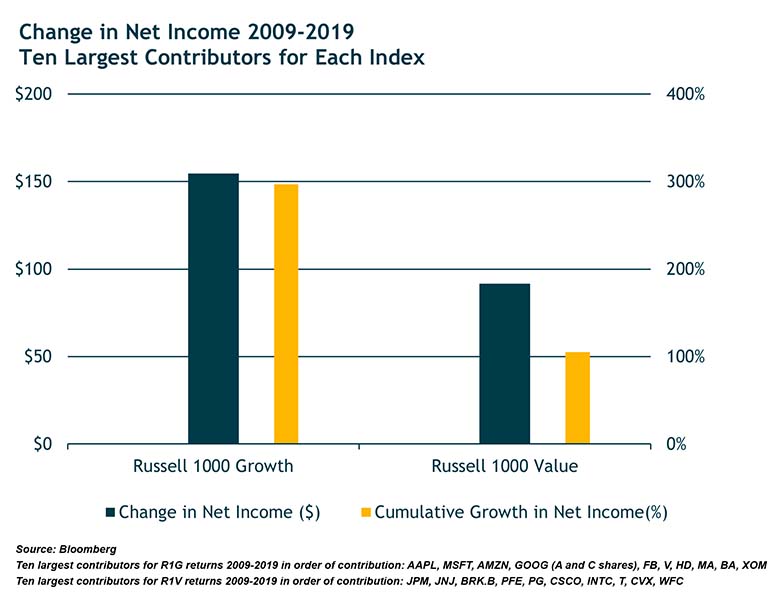 The main takeaway from this analysis is that the current growth vs. value cycle appears to be more fundamentally driven than the 1990s when the cycle. morphed into a valuation-driven mania that, even then, seemed unsustainable. If we conclude that today’s cycle is more fundamentally driven, it may prove to be more sustainable than its 1990s predecessor. Only time will tell, but the companies who make up the most significant contributors to the R1G, led by the massive tech platforms, are seeing their business models driven forward by enormous structural trends around the digitization of the global economy, a shift that is perhaps still in the early innings.

Somewhat ironically, today’s digital transformation was significantly accelerated by the internet and mobility trends that had blossomed during the 1990s. In a sense, that era’s excitement about the momentous changes these technologies would create was more than justified—the stock market was simply too far ahead of many of the actual business models. These models required a level of infrastructure (computing power and storage, mobility networks, data speeds, etc.) which was, arguably, inadequate at the time. Today, with much of that needed infrastructure in place, the full promise of the internet boom is now being realized.

Many digital platforms are now the largest companies in the U.S. growth indices, and, in our view, they are some of the more powerful business models we have seen in the 30+ year history of our firm. When viewed through this lens, the outperformance of growth vs. value for the past ten years is not only unsurprising but may continue, as long as its fundamental underpinnings remain in place. We recognize why today’s growth cycle might create some uneasiness, especially when it feels eerily similar to the 11-year growth cycle of the past. Yet, the fundamentals tell us that today’s growth cycle is largely being supported by earnings growth, the stronger underlying economics of the businesses, and the full realization of digitization’s promise, which we believe has many more years ahead.

For discussion purposes only: The information and data contained in this document does not in any way constitute an offer or recommendation or advice to buy or sell financial instruments.