Companies cannot thrive without healthy and happy employees, consumers, and communities. Investors must use their influence with companies and other stakeholders to ensure the basic rights of these groups are respected.

In the grand pursuit of profit, companies have not always prioritised the rights and wellbeing of people. Meanwhile, others have failed in their due diligence, closing their eyes to what might happen across their supply chains.

“Human rights are the foundation of business,” says Vaidehee Sachdev, people pillar lead and impact analyst in the sustainable outcomes team at Aviva Investors, leading the firm’s research and engagement on social issues. “A company’s approach to human rights tells us something powerful about the way it interacts with people.”

Investors cannot close their eyes to these issues, either. The consequences of human rights failures are complex and finding solutions to them will require the full participation of all stakeholders. By holding companies to account for poor practices and directing capital to strong-performing businesses who value human rights, investors have a big role to play.

In this article, we look at the interdependencies between people and businesses, discuss what companies and investors can do to respect and protect human rights, and explore the crucial role of regulation.

Human rights and the ‘S’ in ESG
Communities have been destroyed and lives lost from catastrophes brought on by bad governance and cutting corners. Tragic examples of the consequences include the Vale dam collapse in Brazil in 2019, which killed 270 people, and the Union Carbide factory explosion in Bhopal, India in 1984, which exposed over 500,000 people to the toxic methyl isocyanate gas, causing immediate deaths and thousands of health issues people still suffer from.1,2

According to the International Labour Organisation, at any given time 25 million people around the world are trapped in forced labour; one in four victims of modern slavery are children.3

Civil society organisation KnowTheChain aims to help companies and investors understand and address forced labour risks within their supply chains. To that end, it benchmarks 180 of the largest companies across three sectors at high risk of forced labour – information and communication technology, food and beverage, and apparel and footwear.4

“So far, there has always been one company that scores zero,” says Felicitas Weber, project director at KnowTheChain. “If not even the largest global companies in high-risk sectors take action on some of the worst forms of exploitation, you can only imagine what that looks like at companies not in the spotlight.”

“There are a hundred ways to slice and dice social responsibility, but human rights are the overarching concept,” says Marte Borhaug, global head of sustainable outcomes at Aviva Investors. “Everyone will have a slightly different definition, but if you go back to the roots of human rights, they encompass all the social issues we talk about when we say the S in ESG.”

Why should investors care?
Companies interact with people at four different levels, all of which present distinct risks and opportunities, but respecting human rights, offering fair working conditions and pay, and adopting responsible behaviours should form the basis of every company’s approach.

“Companies across all sectors need to adopt those three core tenets if we are to see an economy-wide transition,” says Sachdev. “We must ensure people, communities and societies are more resilient and capable of withstanding the transformation needed to align with other major issues like climate change and biodiversity loss.”

That said, the approaches companies need to implement or improve will be different across sectors.

“Tech companies such as Facebook and Twitter's human rights impact will be focused on their customers and how they manage content and protect their freedom of speech,” says Borhaug. “In contrast, their direct employees tend to be highly skilled, highly paid, and therefore less likely to suffer from poor working conditions. A mining company, on the other hand, will have the biggest human rights impact on local communities on whose land it operates, and on its large and often low-paid workoforce.”

Figure 1: How a company manages its social footprint brings risk and opportunity 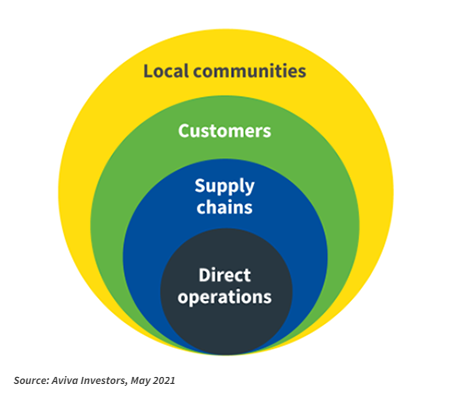 At the employee level, many HR professionals will be familiar with key risks around low wages, precarious contracts, discrimination and harassment, health and safety, and overly long hours, not to mention modern slavery (which includes forced labour, debt bondage and human trafficking).

Modern slavery is a key risk at the supply-chain level, rendered all the more difficult to find and eradicate by the layers of suppliers across multiple countries in some companies’ supply chains.

“From a human rights perspective, a lot of the issues are in the supply chain. There may be some issues with companies directly – for example, when Tesco got called out for systemic underpayment of workers over several years – but that is rare compared to the huge amount of child and forced labour and labour exploitation in the apparel and food sectors,” says Dan Neale, social transformation lead at the World Benchmarking Alliance (WBA), an organisation set up to rank 2,000 global companies on their contribution towards delivering the Sustainable Development Goals.5

He explains the issue lies in connecting companies to those real-world impacts. While the UN Guiding Principles on Business and Human Rights state businesses have a responsibility to respect human rights, extending into their whole value chain, their level of responsibility to prevent and remedy a specific issue depends on their relationship to it (i.e. whether they are causing, contributing or directly linked to an impact, and the leverage they have). Opaque supply chains can allow companies to deny any linkage, while other companies may argue they do not ‘contribute’ to an issue, so deny responsibility to take meaningful action.

Neale points to the tragic collapse of the Rana Plaza garment factory in Bangladesh in 2013 as a critical case study. Over 1,110 people died in the incident, many of them workers sewing clothes for big brands such as Primark, Benetton, and Walmart.6

“The Rana Plaza case was a seminal point,” says Neale. “None of the big brands we talk about owned that factory, none of them directly employed anybody there, but they were a massive part of the problem. If a firm decides to relocate everything from India to Bangladesh on the basis of two cents an hour, that tells you exactly what its priorities are. And if ‘chasing the needle’ and driving down costs incentivises cutting corners on safety, companies are surely contributing to the issue, not just linked to it.”

Weber agrees that situations where firms abuse the vulnerability of workers are often linked to discrimination (on the base of gender, race or migration status), and to the lack of labour protection laws or their enforcement, as well as demand factors.7