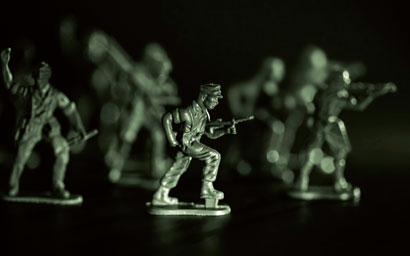 Donald Trump’s victory has fund managers gripping their seats. The only question is ‘what next?’ Fiona Rintoul asks fund managers for their thoughts.

Odious. A nut job. This is not the vocabulary normally applied by fund managers to the president of the United States. However, that is how some are describing Donald Trump and his pre-election pronouncements, both on and off the record. It’s fair to conclude that this is not a normal situation. But life goes on – and so does investment.

“It was going to be the end of the world if Trump won,” says Ian Heslop, head of global equities at Old Mutual Asset Management. “At the moment, we’re seeing a reaction to the fact that policy is very uncertain.”

“I must really emphasise that the uncertainty at the moment is of a different magnitude then in previous periods,” Daalder says.

Few would dispute this. One of the biggest guessing games at the moment is working out which of Trump’s pre-election pronouncements will become reality. Will he jail Hillary Clinton? Will he build a wall on the Mexican border? More prosaically, will he slash corporate tax from 35% to 15%, as he promised to do? No one knows.

Of course, no one ever knows exactly what the president-elect will do when he comes to office – or what he will be able to do, given the checks and balances built into the US system of government. That system is a source of comfort now.

“I hope first of all that as Trump has no political experience, he will rely on a team of experts,” says Monica Defend, global head of asset allocation at Pioneer Investments. “I also hope that Congress will remove from the more extreme positions he pledged during the campaign.”

The outlandishness of some of those positions and Trump’s uneasy relationship with his own party mean this presidency isn’t just unexpected; it is for the moment troublingly opaque. If nothing else, this serves to highlight one particular rule of thumb in investment: trying to make political calls is futile.

“We don’t make binary calls,” says Heslop, “because you need to get that call right and you need to assess the impact correctly. Measuring how the market behaves is the best way of assessing the situation.”

At Pioneer Investments too, they usually don’t play elections. They prefer to work with facts.

“With Trump as president, we have an unchanged forecast for the time being,” says Defend. “We can’t change the forecasts because nothing material has been done so far.”

But in a world where investment analysts increasingly have to be political analysts too, it’s impossible not to speculate about what the Trump presidency will mean for investments. At this stage, most investment analysts are prepared to assume that some of the president-elect’s more colourful plans will not come to pass and to focus on the nitty-gritty of his economic plans and what they will mean. Thus far, the hallmarks of the president-elect’s economic plans are tax cuts, infrastructure spending, less regulation and trade barriers.

The less regulation part of the equation led financial stocks to rally in the wake of the election. Other sectors that could benefit from the new president’s approach to regulation are the coal industry, which he promised to save, though it’s unclear how he will do this.

WELCOME PLANS
Trump’s planned combination of tax cuts and infrastructure spending is designed to stimulate growth, and Simon Laing, head of US equities at Invesco Perpetual, believes it will. As well as welcoming the massive planned corporate tax cut, Laing approves of plans to simplify tax codes.

“If he can pass his tax plans by the spring, then you’re looking at improvements in the second half of 2017,” he says. “If he can get growth to 3%, that would be a good result, but even growth of around 2% is still growth. A lot of companies are learning to live in that environment.”

The question mark over this agenda – for Laing and for others – is whether the Republican Party, which still has many fiscal conservatives, will go along with it.

“There are people who think the Republican Party will allow spending, but I don’t think the party will go alongside the idea of cutting taxes and increasing fiscal spend,” says Laing.

Daalder puts it another way. Listening to Trump’s statements, he doesn’t hear much interest in a balanced budget. Trump doesn’t seem to care about debt – and this indifference is reflected in the way he ran his own companies.

“But he’s not CEO of the US,” says Daalder. “There is a democracy, and the Republicans are not keen on letting debt get out of hand.”

At the same time, Trump has to deliver growth and domestic jobs to keep his core voter base of blue-collar workers happy. It’s very much a case of wait and see, but this means there is likely to be some spending, even if the president-elect’s grandiose plans are not entirely fulfilled. Accordingly, Pioneer Investments has increased its growth forecast for 2017 for the US from 2.3% to 2.8%.

It’s hardly razzmatazz, but it’s something – though the longer-term growth outlook may be less rosy. As a growth stimulus, tax cuts provide a one-off hit, warns Daalder.

On the bond side, the planned infrastructure spending that will contribute to this growth will be a negative, as it will increase the debt burden. There is also the prospect of inflation coming back and interest rates rising.

“If you look at the things Trump said during the campaign, there’s not much good news for bonds,” says Daalder.

However, it may depend where in the bond market you look. “As the Trump factor is taken into account, it should favour corporate bonds and index-linked bonds,” says Defend.

ANTI-GLOBALISATION
But perhaps the biggest spectre hanging over the global markets in the wake of the US presidential election is the president-elect’s views on trade and globalisation. If he were to implement some of the protectionist policies mooted in the campaign, that could seriously impact global growth – though Laing points out that some policies, such as renegotiating NAFTA, featured on Obama’s agenda too.

“There are a few things that the president can do that don’t require congressional approval,” says Laing. “What worries me is that he starts to tamper in trade more than we might think.”

Given how much the president-elect will have to work with Congress on other issues, Laing considers a massively heavy-handed approach to be unlikely. However, there’s no doubt that investors are jittery about what the president might do in this area.

“We are concerned about foreign policy,” says Defend. “We moved back to neutral exposure to emerging markets before the election.”

Alongside a strengthening dollar, the erection of trade barriers – were it to come to pass – certainly could cripple emerging economies that rely on exports in the short term. In the longer term, Defend highlights these economies’ growing internal strength.

Already long ‘new China’, Pioneer Investments is waiting for better opportunities to enter back into other emerging markets. “Maybe not today, but in five years you could see them being domestically dominated.”

LOSERS AS WELL AS WINNERS
Just as well, perhaps. For the truly worrying aspect of Donald Trump’s election as president of the United States is not the unsettling pronouncements he made during the campaign; it is the deep-seated dissatisfaction with the status quo that the US electorate’s choice of president reveals.

“We have lost sight of the fact that there are losers as well as winners in global trade,” says Heslop. “Light has been shone on that in the last year. That will have an impact on global growth, especially if we see tit-for-tat protectionism.”

This is the issue that now needs to be addressed – though how to do that is harder to identify. “Do we really believe every plastic toy sold in America will be made in America?” asks Heslop.

Elections coming up in France, Germany and the Netherlands next year will be another opportunity for populist parties to make electoral gains.

“In the best case, it’s noise,” says Defend. “What we need to do is have each event happen, then understand how to manage it.“We need to manage uncertainty, not bet on it.”