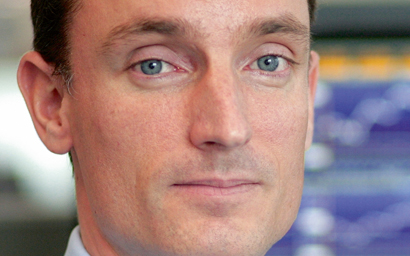 The new chief executive of Mashreq Capital talks to George Mitton about fund launches, management style and why he is the right person for the job.

In June, Abdul Kadir Hussain stepped down as chief executive of Mashreq Capital after a decade in the post. He was one of the longest-serving asset management chiefs in Dubai and a familiar face at events and conferences in the region.

His successor, Aamir Peracha, has a claim to the opposite honour: he spent roughly a month in the job before leaving, a term that may well qualify as the shortest in charge of a Dubai-based asset manager.*

Christophe Pella, who took on the role in August, says he will have more sticking power. Unlike Peracha, whose experience was mainly on the sell-side – before taking the role, Peracha was head of equities and derivatives at Mashreq’s banking division – Pella is a long-term buy-side man, with experience of managing teams at State Street Global Advisors and Legal & General Investment Management in London.

“I’ve worked only on the buy-side from the start of my career nearly 19 years ago,” he says. “It’s something I know inside-out.”

SCHEMES
Pella believes his experience equips him for the chief executive role in a way his predecessor’s skills seemingly did not. That role requires overseeing the firm’s equity and fixed income managers, who together manage roughly $1.5 billion (€1.4 billion) of assets. It also means seeking to increase the firm’s product range to capture more inflows. “One big strategic change I am making is extending the range of products,” he says.

Clients have expressed interest in money market funds, he adds. Another area could be balanced funds, to allow clients to outsource their tactical asset allocation decisions to fund managers. The firm also plans to unveil a UAE-focused real estate fund managed in partnership with Abu Dhabi-based investment firm Arady. The fund launch, planned in the coming months, “will start the extension of our product range”, says Pella.

The Ezdihar Real Estate Investment Fund will be a qualified investors fund, a fund category set up by the Dubai International Financial Centre (DIFC) in 2014 and aimed at professional investors. A maximum of 50 investors may invest by private placement in the fund, which will acquire retail, residential, commercial and hospitality property in the UAE with the possibility to invest in other Gulf countries “on an opportunistic basis”.

The companies aim to raise $300 million for the fund and target a maximum loan-to-value ratio of 60% for the portfolio.

PROFESSIONAL
As well as launching funds, Pella aims to instigate some new practices. He says he will impose “a more rigorous, top-down investment process”, which includes risk budgeting on portfolio trades and quantitative modelling to help investment managers analyse their decisions. In terms of manager style, Pella says he is opposed to the “star manager” concept and will instead insist on building strong teams. “We will have a small, dedicated, highly competent team that can manage portfolios with a rigorous approach regardless of whether a team member is away on business or holiday,” he says.

He does not plan a radical shake-up of personnel, however, praising the existing investment managers at Mashreq Capital, who are a mix of expatriates with international experience, and long-term Dubai residents, some of whom began at the firm as analysts and have worked their way up to portfolio managers.

MACRO
Pella accepts that he is joining the firm at a difficult time. The sustained low oil price has caused a number of the region’s large investors, such as sovereign wealth funds, to withdraw money from external managers to help meet government shortfalls. The same factors have slowed economic growth in the region and caused some decidedly rocky performance on regional stock exchanges.

Pella’s prognosis is for “positive yet lacklustre” growth in the region. He takes comfort in the belief that the stock markets have already priced in the consequences of cheap oil so that “what lies ahead are the structural reforms”.

These may include large privatisations in Saudi Arabia, for instance, which may create new buying opportunities for equity managers.

Other structural reforms include the cutting of subsidies and the onset of taxes such as value-added tax, which will be implemented in the UAE on January 1, 2018.

“The fall of the oil price has highlighted the need for a diversified economy,” he says. “Dubai is well ahead in that direction and it’s great to see other countries and regions start structural reforms that will help create a diversified base of economic activity in the GCC.”

HISTORY
Pella, a French-speaking Swiss national, has worked with Gulf-based clients ever since he began his asset management career in Geneva, when he worked in the asset management department of private banks, most notably HSBC Private Bank. At 30, he took a career break to study for an MBA and, on finishing, took a job in institutional asset management in Zurich. When his company was bought by the French insurer Axa, Pella chose to quit and move to London rather than relocate to Paris.

He is optimistic about building a new life in Dubai and bullish about the prospects for Mashreq Capital, which, he says, has an enviable client list and a strong reputation. The DIFC-based firm enjoys good support from its parent bank, which was founded in 1967 and is said to be the oldest privately owned bank in the country. The bank was named after an Arabic word meaning ‘place of sunrise’, a term that refers to the part of the Arab world east of Egypt.

The challenge, however, will be to expand Mashreq Capital’s investors base outside the immediate region. Pella says he wants to get investment flows from Europe, the US and Asia, and to build the company’s reputation as an active manager of choice for international allocators looking to invest in the MENA region. However, he was not able to articulate a marketing strategy that might achieve this.

It is early days, of course. There is time for more planning in future. Pella has at least achieved one thing so far – he has outlasted his predecessor.

*Aamir Peracha spent 19 years at Mashreq, mostly in its equity business on the sell side covering brokerage, private equity, structured products and derivative based transactions. Prior to leading Mashreq Capital, he was managing director, equities and derivatives.