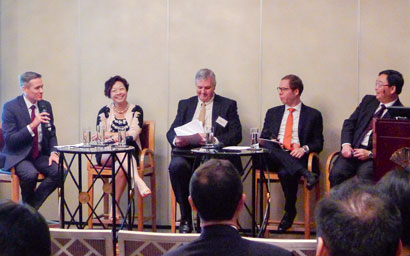 The Mutual Recognition of Funds scheme was a hot topic of discussion at an asset management briefing in Hong Kong. Alan Chalmers reports.

Hong Kong is a financial hub and a gateway to China. Its role has only grown as China has opened up its capital markets with a series of access schemes, such as the Mutual Recognition of Funds programme between Hong Kong and the mainland. The much-discussed scheme allows eligible Hong Kong-domiciled funds to be sold in the mainland. China-domiciled funds enjoy the same treatment in Hong Kong.

However, despite much enthusiasm surrounding the scheme, the small number of approvals, particularly of Hong Kong-domiciled funds, has disappointed many in the industry. This was one of the main topics of discussion at a conference held in Hong Kong in November and organised by financial infrastructure company Clearstream.

The speakers were agreed on one point: mutual fund recognition – alongside the other China access schemes such as Stock Connect – has great potential. But more support from regulators may be needed to make the scheme a success.

COLD MONEY
The conference began with an introduction from Esmond Lee, a former executive director of the Hong Kong Monetary Authority who now serves as a senior adviser to the Hong Kong Financial Service Board.

Lee emphasised the stability of both Hong Kong as a financial centre and of its currency, the Hong Kong dollar. Although many people believe Hong Kong is a beneficiary of hot money, he argues the opposite. It is “cold money” that comes to Hong Kong because most of the invested money stays there, he says.

Lee also remarked that while Hong Kong represents a small pool of money, its neighbour, China, represents an ocean of money, which makes Hong Kong an attractive investment centre. He was upbeat. China’s mainland markets are opening thanks to Stock Connect, which links the stock exchanges of Shanghai and now Shenzhen with Hong Kong. The industry now anticipates new initiatives such as Bond Connect, he added.

FABULOUS FINTECH
Bernard Tancré, head of business solutions, investment fund services at Clearstream, gave a presentation of the issues affecting the industry. He said mutual fund recognition is still in its early stages, with relatively few funds approved for sale. This will be a long-term project.

He was optimistic about exchange-traded funds (ETFs) and alternative funds, both of which are seeing growth. He also discussed financial technology, or fintech, which is expected to grow at a rapid pace. Fintech is likely to focus on post-trade digitisation, artificial intelligence, investment technology, such as robo-advisers, and alternative funding platforms such as peer-to-peer lending, he said.

SCEPTICAL VIEW
A panel discussed some of the issues raised by the earlier speakers. Stewart Aldcroft, managing director, Citi Markets and Securities Services, expressed frustration at the slow pace at which mutual fund recognition had been implemented.

“Unfortunately, to date, mutual fund recognition has been massively disappointing to the Hong Kong fund management industry,” he said.

“Through a combination of regulatory delays, obfuscation, perverse questions and, probably, inexperience, Hong Kong managers have not been able to get their funds approved by the CSRC [China Securities Regulatory Commission] for northbound use, yet there is clear evidence of a pent-up demand in the mainland. More help from the SFC [the Securities and Futures Commission, one of Hong Kong’s regulators] would likely be appreciated by the industry.”

The discussion also covered the development of ETFs in Hong Kong and the outlook for Ucits funds. However, it was mutual fund recognition that elicited the most outspoken debate. Eleanor Wan, chief executive, BEA Union Investment, said fund companies must be patient as the scheme would take time to develop.

“Mutual fund recognition is important to position Hong Kong as an asset management hub,” she said. “Although the current number of Hong Kong funds approved for distribution in China is small, it will potentially be a very big market for Hong Kong funds.

“To be eligible to the scheme, the funds need to be set up and investment conducted in Hong Kong. With the differences in scale and operation model, fund managers need to be cautious on the cost involved. Nevertheless, it is a long-term business plan.”