The United Kingdom’s Authorised Contractual Scheme (ACS) is a U.K. domiciled tax-transparent fund regulated by the Financial Conduct Authority (FCA). Enacted in July 2013, the ACD aligns the U.K. investment funds regime with other European jurisdictions offering tax-transparent funds. The ‘look through’ structure generally recognises tax at investor level, rather than the fund level, enabling investors to access the appropriate tax rate on their investment income. However, the model’s transparency advantages transcend tax outcomes to encompass a suite of fund rationalisation, regulatory and reporting, and distribution benefits.

FUND RATIONALISATION
The ACS’s ‘look through’ structure lets fund managers consolidate multiple funds in a centralised pool of assets, rather than having to set up investment vehicles in each jurisdiction where their target investors reside. Bringing funds across differing markets and investment strategies into a central asset pool also allows clearer oversight and more opportunity for enhance governance. It’s more efficient to manage and monitor one asset pool based in one location.

Moreover, fund rationalisation facilitates economies of scale: managers can achieve savings in areas such as distribution, administration, custody and legal. Via an ACS, asset managers can operate a single fund rather than replicate the same approach across several funds.

REGULATORY AND REPORTING CHALLENGES
Increased transparency is a recurring theme being pushed across the myriad of global regulatory developments. This includes:

By virtue of its tax-transparent structure, the ACS is able to respond to these demands. Under the ACS, it’s possible to see each investor’s pro rata share of assets and dividend allocation. Consolidating funds into the ACS structure also avoids duplicating regulatory processes across a number of fund ranges.

Regulation is also forcing insurers and asset managers to re-evaluate fund structures from a cost and efficiency viewpoint. For example, under Solvency II the use of life companies as a delivery mechanism for investment fund products has become burdensome and weighed down with regulations not specific to their purpose. The ACS, however, is not subject to Solvency II. Its ‘look through’ structure and the change of an investor’s relationship to that of a unit holder is highly suited to a variety of investment mandates and, as such, is attracting interest from a number of key industry players.

GREATER DISTRIBUTION CAPABILITY WITH OPTIMUM OVERSIGHT
The ACS is acting as a springboard for managers and insurers to access multiple market places without having to run many funds. It offers asset managers a single distribution hub platform from which to distribute funds to a wide range of investor types and domiciles, while benefiting from the ACS’s tax efficient and strong regulatory and governance structure.

You can establish an ACS as a UCITS, Non-UCITS Retail Scheme (NURS) or Qualified Investor Scheme (QIS); NURS and QIS are Alternative Investment Funds under AIFMD. This allows managers to widen their investor type with a prudently regulated fund that encompasses investors from institutional, sophisticated and retail1 schemes.

Through an ACS, managers can establish a single tax-transparent fund and adjust the components to suit various regional market requirements without losing the overall benefits of fund rationalisation and tax efficiency. In this way, the ACS can provide a smarter way to distribute funds.

TAX EFFICIENCY – BETTER PERFORMANCE RETURNS
These benefits add to the more established advantages of operating a ‘tax smart’ fund. The ACS is a highly tax efficient vehicle; the tax-transparent ‘look through’ structure means investors benefit from applicable tax treaties and are treated as if they were a direct investor into those assets. Recognising withholding tax at the investor level rather than fund level removes tax drag, potentially resulting in better outcomes for investors and higher fund values for investment managers. 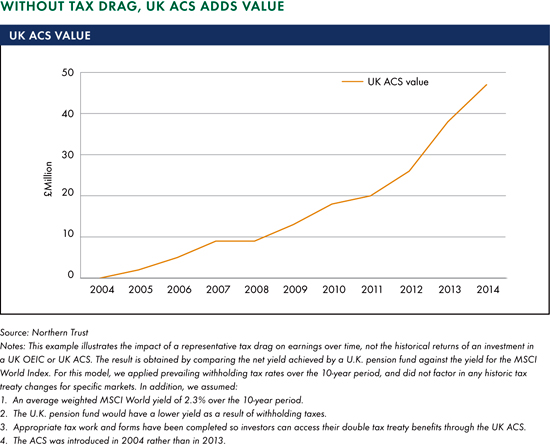 To look more closely at the benefits of removing tax drag, Northern Trust undertook a simulated analysis to chart the potential benefits of moving to an ACS structure. The model considered an initial U.K. pension fund investment of £1 billion based on an MSCI World Equity Strategy. It demonstrated that a U.K. pension fund that invested this amount via an ACS in 2004 would have a potential plan value of £1.980 billion by 2014. This compares to £1.933 billion if the same investment were made in an U.K. open-ended investment company (OEIC). The £47 million difference is due to the additional benefits available to the U.K. pension fund under the U.K. treaty network when investing through the ‘look through’ ACS as opposed to the ‘opaque’ OEIC.

While the ACS was not available in 2004 (so it would not be possible to replicate this in reality), the £47 million figure is a powerful illustration of the benefits of removing tax drag.

Moreover, by investing in an authorised fund, investors who ordinarily pay value added tax (VAT) on their asset management fees can mitigate such costs: VAT on third-party managers is removed if investing via an authorised tax-transparent fund, rather than a segregated account. This exemption may extend to other related costs of administering the scheme. VAT provisions also represent an absolute cost savings for insurers.

IS AN ACS RIGHT FOR YOU?
When weighing the benefits of establishing an ACS, be sure to look beyond tax considerations to encompass the wider range of advantages across fund rationalisation, regulatory reporting and distribution. These often-overlooked benefits will benefit the asset manager, multinational and insurer alike, with the ultimate winner being the investor.

DIRECTED TO PROFESSIONAL CLIENTS ONLY. NOT INTENDED FOR RETAIL CLIENTS.