Transparency of advisor fees, an aim of regulators everywhere, is increasing professionalism in retail financial advice. But the shift is a painful one. A panel of advisors met to discuss why.

If there is one factor that unites the world’s financial services professionals it’s the increasingly tangled web of red tape and regulation that now reaches around the globe.

Fees in the retail financial advice industry has been a key area for scrutiny. In pursuit of transparency, regulators are radically changing how firms charge for advice – and in turn impacting advisors’ revenues and business models. And while much of the industry has had its head in the sand about changes that were first mooted back in 2008, if advisors fail to respond soon, the potential consequences are all too clear.

It has been two years since the UK introduced its regulation in this space under the Retail Distribution Review (RDR). The RDR’s aim is to ensure clients of financial professionals are offered a transparent and fair charging system for advice.

Advisors in the UK are still adjusting to the new environment. But it’s far from a UK phenomenon: the Netherlands has banned commission to advisors on all retail investments to make them more transparent, and has asked advisors to be transparent with clients about the cost of advice versus product and custody charges; Germany is demanding that commission is passed to the customer when independent investment advice is offered; and in France the regulator is supporting a ban on inducements for discretionary portfolio services, while looking for greater disclosure of commissions across all savings products.

Similar transparency is spreading across the EU, with the upcoming second Markets in Financial Instruments Directive (MiFID II). But transparency goes beyond the EU, to Switzerland, South Africa, the Middle East, India, Asia and Australia. Transparency, it seems, knows no bounds. “The direction of travel is towards greater investment protection, commission bans, greater transparency of advice and product charges, and a greater focus on delivering good and fair outcomes for clients,” said Ian Woodhouse, director and member of the private banking and wealth management practice leadership at PwC, speaking at the Investec Global Advisor Forum, which hosted over 20 advisors from Asia, Europe, Africa and Latin America. 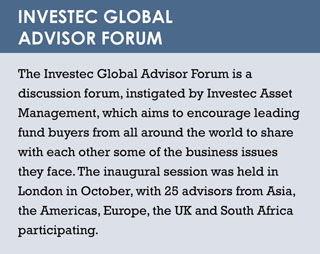 Naturally this has a huge impact on advisory firms. As the traditional commission model heads towards extinction, it becomes crucial for advisors to future-proof their business against what Woodhouse described as “seismic changes”. It’s no exaggeration.

“For the first time we’re getting regulation reshaping the business model,” Woodhouse continued. “In December 2011, before the introduction of the commission ban and the RDR regulation, the number of investment advisors in the UK stood at 38,317. By January 2014 this had fallen to 29,000 or so.”

In the UK, as a result of this regulation, some 9,000 advisors have left the industry. Around 3,700 were independent financial advisors, but the worst hit were advisors employed by the banks. Prior to RDR there were about 8,600, but this dropped to about 3,500, forcing the banks to focus tightly on the requirements for disclosure and advice.

Indeed, the reduction in advisors is just one of a raft of impacts. Reforms mean the culture and skillset of advisors must move away from the “product push” encouraged by a commission-based environment, towards delivering more “holistic” advice on a transparent footing.

PRICE WAR
While this comes at a considerable cost to advisors, the pressure on advice-only businesses will become more acute, possibly leading to further consolidation and, potentially, a price war.

This is exactly what has broken out in the Netherlands on the back of changes there. While the jury remains out on precisely what the full effect of fee transparency will be, estimates suggest the answer will become clear within 18 months. Whatever happens, it’s worth remembering that such regulation isn’t being brought in purely to make advisors’ lives a misery.

There’s clearly a client benefit in companies professionalising what they offer. Propositions become more clearly defined, with companies able to state what value they offer the client for their money. As such, the industry’s public image improves too – and that’s no bad thing. The industry has had to “wake up, smell the coffee and grow up”, as one forum attendee put it, while suggesting that still too many advisors haven’t so much as “sniffed the air” yet.

Yet it’s worth noting that, even on the client side, the effect of regulatory change and fee transparency isn’t exclusively positive. One of the unintended consequences of RDR, despite its aims to protect the clients, is to reduce the range of people who can actually afford to pay for advice. There is a growing “advice gap”, as companies move towards only taking on those clients who they can afford to, especially with the loss of trailer fees, which formerly enabled them to service smaller clients too. And where will those smaller clients go now? They can always find advice via Google, but this is surely the opposite of what the regulator intended.

Indeed, the regulators hardly escape from the situation untarnished themselves. One key problem is that those building the rules are all approaching the issue from different perspectives, taking bits they like, and doing it their own way. As such there’s currently no agreed standard, leading to a fragmentation of regulation that’s proving a real issue, particularly for global players. The hope is that this will change when the EU introduces MiFID II. But there are no guarantees there either.

Yet whatever specifics emerge over the next 18 months, one thing is already as transparent as the fees themselves: that the world of private financial advice has changed irrevocably. “It’s a global phenomenon,” said Woodhouse. “A commission-free world – no retrocessions, complete transparency, and a focus on delivering value from advice, value from products, and value from the custody of the assets.”

At least that’s what the client gets. Woodhouse was similarly precise about the implications for advisors too. “Doing nothing is probably not an option,” he said.