The European ETF industry is counting down to a new milestone, reaching $500 billion of assets under management, finds Nick Fitzpatrick. But where are the defenders of active management?

2014 saw momentum  supporting the passive fund sector continue, if not increase, with a steady flow of headlines trumpeting passive fund management at the expense of active investment. Whether this had anything to do with the rise of assets in exchange-traded funds (ETFs) or not, those assets were nevertheless nearing record levels towards the end of the year.

Europe’s exchange-traded product (ETP) industry, which includes ETFs, set a new record for assets under management (AuM) in 2014, though the industry came off its peak as the year closed. In August, AuM reached a record $477.4 billion (€388.1 billion) before dipping to $472.1 billion in November.

However, asset flows for the year until the end of November across equity, fixed income and commodity funds were at a record level of $61.8 billion.

ETFGI, which compiled the ETF data, says it expects AuM to break through the $500 billion milestone in the first half of 2015.

If the US offers Europe a signpost to the future, then the future is big. ETPs in the US reached a new record of $1.98 trillion in assets at the end of November and ETFGI expects to see assets break through the $2 trillion milestone “any day”.

Globally, ETPs also set a record, reaching $2.76 trillion in assets, and the industry is predicted to break through $3 trillion in the first half of 2015.

The London Stock Exchange (LSE) had an ETF record, too, after experiencing a £6.2 billion (€7.8 billion) order book turnover in October – a record month for ETF trading on the exchange.

Since the first product was launched on the LSE in 2000, ETF and exchange-traded commodity providers have listed more than 1,000 products at the venue.

ACTIVE MANAGERS
The rise of ETFs takes place against a background of ongoing criticism of active managers, both for performance and fees. One of the most damning reports of 2014 was from The Pensions Institute at Cass Business School, which found after a decade-long study that only 1% of fund managers were able to generate superior performance in excess of operating and trading costs. 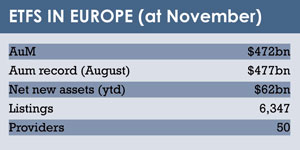 The report, which studied 516 domestic UK equity mutual funds, even found that those managers who outperformed benchmarks, “extract all of this for themselves via fees, leaving nothing for investors”. The researchers calculated that a typical investor would be almost 1.44% a year better off by switching to a low-cost passive UK equity tracker.

Findings that emphasise the importance of fund costs are behind higher investment levels in passive funds, according to Tom Rampulla, Europe managing director for US-based Vanguard, one of the world’s largest providers of ETFs.

He says data for the UK shows more investors are “voting with their feet” and moving to passive funds in light of legislative and policy changes that have shed transparency on fees.

“Recent legislative and policy changes have put fees under greater scrutiny in the UK. This increased push for transparency has made investors more aware of the importance of costs in the investment decision-making process,” Rampulla says.

He adds: “The result is that investors are voting with their feet and allocating a greater share of their assets to lower cost mutual funds and ETFs. Investment Management Association data shows that 40% of UK retail flows in the third quarter of 2014 went into index trackers. This shows that investors understand the importance of costs.”

Low-costs coupled with criticism of active managers combine to make a powerful fuel for the propulsion of ETFs and other passive funds. If things continue as they are then 2015 should see the major milestone broken as European ETFs reach $500 million in assets.

Yet the active fund management industry remains remarkably quiet in all this unless, that is, they are themselves using ETFs for asset allocation, which is seemingly a growing trend.

ADD ALPHA
“ETFs and tracker funds are an obvious threat to active managers of single asset class funds due to the proliferation of passive vehicles in the last few years, accelerated by the arrival of US ETF managers into the marketplace. But that’s from a single asset class perspective.”

Active multi-asset class managers, Sippetts writes in a note on the firm’s website, invest across the full spectrum of investment instruments and have more levers to add alpha.

“Multi-asset managers have more opportunity to add alpha through an active tactical allocation process, and should openly welcome the increased number of ETFs.

“These are essential tools, not second-class citizens to be looked down on.”

The active fund management industry is still awaiting its champion. Perhaps this champion will arise in 2015, but only after the ETF industry passes one more milestone.