The winner of this year’s European Personality of the Year has highlighted the critical role that trade bodies play in the funds industry, helping to shape UK and EU policy.

As chairman of the BVI, the German Investment Funds Association, Thomas Richter is simply one of the best representatives the industry has to offer; a true leader who has repeatedly embraced difficult and thorny issues that affect the funds industry and its clients. 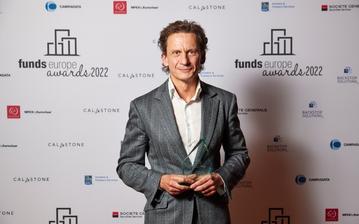 n the view of the Funds Europe panel, Richter is acknowledged for consistently “raising his head above the parapet” on issues ranging from the integrity of investor information to the high costs of market data that the funds industry has to contend with while being under relentless pressure to control fees.

Richter has been with the BVI since July 2011. He originally trained as a lawyer in France and worked for a Canadian law firm before becoming a certified equities trader and investment analyst in Germany.

He joined Deutsche Börse in 1995 and then joined German asset manager DWS three years later, where he held various executive positions before becoming an executive board member in 2007.

When asked about his hopes for the future, Richter told Funds Europe that he hopes to see more equilibrium in regulation. “Right now, the interests of consumers and resilience play a predominant role, but the interests of our industry do not have the same prominence.

“We are in a global market, and for the sake of competitiveness, it is really important to have a better balance between all of these interests.”