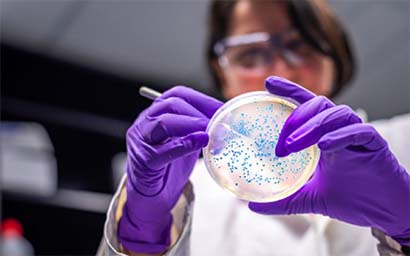 Biotechnology – in the spotlight thanks to Covid-19 – surpasses even digital in terms of its scope to transform this century. Much of its funding comes from private equity, where investors face ethical as well as financial dilemmas. Alex Rolandi reports.

Healthcare has had a year like no other for at least two reasons. The first is obvious. The second is all about investment.

In April, for example, healthcare ETFs saw their highest level of inflows – $7.3 billion at the global level. And although this amounted to just $0.5 billion in Europe, even that was a regional record. BlackRock, which published the numbers, said the interest in medical device production and in pharmaceutical innovation had offered investors two rationales for investing in the sector.

At Goldman Sachs Asset Management (GSAM), Luke Barrs – a portfolio management leader – said that the pandemic had “supercharged an existing secular trend and pushed healthcare right to the top of governments’ and societies’ priorities”. He was speaking as GSAM launched a healthcare public equity fund.

Meanwhile, in the private equity world, it’s a similar picture. A DNA sequencer the size of a chocolate bar attracted investment from RPMI Railpen, the investment manager of the UK’s Railways Pension Scheme, this year. Specifically, Railpen invested in Oxford Nanopore Technologies, the company behind the project, which is aiming to bring biotechnology to the mass market.

Microbiologist Andrew Hessel is chairman of Genome Project-write, a collaborative research effort focusing on large-scale synthesis and editing of genomes. A geneticist himself, he says molecular science is evolving dramatically, with scientists able to write genetic code to their own design, for example, and the programming of synthesised viruses to destroy cancer cells using computer-aided design.

“It’s really just a case of hanging on for the ride as we start to figure out how these things become useful to our everyday lives, rather than very elite R&D projects,” he tells Funds Europe.

Pivotal capital
Private equity and venture capital play a key role in this journey. In the first half of 2020, the healthcare industry was the leading target for private equity and venture capital investment, raising nearly $12.6 billion (€10.6 billion) in funding, according to S&P Global Market Intelligence. The development of a vaccine for Covid-19 was one driver – but so are other areas of biotechnology, including gene sequencing to detect and destroy viruses in human cells and the ‘biohacking’ of DNA.

Over the past decade, the aggregate deal value has grown from $4.2 billion to $27.1 billion.

“Private and venture capital is pivotal”, says David Pinniger, a fund manager on asset manager Polar Capital’s healthcare team. “It’s the only way things move ahead. Without that capital and funding, and the provision of commercial expertise, a lot of this stuff would be left to swim around in academia.”

Private equity: Biotechnology dilemmas and the "potential for harm"

Private equity has funded the growth of biotech at the early stages where much of the experimental innovation can be found. However, while investors in biotech through public equities such as healthcare ETFs expect companies to have satisfied a plethora of rules and regulations pertaining to safety and ethics, due diligence for venture and private investment is an onerous process – ensuring biotechnology isn’t used in nefarious ways and that the underlying science is ethically sound, for example. “The core of the technology is agnostic, it’s human intention,” says geneticist Hessel. “There’s always the potential for harm.”

Nina Deka, senior research analyst at Robo Global, which produces benchmark indices, says the “really cool stuff” in biotech is happening at the research level. But she adds that declining costs have partially democratised biotech, opening the door for more people to become involved, and this has further accelerated developments in areas such as genetics.

Staying one step ahead of the game with safeguards in check is “the only way around” the risks, says Deka. “Either that, or we don’t progress.”

Private funds are going into this area “with their eyes open”, according to Michael Johnson, group head of institutional services at corporate services firm Crestbridge. At least, if they apply a product roadmap correctly.

Johnson says this includes checking the science behind the potential product, as well as looking at pre-clinical pharmacology and toxicology reviews. Due diligence also means investigating chemical manufacturing and supply chains. More broadly, it’s about identifying which intellectual property rights exist or are likely to in the future.

As with all developing technologies, there are new and evolving risks to contend with. Indeed, Polar Capital’s Pinniger says investors need to make sure everything is “nailed down”, adding: “They’re putting capital into quite early-stage companies in situations where the biology is still sometimes unclear or unknown.”

One ethical question that crops up repeatedly when it comes to molecular science is whether capital is being allocated to companies that use human embryos in their research, he adds.

Safeguarding the future
How to take all this forward as the technology evolves is an important issue for Ian Connatty. As managing director of British Patient Capital, he oversees a UK-government backed investment vehicle focused on venture and growth capital funds.

“There are a lot of disciplines coming together,” he says, so that now is a “very crucial time to make sure there are certain safety protocols or safeguards in check, as we don’t know how these things could develop”.

According to Hessel, an industry consortium was set up around 15 years ago when scientists recognised a “significant” intersection for biosafety and biosecurity at the point where a design is transferred from the virtual to the physical. “In the synthetic biology world, that’s usually when you start to synthesise the genetic code,” he says.

Major DNA synthesisers “signed on to, created and participated” in the consortium, which determined what was too dangerous and too close to ‘playing God’.

“Is it perfect? No. But it probably shows more foresight than the early days of computing, when people wrote computer software that was buggy and potentially had a lot of faults,” he argues, recalling Y2K.

In November 2020, it was reported that state-sponsored hackers, suspected to be North Korean, had been caught attempting to steal coronavirus vaccine secrets from various biotech companies, including AstraZeneca.

Experience with computing offers the best sense of how to regulate and control biotech, says Hessel. There will always be bad actors, “but nobody will make the case that because computers are insecure and can be used nefariously, we should shut them down and get rid of them”.

The consensus is that the positives far outweigh the negatives, but the complexity of how the biotech industry evolves is going to intensify with time.

Investors in life sciences are essentially backing developments that could determine the future of the human race. Hessel says he’s “delighted and sometimes amazed” by how far things have come.

Science fact
Changes in the course of the 21st century – hailed as the biotech century – will be more dramatic and fast-paced than those of the 20th, Hessel predicts.

It’s nearly 20 years since scientists sequenced the human genome, and concepts such as designer babies are no longer science-fiction. Rogue Chinese scientist He Jiankui demonstrated this when he created genetically edited babies, a breach of regulations that led to a three-year jail sentence in 2019.

Agustin Mohedas, a senior biotech research analyst at fund manager Janus Henderson, points out some of biotech’s other applications. “We have gene therapy technology, CRISPR technology, all these new underlying technologies,” he says. (CRISPR – short for ‘clusters of regularly interspaced short palindromic repeats’ – is a technology used to edit genes, be they human, mosquito or any other life form. )

“We now know much more about the genetics and mechanisms of diseases such as cancer, so our toolkit is better,” says Mohedas. “We know what the problems are, and therefore we can come up with solutions more readily.”

The vast possibilities in biotechnology have led to a steady flow of projects and companies searching for the next breakthrough, says Crestbridge’s Johnson. “For now, there’s certainly a feeling in the private [markets] industry that biotech will never be the same again,” he says. “Never before in human history has a vaccine been this close to being developed this quickly, and that takes a huge amount of resourcefulness and agility.”