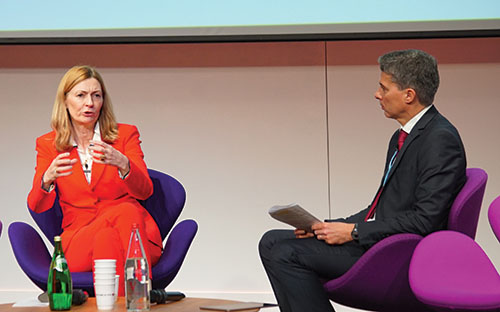 The funds industry will have to move away from the free-market model of constant economic growth if it wants to address the challenges of climate change, Anne Richards, CEO of Fidelity International, told the SGSS European Investor Summit.

In an outspoken intervention in November, Anne Richards – chief executive of one of Europe’s largest asset management houses, Fidelity International – said that the economic assumptions of previous generations were being tested and had been “found wanting” and that the funds industry was “on the cusp of a great disruption”.

In a keynote speech entitled ‘The New Scarcity’, the head of the $310 billion fund house said a transformation of the world’s economic model was needed to “change the system that allocates the scarce resources on this planet”.

The call for a rethink of one of the central tenets of capitalism – made by Richards at the European Investor Summit organised by Societe Generale Securities Services – followed a similarly outspoken intervention last month from Andreas Utermann, the chief executive of Allianz Global Investors, who told a conference in London that the orthodoxy of pursuing GDP growth, supported by population growth and the maximisation of corporate profits, was unsustainable if the world was serious about tackling climate change.

Capitalism in its current form, he was quoted as saying, involved “borrowing from the future while destroying the environment”.

Richards, previously the chief executive of M&G Investments, said that the funds industry will have to adapt if it wants to “play a role in shaping” a more sustainable economic model.

The two central pillars of economist Milton Friedman, which had been in place since the 1970s, had “both hit a bit of a wall”, said Richards. The first of those was monetarism – which claims a close and stable relationship between inflation and money supply. But today’s environment of negative interest rates and low inflation showed that “the relationship between money supply and inflation has broken down”.

It was increasingly clear, said Richards, that Friedman’s second pillar, his doctrine of shareholder primacy – the belief that firms should be run first and foremost for the benefit of their shareholders – had also run its course.

“Today, some companies – huge, global and powerful – are beginning to eclipse the role of governments,” she added. “As a result, even the chief executives of the biggest corporates have said that running them solely for the benefit of equity owners is no longer an option.”

Given the amount that humans now consume and waste, a move to a circular economy is needed, she concluded, as this would allow moving “from a linear world in which we make, consume and then dispose of products to one where waste can be fed back into the system as a raw material”. She warned: “Our challenge is to move to a steady-state circular economy, to reuse and reprocess, because eventually, it won’t be a matter of choice.”

Just 9% of the world economy currently can be considered circular, in which goods are recycled or reused.

However, recent events, such as the marches organised by Greta Thunberg to the proposals for a green New Deal in the US, showed that a new economic philosophy is now beginning to take hold in the minds of the general public as well as policymakers.

“Today’s young are already weighed down with concern about whether there will be a planet left to inherit from their parents,” said Richards. “Forget shiny cars. They will ask why, when 93% of cars are empty and parked at any one time, do we need so many? Could we not share?”

The investment industry needs to adapt its processes to account for this new and changing world. “I doubt our measures of economic health today, such as manufacturing data and GDP, will really reflect the success or failure of our societies in future. Our job will become less about finding the best short-term returns and rather more about discovering sustainable businesses to invest in.

“Gone are the days where the chief executive of a company could focus on earnings as the single measure of success. The economic paradigms we’ve relied on in the past solved the problems of scarcity of the past. But if our capital markets are to survive as a system well into the next century, they must solve the scarcity problems of the future.

“And more than that, they must reflect the interest of the majority of people or risk their very licence to operate.”