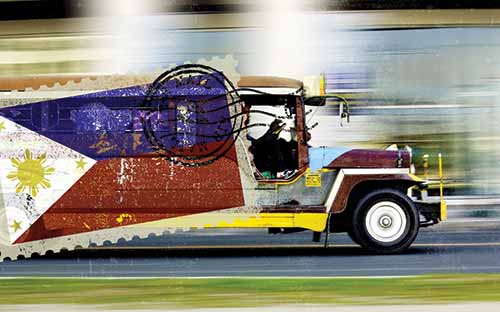 Construction work is centred on transport infrastructure in and around Manila, and it’s easy to see why. Persistently we found ourselves stuck behind fleets of Jeepneys – the ubiquitous former US army vehicles repurposed as colourful buses that serve as a garish backdrop.

The capital’s lack of a subway system necessitates hours of travelling to and from work for residents used to such hardship. But the productivity losses that the economy suffers as a result are astonishing. It’s something Duterte has rightly prioritised.

There are 75 flagship infrastructure projects underway or planned, mostly funded by the central government. They include a northward rail line to Clark airport, which itself is being regenerated; a southern Manila commuter line; and a metro Manila subway.

The latter is scheduled to be opened partially by the end of Duterte’s six-year term in 2022. It can’t come soon enough. The goal is to spread this progress to up-and-coming cities.

To pay for it, last year the government raised consumption tax in areas such as fuel, alcohol and tobacco – so-called sin taxes. That hit the average person’s pocket during a period of heightened inflation and currency weakness.

Raising taxes to invest in infrastructure is a textbook policy to develop an economy. A previous cycle of rate hikes helped to tame inflation, and this year consumption has started to recover. Evidently Duterte has some unorthodox views, but his administration is packed with talented technocrats. They provide welcome economic level-headedness.

Helpful conversations
One risk to monitor relates to the legislative agenda. The Tax Reform for Attracting Better and Higher Quality Opportunities – or TRABAHO, which hardly trips off the tongue – could create challenges for the business process outsourcing (BPO) sector.

This is a strategically important industry that accounts for almost as much of the nation’s hard currency inflows as remittances. To simplify the tax framework, the government has proposed replacing tax incentives for foreign businesses with a lower corporate tax rate.

It is also mulling whether to sever foreign firms’ engagement with the Philippines Economic Zone Authority, which has served as a one-stop shop for securing business licence approvals. If passed, foreign companies would be left to navigate local rules and practices themselves.

When we consulted members of the BPO trade body, they voiced concerns that this would increase the relative cost of doing business in the Philippines up to 20% higher than India. That would be ill-timed. Net foreign direct investment is already falling short of financing the current account deficit.

By the end of our trip we had grown more pessimistic about the nation’s near-term growth prospects. We knew that GDP growth was slowing. The 2019 budget was only signed off in April and mid-term elections took place in mid-May. Even then spending restrictions were a feature.

It led us to lower our GDP growth forecasts for the second quarter comfortably below consensus. The growth figure of 5.5%, confirmed subsequently, proved us right. It means the government now needs to ramp up spending to meet its annual 6-7% growth target. Fiscal and trade data indicate this isn’t happening quickly. Typhoon season in the third quarter could also hamper efforts to get infrastructure projects moving.

But this is a strategic priority, so we expect an acceleration in spending sooner or later. When that materialises, it will widen the current account deficit and put pressure on the peso. It explains why we underweight the currency currently.

Another factor to feature in our conversations was liquidity conditions. We were aware that credit growth was falling and that banks were increasingly not in a position to lend.

The Treasury Bureau has ploughed ahead with government bond auctions, which have been oversubscribed. This could create the impression that companies had sufficient liquidity at their disposal.

But private sector investors told us a different story, highlighting some of the difficulties they were facing in securing financing for investment projects. Speaking to companies directly is often a good way to get to grips with economic realities on the ground.

Already this year, authorities have cut interest rates twice and reduced the cash reserve ratio that banks are required to hold three times. That, at least, has relieved pressure at the front-end of the yield curve for corporates looking to borrow. We expect more of the same.

Removing bottlenecks
While we came away more pessimistic about the near term, context is everything. This is still an economy expanding at 5.5% a year, with a young and growing population and an educated workforce.

Policymaking is orthodox and efforts to move towards free tertiary education and universal health care are commendable in a country where GDP per capita is just $3,000.

Now we want to see evidence that the government is getting its spending plans back on track after delays, because that has consequences for the currency and interest rates.

Over the medium term, we’d like to see the benefits of these infrastructure initiatives filtering through. That would have positive implications for productivity and potentially foreign investment, too.

More than anything it would help to improve the quality of people’s lives. Perhaps then we might be spared the bottleneck of Jeepneys on one of our future trips.

Disclaimer:
Risk factors you should consider before investing: The value of shares and the income from them can go down as well as up and investors may get back less than the amount invested. Investing globally can bring additional returns and diversify risk. A full list of risks is available on www aberdeenstandard.com
Important information: The information contained in this document is of a general nature on the activities carried out by the entities listed below. This information is therefore only indicative and does not constitute any form of contractual agreement, nor is it to be considered as an offer, investment recommendation nor solicitation to deal in any financial instruments or engage in any investment service or activity.
No warranty whatsoever is given and no liability whatsoever is accepted for any loss arising whether directly or indirectly as a result of the reader, any person or group of persons acting on any information, opinion or estimate contained in this document.
Tax treatment depends on the individual circumstances of each investor and may be subject to change in the future.
Issued in the EU by Aberdeen Asset Managers Limited. Authorised and regulated by the Financial Conduct Authority in the United Kingdom. Registered Office: 10 Queen’s Terrace, Aberdeen AB10 1XL. Registered in Scotland No. 108419.