The Island of Jersey – a constitutional but not political part of the United Kingdom (UK) – is placed in an interesting position by Brexit, given that the Channel Islands are outside the European Union (EU) already.

This doesn’t mean Jersey won’t be affected by Brexit, but it does mean it may fare better than the floundering mothership. A Jersey Finance/Funds Europe fund structuring survey offers pointers as to how.

Based on responses from 54 Funds Europe readers across the industry, the recently conducted study (called ‘Evolution of European fund structuring’) shows 83% expect to raise more money from the EU than the UK in the coming 12 months.

Geoff Cook, CEO of Jersey Finance, expects this result is based on the large sums raised from property last year. “The run of real estate funds was Brexit-related,” he says. “When the pound changed, it made UK assets more attractive for European buyers.”

In the first half of this year, capital raising was strong, with total assets under administration in Jersey up 18% to £263 billion. However, there was a slight difference in asset class.

Best asset class
The fund structuring survey reflects an expectation among readers that private equity will be one of the asset classes that continues to grow over the coming 12 months. The island’s private equity sector received a boost in May this year when SoftBank selected Jersey for the structuring of its Vision fund, which invests in the technology sector and raised over $90 billion in committed capital.

However, firms see the biggest growth opportunity in infrastructure funds. Infrastructure requirements in emerging markets are driving this in part, but renewal in developed markets is also important. “Most developed countries have quite a lot of ageing infrastructure,” says Cook.

One of the stated attractions of Jersey for the SoftBank Vision fund, which is backed by the Saudi Arabia and United Arab Emirates sovereign wealth funds as well as by tech firms Apple, Qualcomm and Sharp, was its flexibility in establishing EU and non-EU funds.

“We’re seeing increased use of our national private placement regime,” says Cook. “However, if people want AIFMD compliance, we do have an AIFMD-equivalent regime as well.”

Jersey has also been passed as equivalent by the European Securities and Markets Authority twice. This enhances its status within the EU, but it must still conclude bilateral agreements with each EU country. 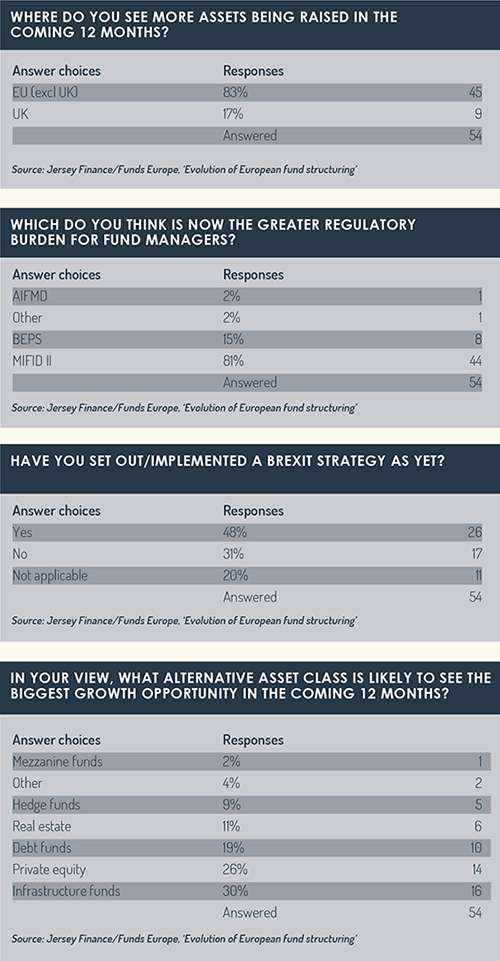 Had the Brexit vote not happened, the next step for Jersey would have been to seek a third-country passport. For now, this has been put on the shelf, says Cook, because “the EU’s technocratic capacity is devoted entirely to Brexit”. In practical terms, this isn’t really an issue for Jersey, as it has 40 years’ experience of working with the EU on an equivalence basis.

“We are where the UK wants to be,” says Cook. “It’s taken us many years to get there.”

Building confidence
This could be a fruitful area of business for Jersey, with less than half (48%) of respondents to the fund structuring survey saying they had already set out or implemented a Brexit strategy, leaving a significant number still needing support.

“We’re providing a framework that gives fund managers the confidence that they can carry on business after Brexit,” says Cook.

For now, Jersey has not implemented a Markets in Financial Instruments Directive (MiFID) equivalence regime. In the fund structuring survey, 81% of respondents said MiFID II represented the greatest regulatory burden for fund managers. The Jersey regulator is looking at whether to introduce equivalent regulations or just to comply selectively.

“MiFID II is more about the end customer,” says Cook. “We tend to have an institutional client base.”

In a potentially disruptive period, flows from institutional investors such as pension funds look set to continue in Jersey. The drive for returns is strong, and pension funds are making fresh commitments to alternatives. “As the world becomes more unstable, our platform offers the kind of stability managers are looking for,” says Cook.