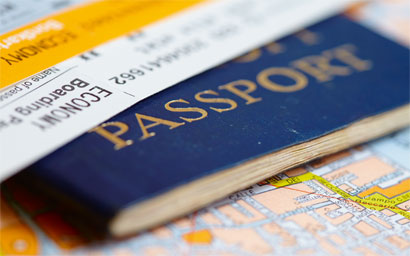 The Asia Region Funds Passport is due to launch in 2018. But will it catch on? George Mitton reports.

While most of the developed world was mired in the 2008 financial crisis, policy-makers in Australia dreamed up the Asia Region Funds Passport (ARFP).

It was a simple idea: a framework to allow eligible funds to be marketed and sold across the region.

Through twists and turns, the ARFP project is at last reaching launch. The project’s joint committee says it expects the passport to go live in the first half of 2018. But there are challenges ahead.

High hopes
Few in the funds world doubt the potential of passporting. Launched in the mid-1980s, the Ucits regime in Europe has shown how cross-border collaboration can create a large market for asset managers. So popular is Ucits that the funds are sold widely outside Europe too.

ARFP hopes to realise efficiency gains for asset managers by allowing them to sell their funds into multiple markets. According to the Asia-Pacific Economic Cooperation, the ARFP could save Asian investors $20 billion a year in fund management costs.

“The ARFP is a great initiative to allow movement of capital between the participating economies that would lead to expansion of local and regional asset management talent,” says Armin Choksey, partner for asset management at PwC. “The competition will enhance sophistication among participants as well. It is a programme long awaited in the region and an excellent opportunity for managers in the West to access the Asian continent in a more efficient way.”

However, the first problem facing the ARFP is that Asia today is nowhere near as harmonised as Europe was in the 1980s. This fragmentation explains why the passport has struggled to attract and retain participating members. Five nations back the scheme: Japan, Australia, New Zealand, South Korea and Thailand. Together, they account for 6% of the region’s population.

The ARFP scheme says a number of other countries are considering joining at a later date, including the likes of India and Indonesia. But for now, the passport applies to only a fragment of the Asia-Pacific region.

Rival feeders
Any passporting scheme has to start somewhere. The ARFP will officially be inaugurated when at least two of the participating countries formally confirm its implementation. Thailand is reportedly keen to begin the initiative by signing up alongside Australia. New Zealand is also likely to sign up from the beginning. In theory, any time from January 1, 2018, the ARFP could begin.

But the mere ability to launch ARFP funds will not guarantee that asset managers will see a commercial benefit in launching them. One problem is competition from existing products, namely feeder and fund-of-fund products. These have been popular in Thailand, for example, where they account for about a tenth of assets under management. 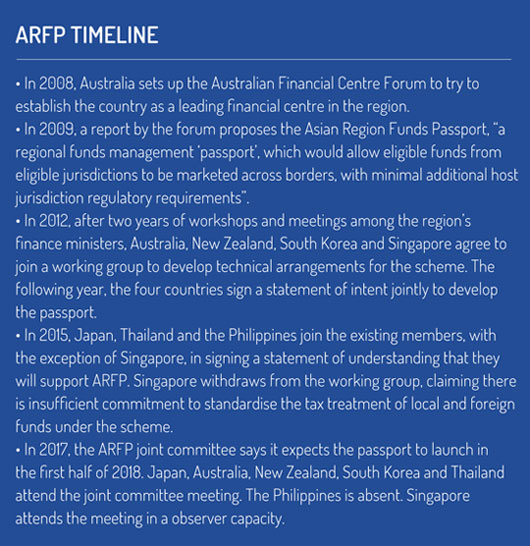 These funds are a convenient way for asset managers to offer global exposure within a locally domiciled fund vehicle. Typically, the parent fund invests in a series of Ucits funds, often sourced through Singapore.

“The host fund company has the opportunity to identify, select and control which Ucits they use, they control domestic pricing of the products offered, and usually buy institutional share classes to obtain the lowest TER [total expense ratio] of the Ucits,” says Stewart Aldcroft, senior adviser at Citi Markets and Securities Services. “JP Morgan have been very successful in this area. ARFP will find it difficult to compete against this in those markets where they are offered.”

Not neutral
Another problem facing the ARPF is tax. Consultants have long argued that, for pan-Asian passporting to be a success, participating countries must commit to a level playing field in which foreign funds are not subject to a different tax regime from locally domiciled ones. Without tax neutrality, they say, investors will naturally favour local funds at the expense of passported funds.

The tax problem has already proved divisive in negotiations around the ARFP. Singapore chose to withdraw from the scheme in 2015 because, in its view, the ARFP countries were not sufficiently committed to achieving tax neutrality.

That was a blow. Some had speculated that Singapore could become the equivalent, for the ARFP, of what Luxembourg is in Europe – a trusted fund domicile and hub for cross-border investments.

Two years on, the tax problem has still not been resolved. Tax regimes in Australia and South Korea, for example, still treat offshore and domestic funds differently. The ARFP joint committee has a tax working group whose aim is “to harmonise, to the extent practicable, tax laws affecting the passport”. The working group still has a lot of work to do.

Rigmarole
Indeed there is still much for regulators in several markets to accomplish. To meet the needs of ARFP, Australia, for instance, is developing a new fund structure, the corporate collective investment vehicle (CCIV), because its existing mutual funds and unit trusts are not suitable for use in overseas markets.

While regulators concentrate on their paperwork, some say they have neglected the task of bringing the asset management industry on board and encouraging fund managers to participate.

“Many [asset managers] don’t see the point, and consider the costs of going through the rigmarole of obtaining multiple regulatory approvals for each fund they wish to put on the ARFP platform as being far too expensive for an unproven development,” says Aldcroft. “Each and every ARFP regulator will need to do their own individual approval, per fund, and that also is an issue that needs to be addressed. A central registration process would be far better.”

The experience of other fund passports in the region suggests that attracting fund managers takes time. As of November 2017, only nine funds have been launched under the ASEAN Collective Investment Scheme, which went live in August 2014 and includes Malaysia, Singapore and Thailand.

The mutual recognition of funds (MRF) scheme, which unites Hong Kong and mainland China, has had more success. As of November 1, six northbound funds and 24 southbound funds had been launched, with several more having gained regulatory approval. However, as a bilateral and not a multilateral scheme, MRF faces challenges far less complex than those facing the ARFP.

While ARFP develops, many fund managers in Asia will probably continue to rely on Ucits. Although developed for the European market, Ucits at least has the advantage of being tried and tested. ARFP has yet to prove its worth.

This article was first published in Funds Global Asia